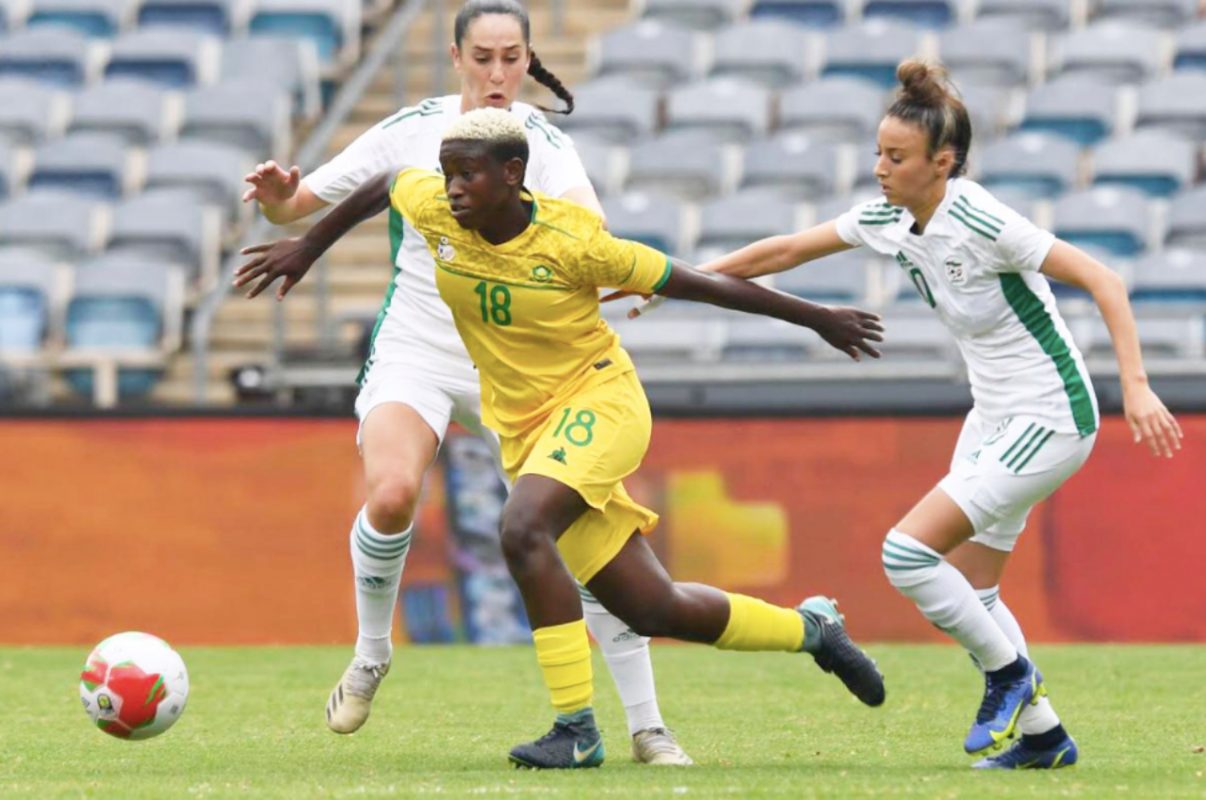 Banyana Banyana gained the first leg advantage with a battling 2-0 win over Algeria in a tight Africa Women’s Cup of Nations match (AWCON) played at Orlando Stadium on Friday afternoon.

Predictably, the home team started off the better side creating several goal scoring opportunities but somehow were unable to convert those chances as an early breakthrough proved elusive.

However, in-form Hildah Magaia was not going to be denied as she found the opener in the 40th minute to put the hosts in the driving seat at the half-time break.

The visitors improved in the second half but were unable to break through a well drilled South African defence, well marshalled by Noko Matlou.

Lively Thembi Kgatlana who had given the visitors defence a torrid time the whole afternoon, finally buried a chance in the 89th minute and sealed the victory for Banyana Banyana.

Head coach Desiree Ellis believes not conceding will be vital when the team travels to North Africa for the second leg.

“We analysed them and we felt that they were going to sit back in the first away leg to try not to concede. We worked hard to breach their defence and the 2-0 win should put us in good stead in the second leg,” said Ellis.

“We switched off right at the beginning and they could have taken the lead but for most of the game we were in control. We created a lot of opportunities but I felt we played at their pace and we had to tell our players to speed the game up and retain the ball quicker.

“The tie is not over though and we have to make sure that we do not concede. We have to be aware of the long balls and I felt Bambanani Mbane and Noko Matlou dealt well with the balls this afternoon because we prepared for it,” she added.

“You could tell Algeria are a team with a good fighting spirit and they did not give up.

“Thembi Kgatlana asked me how long to go before 90 minutes and two minutes later the ball was in the back of the net. We needed that second goal because when you play away from home, it can becomes difficult,” concluded Ellis.

Sasol’s Senior Manager: Group Brand and Sponsorships Nozipho Mbatha also expressed her relief with Banyana’s result as the team will travel for the second leg scheduled to take place on Wednesday, 23 February in Algeria.

“A massive congratulations to Banyana Banyana. This was a vital match and they came out of it with flying colours. This result puts the team in good stead ahead of the return leg in Algeria next week and we have no doubt they will fly the flag high once more and reach their goal of qualifying for the 2022 Africa Women Cup of Nations tournament.”