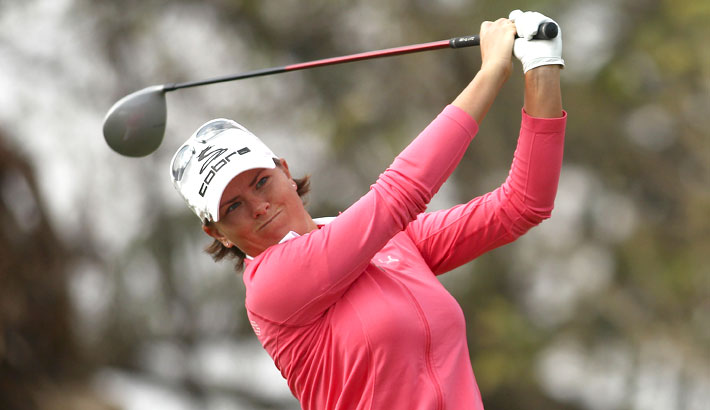 South Africa’s Lee-Anne Pace was voted the ‘Player’s Player of the Year’ by her fellow professional golfers on the Ladies European Tour, three years after last winning this award in 2010.

Pace was the only player to win three titles on the LET in 2013, taking her career total to eight wins.

A model of consistency throughout the season, she claimed the Turkish Airlines Ladies Open in May, the Open de Espana in July and the Sanya Ladies Open in China in October.

Pace notched six additional top ten finishes – including a second place at the Allianz Ladies Slovak Open – and ended the year ranked second on the ISPS HANDA Order of Merit with season’s earnings of €250,927.42, behind Suzann Pettersen with €518,448.81.

“To win an award is always great but to be recognized by your peers for your achievements is a huge honor. I feel very proud and humbled and would like to thank everyone that voted for me,” said the 32-year-old from Mossel Bay.

“I had a lot of fun this year and played very consistently which put me in contention many times. I was very happy to win again and to do it three times just turned it into an amazing and unforgettable year.

“I think my attitude and demeanour this year was the same as in 2010. I felt very focused, relaxed and in control. My shot making ability is probably better now but all in all it’s very similar.”

“Every single win is very special and some of the shots I hit to achieve them will always stand out in my memory. It’s a really good feeling to wake up in the morning and know you have a chance to win and then to pull it off it feels very rewarding,” she said.

Looking ahead, Pace said: “For the moment I am only longing for my vacation with my family and friends when I get home in a week. I need a bit of TLC with a braai, a glass of red wine and my own bed!

“I would like to thank my two coaches, Val Holland and James Petts who have both played a major part in my success this year.

“I would like to thank and congratulate my caddy Mark Britton for a great and unforgettable year. I loved the way we played golf this year and it was such a pleasure to work with him. He gave me confidence and belief and did an exceptional job this year.

“I would also like to thank my sponsors Investec, Puma/Cobra, First Car Rental and Oakley for their ongoing support and for making this year possible for me. Thank you to the LET and all the staff for all their hard work. A big thanks to all my supporters and all the messages and tweets this year. It’s always great to be supported and to receive words of encouragement.

“Thank you to all the sponsors, promoters and volunteers for supporting the LET and making it another successful year for ladies’ golf in Europe.”

Photo Caption: South Africa’s Lee-Anne Pace capped off a successful 2013 when she was voted Player’s Player of the Year by her LET peers. In this file photo, Pace tees off on the 15th during day 2 of the SA Womens’ Golf Open at Selborne Country Club, on July 14, 2012 in KwaZulu Natal. Photo: Shaun Roy / Gallo Images