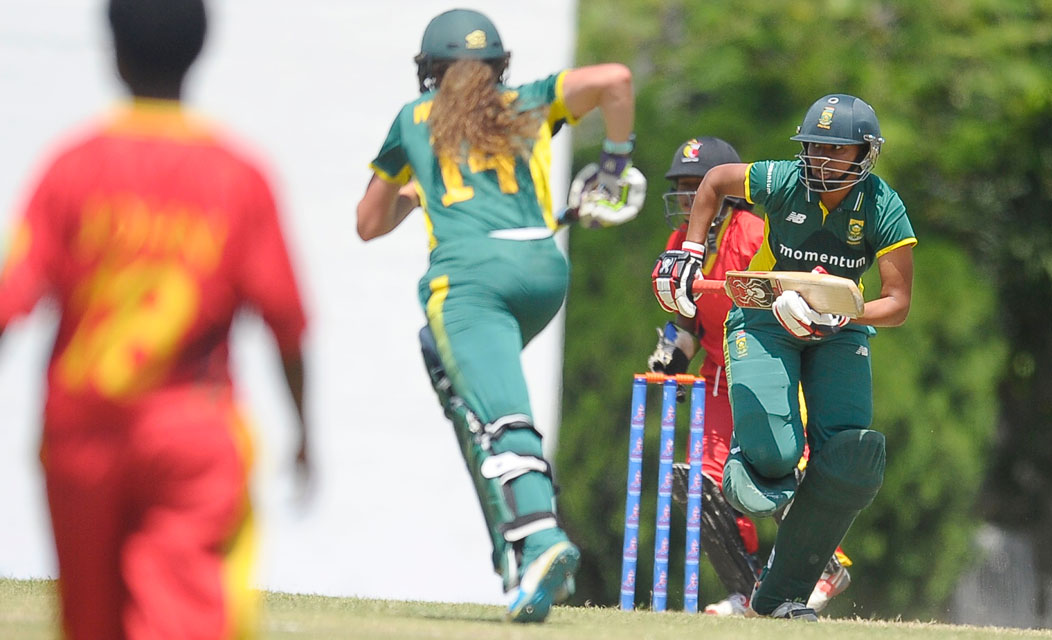 South Africa romped home to top their final group-stage outing in the ICC Women’s World Cup Qualifier series with an emphatic 10-wicket win over Papua New Guinea, who frittered away a strong opening to collapse to 76 all-out at the Nondescript Cricket Club grounds in Sri Lanka on Monday, 13 February, 2017.

Shabnim Ismail, Youlanie Fourie and Sune Luus picked up two wickets each in a clinical bowling performance that shot PNG out for 76 in 32.4 overs. A team that prides itself on its positivity, PNG couldn’t quite bring itself to fight back.

Dane van Niekerk’s side chased down the total in 13.1 overs, and went into the Super Six round undefeated from Group B.

Having already sealed qualification for the Super Six stage, South Africa rested two important cogs in its pace attack in Marizanne Kapp and Ayabonga Khaka. Ismail, who had been instrumental in dismantling the Bangladesh top order last week, earned another Player of the Match award for her disciplined performance.

But given the high standards the South Africans have set for themselves, Monday’s new-ball attack with Moseline Daniels, the left-arm medium pacer, perhaps lacked the same nip, even if it missed none of the efficacy.

Playing with little to lose in its last game, PNG approached the match in the right spirit.

The second-wicket pair of Brenda Tau, the left-hand opening batter, and Pauke Siaka, the captain, demonstrated great confidence in finding the boundaries and scampering the singles, and both were strong behind square.

Tau, who narrowly missed a fifty in the previous match against Scotland on Saturday, looked like someone with unfinished business and pulled out some impressive drives. She kept going after she lost Siaka – caught at cover off Marcia Letsoalo – and Konio Oala – easy catch to mid-on in van Niekerk’s first over – bringing up the team fifty in the 21st over with a long-on four.

Luus was rewarded for her good lengths, but wasn’t afraid to go full to tempt the batters, and the two wickets in her second over changed the complexion of the game.

When South Africa began its reply, Laura Wolvaardt indicated that the big-hitting Lizelle Lee – also rested – might not be missed, with a straight four to open the innings.

Then it was simply about waiting for the wayward delivery and dispatching it to the boundary. She hit nine fours around the ground on her way to an unbeaten 43, while Lara Goodall, playing her first game of the tournament, was 28 not out.

“I thought that we got better throughout the tournament,” said van Niekerk. “We said we wanted to be clinical and we were, today.

“We won the game with 10 wickets, which is what you’d expect chasing low totals. That’s something we rectified. I can’t fault our bowlers. Hopefully again, we’re just searching for that perfect game.”

Photo 2 caption: Laura Wolfvaardt cuts a ball towards the square-leg boundary in her unbroken innings of 43* (52 balls), in which she shared an unbroken opening partnership of 77 with Goodall. Already qualified for the Super Sixes phase of the qualifier tournament after their win against Bangladesh, the group stage result means that SA will also participate in the ICC top tier ODI tournament for the next four years. Photo: ICC

Photo 4 caption: Momentum Proteas opening bowler Shabnim Ismail smiles with her second consecutive Player of the Match Award for her figures of 6.4-1-13-2, one of three bowlers including Yolani Fourie and Sune Luus to strike twice in SA’s fielding innings. Photo: ICC