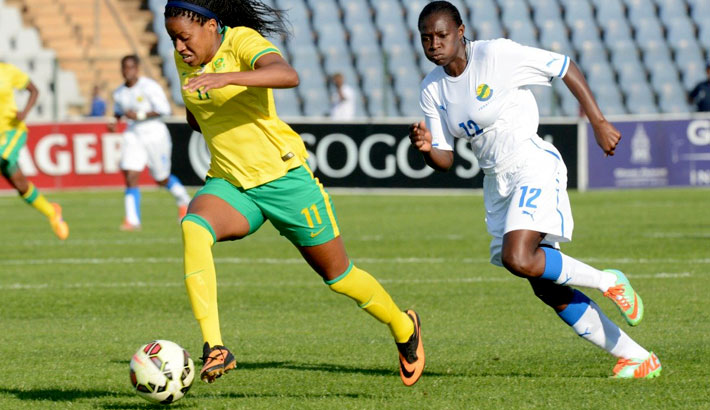 Banyana Banyana and Equatorial Guinea played to a goalless draw in the first leg of the final 2016 Rio Olympic qualifier on Saturday, 3 October at Makhulong Stadium in Tembisa.

The hosts created better chances of the match but failed to convert those that came their way as they go into the second leg away from home without a single goal to defend.

The first of those clear-cut chances came on the 34th minute when defender Noko Matlou out-jumped everyone only to see her header go wide from a corner kick.

Three minutes later, the home team was caught napping but goalkeeper Roxanne Barker who had a blinder of a game made a brilliant save to deny Equatorial Guinea.

Banyana Banyana had another great opportunity of the half on the 40th minute after a good build-up which started from the back.

It resulted in a great defence-splitting pass from Sanah Mollo which was met by Refiloe Jane who out-sprinted the defence and shot past the visiting keeper, only for the upright to deny her a precious goal.

Soon after resumption, Jane was back in the thick of things – following a defensive blunder from Equatorial Guinea but she hurried her shot and it went narrowly wide.

In the 62nd minute South Africa was denied what looked like a clear penalty when Mollo was hacked in the box after she had beaten her marker, but the referee waved play on.

What followed was perhaps the biggest miss of the day – another cross from Mollo which was left by Jane for Jermaine Seoposenwe who fired her shot over the bar.

And that’s that how it ended at Makhulong Stadium.

Photo 1 caption: SASOL Banyana Banyana striker Jermaine Seoposenwe (pictured in an earlier match against Gabon in May) couldn’t sink a golden opportunity to take SA into the lead in their opening home leg Olympic qualifier against Equatorial Guinea in Johannesburg on Saturday, 3 October, 2015. The winner of the away return leg will qualify for Rio 2016 Photo: sasolinsport.co.za