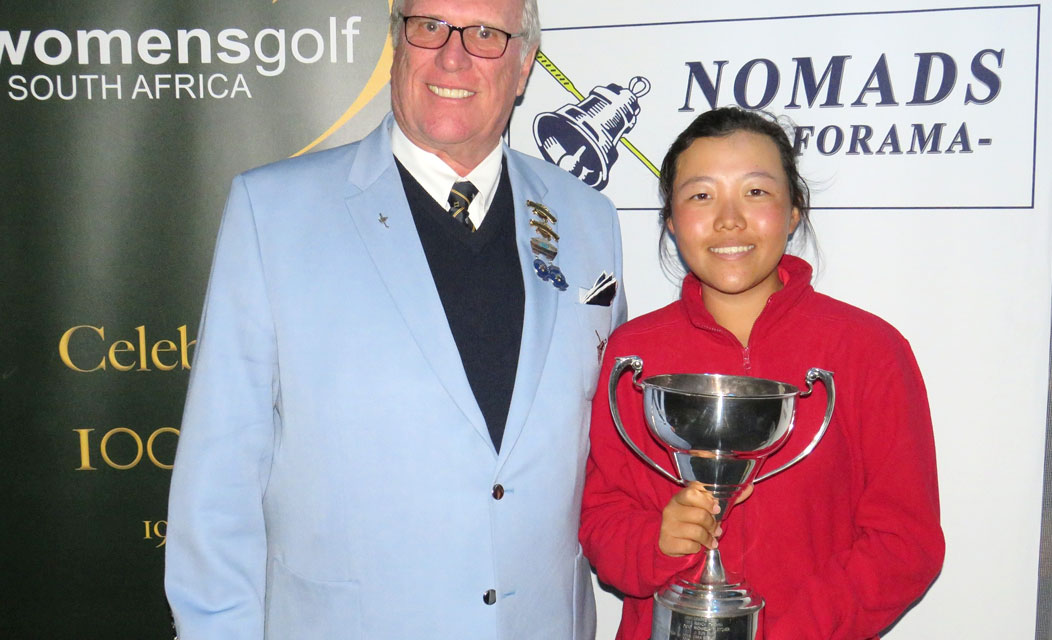 Gauteng teenager Woo-Ju Son put an exclamation mark behind her rising star status when she strolled to a seven stroke victory in the Nomads SA Girls Championship in Orkney on Tuesday.

Exactly 12 months since she lifted the Under-16 title, the country’s top ranked junior came full circle at Orkney Golf Club.

Going in search of her seventh victory this season, the petite 16-year-old West Rand junior opened with a one-over-par 73 to share the first round lead with Chante van Zyl from Free State and Western Province’s Kaylah Williams.

Son opened up a three shot lead over Jenefer Haw from Ekurhuleni with a second round 70 and closed with a final round 72 to triumph in wire-to-wire style. Son’s one-under-par 215 winning total was the lowest recorded since Connie Chen won the title with an aggregate score of 209 in 2010 and she was the only player to finish below par this year.

“I’m so, so pleased to have won,” gushed the country’s number one ranked junior. “I’ve been coming to Orkney since I started playing the junior circuit and it’s always been a goal to win the Nomads SA Girls.

“I came close in 2015, just missing out on the play-off and after I won the Under-16 title last year, it was one of my goals to try and win it this year. The two Nomads events – the SA Girls and SA Girls Rose Bowl – are the two biggest junior titles we play for. I am so glad that I’ve ticked this box. My next goal will be to win the double like Ashleigh Simon at next year’s Rose Bowl.”

Son offset three early bogeys with trio of birdies around the turn in the first round, but a late drop at 16 cost her the outright lead. She managed to cancel four bogeys in the second round and an eagle at the par five 17th pushed her well clear of the chasing pack.

She got off to a bogey start in the final round, but it didn’t take her long to recover.

“I pushed my tee shot right into the trees and when I punched out, my ball hit the thinnest tree on the course and bounced back into the trees,” said Son. “My third shot over the trees finished just short of the green and I chipped and putted for bogey.

“I sunk a 15-footer for birdie at six and hoped to birdie the par five (10), but I duffed my third and had to putt for par, but I holed a 10-footer for birdie at 11 to get to one under. I never pay attention to the leaderboard, so I had no idea by how much I was leading. I played with Kajal (Mistry) and only really watched her. Unfortunately she was battling with the putter, otherwise I am sure she would have piled on the pressure.”

“My tee shot at 15 landed in a divot, but I move it forward, only to find the ball in another divot in front of the green,” she said. “I chipped it up but my par-putt horse-shoed out. At 16, I hit a grip-down hybrid left of the green and two-putted after chipping to eight feet.

“At 18, I hit a good drive and a pitching wedge to three feet and boxed the birdie putt. I really wanted to finish on a high note after the two bogeys, and I was so pleased when I made it.”

Son leaves for the United States on Wednesday and the victory has given her an extra boost of confidence ahead of the IMG Junior World Championship.

“I worried how I would perform, because I’ve had trouble with a right wrist injury and lower back pain, but I managed it well this week,” she said “I’ll see the physiotherapist before I leave, but I believe my game is in good enough shape to challenge at Torrey Pines.

“Unfortunately I will have to miss the Sanlam SA Women’s Amateur Match Play Championship, but there is always next year. I will definitely follow the scoring on the web to see if anyone can stop Kajal from winning the double.”

Despite her putting woes, the country’s top ranked senior Mistry closed with a final round 74 to tie for second on 222 with fellow Gauteng golfer Chiara Contomathios, who racked up five birdies on her way to a three-under-par 69.

The stage is set for the finals of the SA Amateur Championships, with three mouth-watering 36-hole matches to look forward to that will determine the country’s champions of the year at Royal...

Top seed Megan Streicher looks to be the player to beat as she marched on to the quarter-finals of the South African Amateur Championships at Royal Johannesburg & Kensington Golf Club on...

Swellendam’s Megan Streicher rode a red-hot putter to shoot the day’s low round of 67 on the West Course and rally from four shots back overnight to win the South African Women’s Stroke Play...