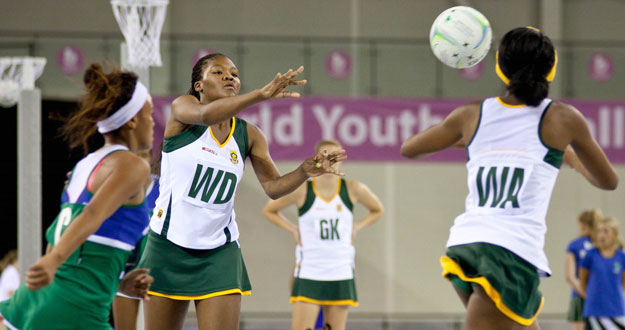 Despite putting up a good fight, Namibia was no match for the SPAR Baby Proteas on Monday evening, going down 71-27 to the powerful South African outfit who are yet to lose a match in the World Youth Netball Championships in Glasgow, Scotland.

South Africa were the first to score off a Namibian centre, and continued in this manner for majority of the first quarter. Four goals were scored in under two minutes, and Namibia could barely get their hands on the ball. The SPAR Baby Proteas appeared confident on court and played a lot of short sharp passes, moving the ball quickly into their goal circle.

Namibia on the other hand appeared shell shocked, and were making a number of errors, often throwing past their own players with long, high passes. By the end of the first quarter Namibia had only managed to score four goals to South Africa’s 28.

The second quarter saw much better netball being played by the Namibians. They increased their score by a further eight goals to South Africa’s five.

Whilst their play was more concentrated, it was clear to see that they were leaving many an open space for the South African team to play into.

In the second half of the match both teams upped their game, and the South Africa used their height advantage once again, often stretching past their Namibian counterparts.

Although getting the ball into the goal circle more often, the Namibians often took two attempts to sink a ball, slowing down their options of scoring.

However, they did manage to sink more goals by the end of the third quarter, and trailed behind South Africa by 22 goals to 53. South Africa played into the gap, and ended the match 71-27.

Tuesday’s game poses the biggest threat to the girls in green and gold, as they take on world number two Australia.

Vice-Captain Rochelle Lawson says that her team is ready; “Every game is a learning curve, but we are ready for tomorrow. We have been analysing the team and working hard. The team is positive.”

Coach Badenhorst has a similar attitude; “Tomorrow is going to be a tough game. We are dedicated, motivated and are going in for the win.”