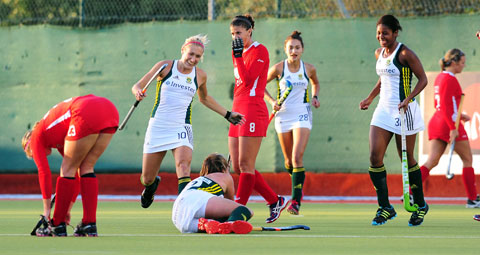 South Africa’s 2-1 half-time lead was overturned by the USA’s three goals in the second half to give the Americans a 4-2 victory at the Champions Challenge women’s hockey tournament in Dublin Sunday night.

Katie O’Donnell opened the scoring 14 minutes from half-time before Nicolene Terblanche equalised and Izelle Lategan took SA into the break 2-1 up. But Shannon Taylor’s field goal and penalty corner successes by O’Donnell and Torrie Albini gave the USA victory in a productive final quarter of an action-packed match played at frenetic pace.

In the second minute pacy Sulette Damons made ground on a turnover and fed Lategan, whose shot was saved by USA keeper Jackie Kintzer to set the tone for a high-octane clash.

The teams traded chances, keeping both keepers busy, but the Americans were not to be denied in the 21st minute when Lauren Pfeiffer made inroads down the right before laying off for O’Donnell to slap home.

Three minutes later a deep-lying Tarryn Bright’s visionary long ball to Shelley Russell was then fed to Illse Davids who swapped passes with Terblanche before the latter smashed a reverse-stick rocket from the edge of the strike zone into the net. Damons’ pass led to Lategan’s fine goal a minute from half-time and SA went into the changeover 2-1 up.

SA captain Lenise Marais was coolness personified with a crucial tackle as the USA strove for the equaliser but the Americans’ endeavour earned reward when Taylor made it 2-2 with 17 left on the clock.

SA went behind when O’Donnell finished off a neat PC variation for a 3-2 USA lead with 10 minutes left before Kelly Madsen’s deflection was parried by keeper Kintzer. Bright then came close from a PC, after which Mangisa made a fine double save before Damons was unlucky at the other end. Another PC gave the USA the killer blow when Albini smashed into the backboard with two minutes left (4-2).

South Africa’s 7-0 whitewash of the USA at London 2012 meant nothing in the context of the extensive changes both sides made for this tournament with the Africans missing seven of their Olympic 16 plus reserve Lauren Penny (shoulder) whose place was taken at the 11th hour by Celia Evans (injured for first two games in Dublin).

After Monday’s rest day, SA face Scotland at 4.30 pm (SA time) Tuesday in their final pool game. Thursday is quarter-finals day for the eight tournament teams, with sides finishing third and fourth in the respective pools getting another crack at a place Saturday’s semi-finals.

The South African Women’s Ice Hockey team claimed gold in Division III at the recent World Championships in Bulgaria on Tuesday, returning to Division II for the first time since 2013. South...

The sixth and final test of the SPAR Indoor Series between South Africa and Ireland was played on Tuesday night, 10 December 2019, at the Bellville Velodrome. The two teams who have fought out...