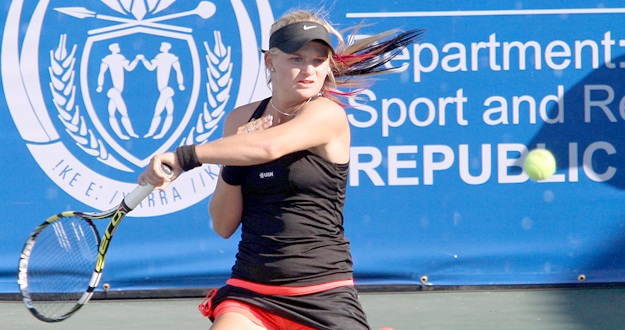 The $50,000 Soweto Tennis Open got off to a good start for the South African players when Chanel Simmonds, Madrie le Roux and Natasha Fourouclas all won through to the second round.

Unfortunately for SA wild cards Ilze Hattingh and Zanmarie Pienaar, it was not theirs to progress through the opening day of the 2013 Soweto Open, at the Arthur Ashe Complex in Jabavu, Soweto.

In Hattingh there was much anticipation when the top SA junior and reigning African Junior Champ was drawn against SA no. two Simmonds in their opening encounter, but the fifth seed dominated and won 6-0 6-2 in a quick 49 minutes.

But the experience of Simmonds was clear and showed through her dominance over Hattingh. “Ilze has done well as a junior. I really didn’t know what to expect. I prepared physically and mentally well for the match. I knew although I had not lost a game after 8 games played, Ilze was going to lift it at some stage, so I had to make her play,” said Simmonds.

Besides Simmonds, the most impressive performance on the opening day was probably from Fourouclas. The Witbank 19-year old has been out of action injured for over the year, and Monday was the first match Fourouclas played on her return.

Fourouclas squandered five set points in the first set and eventualy lost the opening set against German Kim-Alice Grajdek but dominated in the second and third sets, eventually winning 6-7 (11) 6-2 6-0.

“That was one tight first set and although Kim-Alice won it, I knew I couldn’t give up,” said Fourouclas. The tie breaker lasted one hour and fifteen minutes and Fourouclas said that as the match continued she “made less mistakes, got more aggressive”.

Madrie le Roux opened procedures on centre court and after a sluggish and tentative start put out Fadzai Mawisire of Zimbabwe 7-5 6-1. Le Roux now meets seventh seed Samantha Murray of Great Britain in the second round.

Murray in her first round against compatriot Emily Webley-Smith won the opening set 6-1 when Webley-Smith through in the towel due to a reoccurring foot injury.

Wild-card entry Zanmarie Pienaar of South Africa battled to find any rhythm in her match against Teodora Mircic of Serbia, the Serb winning comfortably 6-0 6-2.

Other first round winners included Pamra Ozgen of Turkey and second-seed Israeli Julia Glushko, who missed the entry deadline before having to qualify. She sailed through two qualifying matches over the weekend to be seeded two in the main draw. In the first round on Monday Glushko had a second set scare before beating Melis Sezer of Turkey 6-2 6-7 (1) 6-2.

Entry to the tournament is free, and the remaining first round matches will be played on Tuesday from 10h00. Directions to the Arthur Ashe Complex are available on the website www.tennissa.co.za