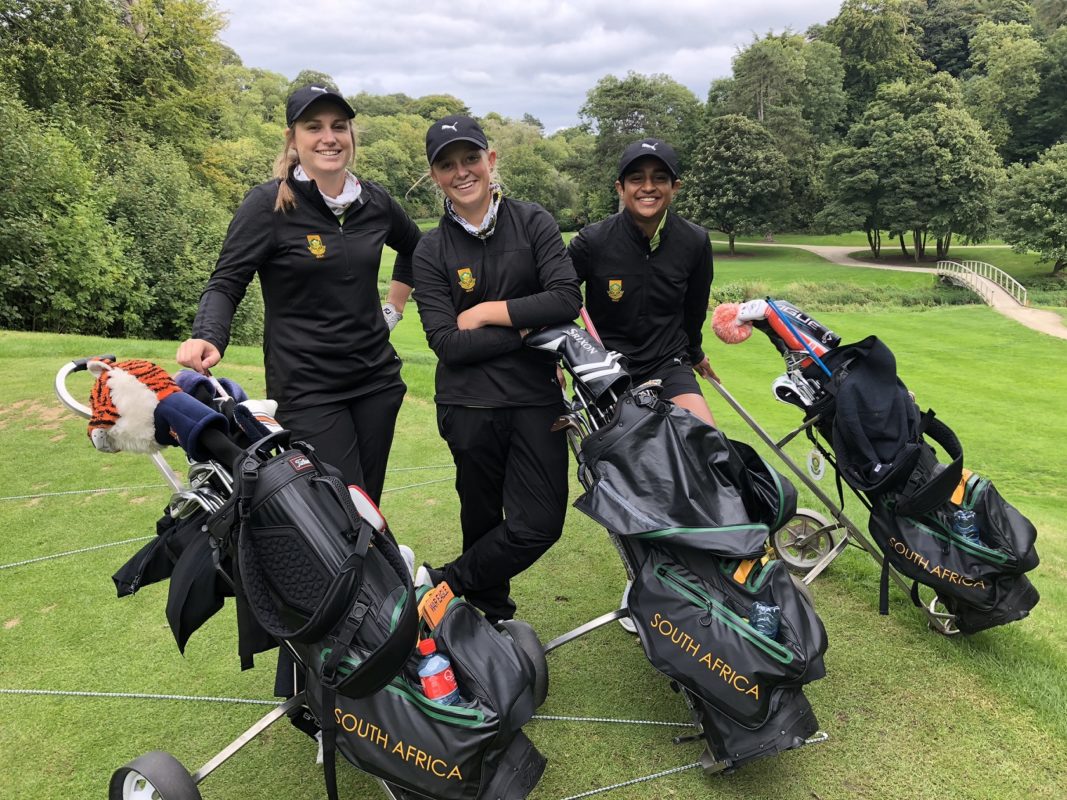 SA trio off to solid start at Espirito in Ireland

MAYNOOTH, Ireland (30 August 2018) – South African trio Kajal Mistry, Caitlyn Macnab and Kaleigh Telfer tied for 24th at the World Amateur Team Championship as Japan shot to the top of the first round leaderboard in Ireland on Wednesday.

A record total of 57 nations teed off at Carton House in County Kildare in the 28th edition of the prestigious Espirito Santo Trophy.

Yuka Yasuda posted a bogey-free seven-under-par 65 on the par-72 Montgomerie Course and teammates Yuna Nishimura and Yuri Yoshida both shot 71 to propel Japan to a two-stroke lead over the People’s Republic of China on a team total of eight-under 136.

The South African trio began their campaign on the par-73 O’Meara Course.

Telfer was out first and carded a two-over 75, which was matched by Macnab. Mistry returned a non-counting 79, giving South Africa an opening total of four-over 150.

“I made a solid start with two pars, but I couldn’t up-and-down from the bunker at three and made my first bogey,” said Bryanston golfer Telfer. “I stuck my second shot six feet from the hole after a great drive at the fifth and holed the birdie putt to get back to level, but I dropped another shot at seven to turn one over.”

The Auburn University student was two over after a bogey start to the back nine.

“I hit a wedge from 98 yards out to 10 foot and boxed the birdie putt at 15, but let one more slip at the closing hole,” said Telfer. “I putted really well throughout the round and made a lot of par saves, and hopefully I can put a good round together at the Montgomerie Course today to help us inch closer to the leaders.”

Macnab had birdies at three, four and nine to turn one-under. The 16-year-old Ekurhuleni junior also bogeyed the par four 10th and had a double at the par five 15th but got one shot back on the field with a birdie finish.

Mistry traded birdies at two, six and eight, but the 17-year-old from Randpark gave nine shots back to the field. “I had three good birdies and a lot of really good par-saves, but made too many soft bogeys,” said Mistry.

“It was very windy, cold and wet during the practice rounds, but the weather was sunny in round and we were only playing into a two-and-a-half club wind, so I was a little disappointed with my score.

“I made a nice start with the birdie at the second, where I hit a 6-iron to six feet and holed the birdie putt. I hit a lob-wedge to tap-in distance at six, and at the eighth, I hit 8-iron to 10 foot and made the putt for birdie.

“My putting was inconsistent, though, because I three-putted three times. And I failed to up-and-down from bunkers twice. I drove it well and I played nicely, though, so today I’m just going to try really hard to limit the mistakes.”

The People’s Republic of China started at the O’Meara Course and was led by 16-year-old Mohan Du, who carded a six-under-par 67. Her teammate, 15-year-old Ruoning Yin, added an even-par 73 for a six-under team total.

Defending champion Republic of Korea, Germany and Austria share third at four-under, while the host nation tied for sixth on three-under with Australia.

PHOTO – Kaleigh Telfer, Caitlyn Macnab and Kajal Mistry tied for 24th in the first round of the Espirito Santo Trophy at the 2018 World Amateur Team Championships in Ireland; credit GolfRSA.