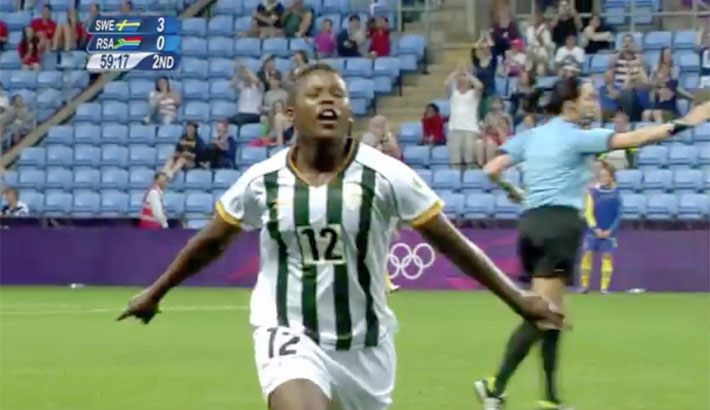 Top SA women in sport have lauded Portia Modise following news of her international retirement earlier in the day.

“Portia Modise… What a legend! A player that will always be remembered in South African football,” said the Banyana Banyana captain. “I’m so honoured to have played alongside her. She will be missed in camp and on the field! I wish her well…”

“I have known Portia since the age of 14. It is sad to see her retire but I can only applaud what she has achieved. A true legend of the game. All the best, my friend!”

“What an exceptional player, one of a kind,” said former team-mate, team manager and and SABC TV soccer analyst, Lydia Monyepao, who only had gracious words for Modise. “It was a real pleasure playing with Portia at Soweto Ladies, and Banyana Banyana, back in the days…

“We will surely miss her mesmerising skills on the football pitch, and her energy at training. Farewell Bashin, continue inspiring the young and upcoming players!”

Top SA runner Nolene Conrad pointed out the value of Modise’s contribution to SA women in sport: “I would just like to thank Portia for inspiring young female athletes by making the best of her talents, and for  being a positive role model to ALL woman not just woman in sport.”

And former SPAR Proteas netball captain Zanele Mdodana had only praise for the SA football legend: “To my sister, Portia Modise, you have stood head and shoulders above the rest, led by example, and flown the women in sport flag very high with pride.

“Well done on a great journey! You leave a fruitful legacy! Enjoy the rest,” said Mdodana.

Earlier in the day, Modise has announced her retirement from international football at SAFA House in Johannesburg on Tuesday, 19 May, bringing to a close one of South Africa’s most accomplished football careers.

SAFA President Dr Jordaan lauded the longtime national football star, and welcomed her future contributions to the game. “Her new role will be to guide other players,” said Dr Jordaan.

Modise was also quick with a word of assurance: “I’m not lost to SA football,” said the goal-rich striker, before acknowledging SA’s sports journalists’ contribution to her rise to fame. “I want to thank the media for giving greater exposure to women football.

But Modise didn’t waste much time on the past, her coaching career already well established lending credence to future ambitions. “My wish among other things is to create ten more Portia Modise’s within our national teams.”

An interesting measure of the impact of her announcement, Modise was the top-trender on Twitter in South Africa at lunch time on Tuesday, as news of her retirement spread like wildfire.

Photo 1 caption: “My wish among other things is to create ten more Portia Modise’s within our national teams,” the words of Banyana Banyana legend Portia Modise, who brought a close to an illustrious career spanning 120 appearances and boasting 101 goals in national colours. In this photo, Modise is seen striking the ball for one of her most well-documented goals, the astounding mid-field strike against Sweden at the London 2012 Olympic Games. Photo: Screengrab of the broadcast on YouTube