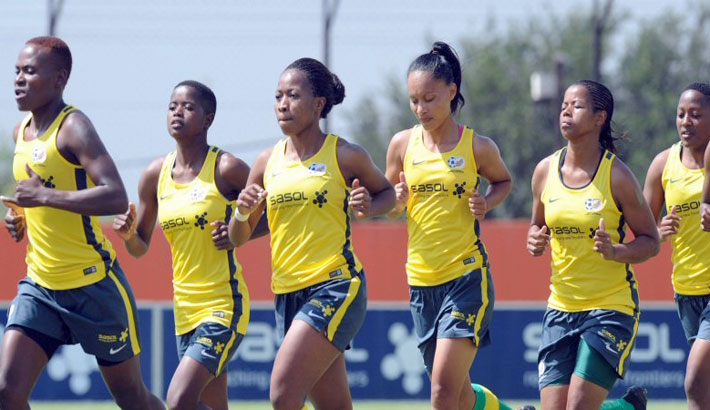 Banyana Banyana coach Vera Pauw has selected a strong squad for the first leg of the Rio Olympic qualifiers against Gabon next Saturday at Stade Augustin Monedan in Libreville, Gabon, with the return match will be played a week later at the Dobsonville Stadium.

There are few changes in the squad named to take on The Panthers of Gabon.

Veteran striker, Portia Modise and goalkeeper Roxanne Barker have both been left out of the squad but youngsters Thembi Kgatlana who plays for the University of the Western Cape and Rhoda Mulaudzi who plays for Mamelodi Sundowns Ladies in the Sasol league Gauteng stream, have been included in the team that will be travelling to Libreville.

“Unfortunately, Portia (Modise) is out with a hamstring injury and we will have to do without her but other players will have to raise their hands. As for Roxanne, since this match does not fall on a FIFA Calendar date, her team refused to release her,” said Pauw.

Spring Home Sweepers defender, Nomathemba Ntsibande makes a welcome return into the team after missing out on the African Women’s Championship due to injury she suffered on the eve of the team’s departure to Namibia, in October last year.

“Nomathemba is back and determined to leave a mark. In fact, through her sterling performances, she literally selected herself,” added Pauw.

The Sasol-sponsored Banyana Banyana mentor is happy that she is playing the first leg away.

“We don’t know much about our opponents, we have searched for information all over but had no joy, so this is like the Comoros game where we went into the match with little information on who we were facing. We will prepare for everything whether it is a weak or strong team, however difficult, but the players are used to it,” said Pauw.

“It is also to our advantage that the first leg is away, and we will try and win the game away so that we finish the job at home.”

All players are expected to report for camp this Sunday, 17 May 2015. The team will start with preparations for the away leg on Monday, 18 May 2015 at AW Muller Stadium, University of Johannesburg.

The team departs for Libreville, Gabon on Wednesday, 20 May 2015.

Photo 1 caption: SASOL-sponsored Banyana Banyana in camp ahead of departing for Libreville to take on the Panthers, in the first leg of the home-and-away Olympic qualifier against Gabon. Photo: SAFA website