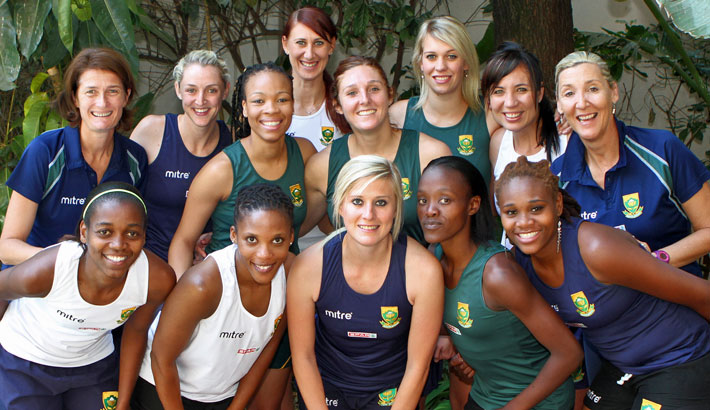 SPAR Proteas stalwart, Zanele Mdodana, has announced her retirement from international netball after dedicating over a decade, playing at the highest level.

Mdodana, who is currently commentating for SuperSport on the KZN Diamond Challenge, told gsport: “It’s been 11 great years playing for the SPAR Proteas Team.

“I have no regrets whatsoever. I have served my sport, my team, emptied myself and gave all I had… It has been a memorable journey, one I will treasure forever.”

Mdodana was the skipper of the first SPAR Proteas netball team to clinch the Diamond League title, against continental arch-rivals Malawi in 2012.

“The gift to play netball is from God and as the word says, Your gift will make room for you. Netball has indeed opened many doors for me. I thank every coach who laid a hand on me and spoke my successful and blessed career into being.

“I thank every team mate who made me look good on the court, I thank NSA for allowing me to be the best of me I can be on the netball court, every sponsor who supports and is still to support netball, and to SPAR for being the consistent pillar of strength to netball in SA.”

The proud Eastern Cape resident exits the international stage as the most senior player – boasting 82 caps under her belt, and says that having captained a winning team, attained great victories against top teams, and having had a good Commonwealth Games last year, she thinks it’s fitting to hang up her boots.

“Netball moulded me into the woman I am today. I’ve done it all. I’m content and have nothing else to prove to anyone else, not even to myself. I’ll miss my sisters in the team, and I’ll miss the playing, but I am exactly where I’m supposed to be, doing what I’m supposed to be doing.”

Mdodana, who was featured in the Mail and Guardian’s list of 200 Young South Africans in 2014, says she will invest her time and energy into coaching. As assistant coach of the Nelson Mandela Metropolitan University, she is committed to growing her vision for young netballers.

The mother of one says she is looking forward to enjoying more time with her son, growing her commentary career with SuperSport, and embarking on a triathlon amateur career.

“Thank you to my son, Zukolwakhe for his unconditional love and support, my parents for always encouraging me, and God who blessed me with a talent to play sport and blessed me with the strong character to know that talent alone is not enough and that consistent hard work is key…

“I thank my God for calling me, also choosing me to be among the very few to have worn the Green and Gold, and the Protea on my chest.

“This is by far the greatest honour of all. I wish my team, the SPAR Proteas all the best at the up coming World Cup in Sydney, Australia.”

Photo 1 caption: Former national netball skipper Zanele Mdodana (third from right, top row) has decided to retire from international action, and to focus on blooding the next generation of netball stars. In this photo, hometown hero Zanele Mdodana and the SPAR Proteas team pose ahead of the Tri-nations also featuring England and Trinidad and Tobago in Port Elizabeth, on 3 June, 2012. Photo: Michael Sheehan

Photo 2 caption: An accomplished defensive play specialist, Mdodana appeared for South African in national netball colours no less than 82 times in a career spanning a decade of representing her country at the highest level. Photo: Supplied

Photo 4 caption: With a wonderful ability to balance being sporty and stylish while remaining true to herself, Zanele Mdodana has risen to become a red carpet sensation on the women’s sports scene. Mdodana is pictured receiving the 2014 gsport Style Star Award from Estee Lauder’s Lulu Ndevu, at the Wanderers Club in Illovo, Johannesburg, on 24 November, 2014. Photo: Rebecca Hearfield

Photo 5 caption: For every sportswoman the time comes to hand over to the next generation. Zanele Mdodana’s future career ambitions will receive strong support from all who had the benefit of knowing this powerful defender in her best playing days. Photo: Supplied