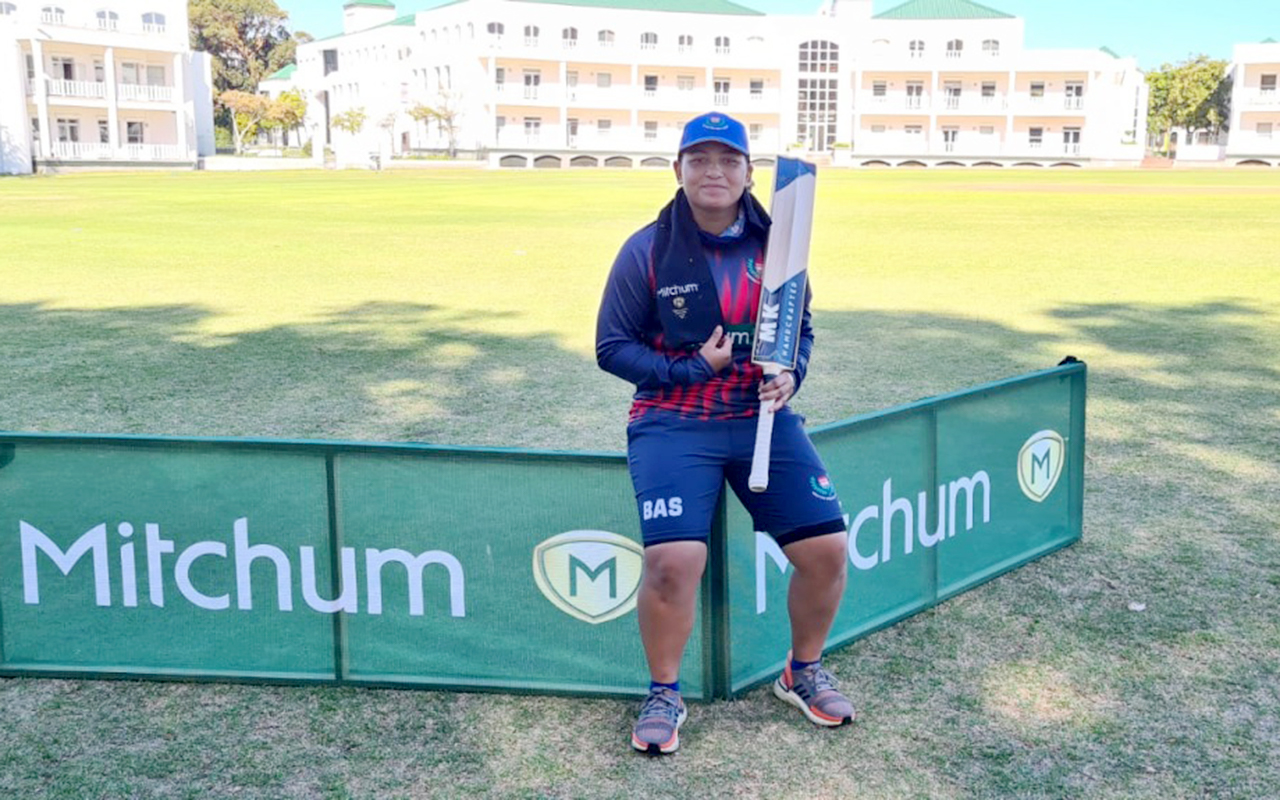 Promising South African cricketer, Saarah Smith, is motivated to build on her recent outstanding CSA Women’s Provincial 1-Day League performances as she aims to make a return to the Momentum Proteas squad.

Smith, who was the only batter in Pool A of the domestic league to pass the 100-run mark in terms of total runs scored, contributed to Western Province’s unbeaten run in the tournament.

Over the years, Smith has made several appearances in the SA Emerging and Proteas squads, however, her progress was derailed due to injuries – including a recurring back injury.

With support from her family and close friends, the 22-year-old has been able to mentally deal with her challenges, and has bounced back to take control of her blossoming career.

Speaking with Celine Abrahams, Smith reveals lessons learnt in sport and cricketers she draws inspiration from.

Saarah, it is a pleasure having this opportunity to chat to you! How are things your side?

I am all good, no complaints my side. It is the month of Ramadaan so I couldn’t be in a better space. Thank you so much for having this chat with me, I am honoured to have received this opportunity to chat with gsport4girls.

In March, you were the only batter in Pool A of the CSA Women’s Provincial 1-Day League to pass the 100-run mark in terms of total runs scored (123 runs in just 3 games). What was it like achieving this feat?

“Mentally, I was in a very good space and I knew from the first match that this was going to be a good few days of cricket for myself and my team.” – Western Province cricketer, Saarah Smith

It was probably one of my favourite “tours” I have had in a very long time. Mentally, I was in a very good space and I knew from the first match that this was going to be a good few days of cricket for myself and my team. Achieving these stats felt good but I know that I could’ve achieved more in all three matches, every time that I went out I was very disappointed in myself because I knew I could’ve done better. But I guess these things happen and I just have to work harder and little bit smarter next time around.

How has your performances motivated you for the future?

It has definitely given me a boost to work even harder because those performances were definitely not my best which makes things even more exciting for the future.

Over the years, you have made appearances in the SA Emerging and Momentum Proteas squads, however your progress was challenged along the way with injuries. Mentally, how did you deal with those delays?

It was definitely one of the biggest challenges I have ever faced in my cricket career thus far. Ever since I broke my finger at the 2018 World Cup I developed so many more injuries out of the blue. Every time I was recovering from an injury and starting to get fit again another injury would flare up and it became extremely frustrating and even depressing at one point. But I had to push through it and I had to believe that everything happens for a reason and believe that the Almighty has a plan for me so I just have to be patient and not give up on my dreams because I am only 22 years old and will probably face more obstacles along the way.

“I learnt and grew so much as cricketer and as a person.” – Smith chats about her transition in cricket.

2018 was a rollercoaster (year) and it went by so quickly, but it was a year that I am very grateful for. From SA Emerging to National Academy and to eventually Momentum Proteas, I learnt and grew so much as cricketer and as a person. I received a taste of every level of cricket in our pipeline in one year and it was one of the best things I experienced. And I hope there will be more to come.

Who has been your support system that has kept you grounded and focused on achieving your career goals?

My family is definitely on top of the list, especially my parents who have been pushing me to get the best out of me. Saadiek Davids who is my private coach and most importantly my mentor has been my rock through my entire cricket career. Kevin Heuvel from MK Handcrafted is a very good friend of mine and we have had many chats that have kept me to consistently in a good space. And last but not least my teammates, they know who they are, I couldn’t have done these performances without them (literally).

What are some of the lessons you have taken away from being in sport?

There are definitely many lessons that I have learnt and still learning but the biggest lessons was patience and self-confidence. Every lesson that I learn I take it into life because life is the biggest challenge anyone can face. To believe in yourself and to have patience in what the Almighty has planned is one of the best lessons you’ll receive.

Which cricketers inspire you and why?

AB de Villiers and Virat Kholi are two cricketers where I admire their confidence and fearlessness when they go into bat. Every shot is played with ease and it is amazing to watch. Hashim Amla has always been one of my idols, and I wish I could have met him. Amla was a cricketer I looked up to because of who he was, he was a Muslim first and cricketer second, and I admire that so much. The fact that he is a brilliant cricketer is just the cherry on top.

What are your hopes for the development of women’s cricket in the country in future?

I think definitely more super league cricket and for the pipeline to be stronger, and for us women to get paid as well as what men get paid.

Where would you like to see your career in the next five years?

I would like to see myself as an international cricket player, if not for the Proteas then definitely overseas. I would love to play for my country again and travel the world.