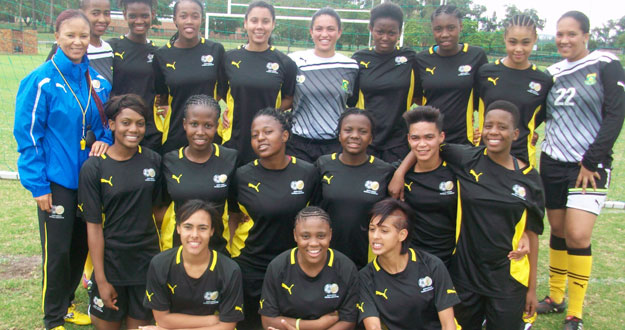 Sheryl Botes, Head Coach of the SAFA Girls Soccer Academy, has reason to smile, after the Academy produced 18 players for SAFA’s women’s teams in 2012.

The Academy, based in Hatfield, Pretoria, is funded by SAFA, and hosts 25 of the best young players selected from affiliated provinces.

Among her players that earned national colours, Robyn Moodaly, Nomvula Kgoale and Katlego Moletsane made the biggest step up when they were selected to play for Banyana Banyana this year.

The strength of rising talent was also evident with the impressive performances from the South African Under-20 team, Basetsana, which claimed the bronze medal at the recent Zone VI Games in Lusaka, Zambia.

“To be honest we deserved a gold medal, instead of bronze,” said Botes ruefully. “The round-robin system used by COSAFA was flawed, and disadvantaged our team. During the group stages we beat both teams, namely Zambia and Zimbabwe convincingly, and yet they ended up in the final.

“I am still very much proud of my team’s performance,” said Botes, who is also Head Coach of the SA U20 women’s team.

“The standard (this year) was very good, but unfortunately only four countries participated, namely South Africa, Namibia, Zimbabwe and Zambia. We need more countries to participate in the next Zone Six tournament 2014, to make it more competitive.”

2013 will be a year of rebuilding year for Basetsana, who will be losing 10 players to Banyana. This process will start as early as January, with the FIFA U20 Women’s World Cup Qualifiers due to start in October 2013. The showpiece event itself takes place in 2014.

Botes said some of the highlights of 2012 was seeing new kid on the block Robyn Moodaly represent Banyana Banyana in London alongside former SAFA Girls Soccer Academy players Janine van Wyk, Nompumelelo Nyandeni, Nothando Vilakazi, Kylie-Ann Louw and Mary Ntsweng, all of whom Botes had the privilege of coaching for a few years.

Botes notes their the attributes that makes them stand out from the pack, saying that “All of them have very good match temperament, and are very aggressive in their play. Most of all, they very confident and positive.”

“They must be very positive in their approach,” says Botes. “Keep on working hard and strive to be the best in the country. Talent alone is not enough, we need players with good character in their play and that are mentally strong.”

Botes is hoping that 2013 bring lots of international friendlies to prepare Basetsana, and this will serve her aim well, as she says; “Training alone is not enough. I want Basetsana to become the best in Africa, and qualify for the World Cup in 2014?”