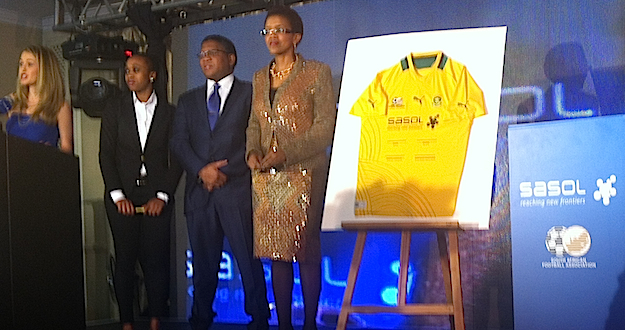 SASOL and the South African Football Association (SAFA) have concluded a deal that will see SASOL stay on board as the headline sponsor of the senior national women’s football team (Banyana Banyana), and the SASOL League, which is the country’s premium women’s football league.

Unveiled at a stylish launch at Summer Place in Illovo, Johannesburg, on Monday evening, 24 June 2013, graced by the Minister of Sports and Recreation, Fikile Mbalula, the deal sees the two companies further cementing their partnership and carrying on the work that they started four years ago when SASOL came on board as the sponsor for Banyana Banyana.

SASOL and football have a history dating back to the days of Amaglug-glug (South Africa’s under 23 national soccer team), and the company has been involved in the development of local football ever since.

In the last four years SASOL has played a leading role in the development of women’s football and has also been a key enabler of women empowerment through football, which is in line with the company’s position of supporting the South African campaign for gender equity.

During the past four years, SASOL’s involvement in women’s football has seen the organisation making great contributions towards nation building and women empowerment.

“We are very proud that SASOL, in partnership with SAFA, is making a significant impact on developing women in sport from the ground up,” said Nolitha Fakude, Executive Director at SASOL.

“Our players have done SASOL and South Africa proud as they have continued to improve and showcase their talent on the global sporting stage,” said Fakude.

The SASOL League has 144 teams nationwide and with each province having 16 teams, its impact on the lives of the players can never be disputed. The league has afforded many players the opportunity to further their studies at top tertiary institutions whilst still playing football.

The SASOL League has brought communities together through sport and the support of women’s football has opened doors to new opportunities for women football players.

“The SASOL sponsorship has played an integral role in what we have been trying to achieve with women’s football,” said SAFA President, Kirsten Nematandani. “It has allowed our ladies to participate in international competitions and that has helped develop the national team.

“We are excited by the renewal of the sponsorship as this allows us to extend the development opportunities to more female footballers and to continue our work in women’s football.

“Our challenge to other corporate companies is to emulate the Nation Building spirit of SASOL,” said Nematandani.

The new deal will see SASOL stay on as the sponsor of the senior national women’s team and of the SASOL women league until 2017.