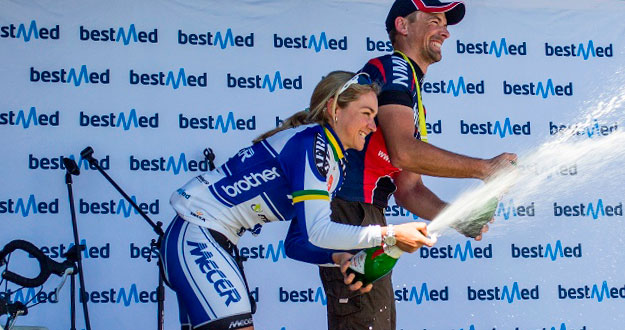 The Makro Bestmed Cycle Tour was a huge success this year with more that 1600 riders participating in the road race and 405 in the MTB race in Port Elizabeth on Sunday, 8 September, 2013.

The ladies started the 90km race in the open licensed category. The first 20kms of the race were very flat and although many riders tried to break away, the attacks were quickly chased down and neutralized.

Anriette Schoeman (Mecer Africa Silks), and Allison Hertel and Monique Gerber – both from the NMMU team, had to hang on for dear life in the midst of all the attacks going down.

The leading bunch broke up into smaller groups against the Cows Corner Climb, with Schoeman left as the only lady in the leading bunch. A series of attacks was launched again at Altona. In the chaos wheels touched causing ten riders, including Jevandre Pauls to go down.

Schoeman just missed the fall but lost precious time trying to get through the downed riders. Schoeman and one of riders tried to get back to the leading group of ten riders but were unable to close the gap, now trapped between the leading and chasing bunch.

With 70km to go the chasing bunch with Hertel and Gerber caught Schoeman at the Rocklands turnoff, but were’nt able to keep Schoeman from taking both the Queen of the Mountain prizes.

On the last climb, 6km from the finish, Gerber lost contact with Schoeman and Hertel, and the two stayed away to the finish where Schoeman outsprinted Hertel to take the first place in 2 hours, 20 minutes and 18 seconds, with Hertel second in the same time and Gerber third in 02.21.30.