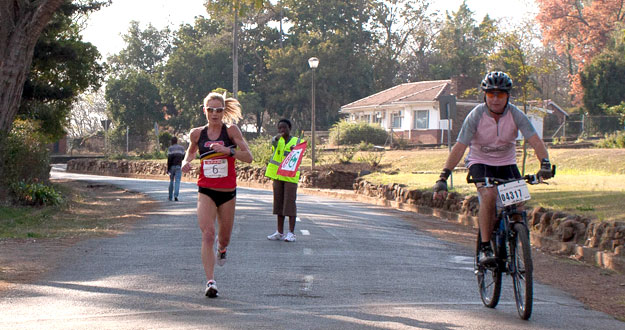 Jenna Challenor won the SPAR Women’s 10km race at the Oval in Pietermaritzburg in a time of 35.24 on Sunday, annihilated the field with a massive lead of 3.35.

From 300m into the race Challenor looked to have a commanding position with the rest of the 3,200 runners filing in behind her. “It was a windy, hot and dry race out on the road,” commented Challenor after the race.

“The route was challenging, standing on the start line and we were all ready eyeing out the first hill. It was a testing up and down race; the hills of Maritzburg are tough!”

Continuing, the leading lady revealed, “This is my third big race on the trot, last weekend in Pretoria I gave it my all coming in fifth in the SPAR race. I felt strong but am fightening off the flu and have a niggling hamstring.”

Concluding, Challenor said, “There is a chance that I will be running in the SA Cross Country Champs in Potchefstroom next weekend but after the run today, my body is tired! Running three major races I wouldn’t mind a break.”

Pocket dynamite, Poppy Mlambo lost her title to the in-form Challenor, finishing second, “The race was ok, the conditions were hot and dry. I have been training in Durban for the last month, so have adjusted to the humidity but the berg wind was unforgiving.”

Mlambo has been concentrating on the longer distances this year, having competed in six marathons, she is preparing for the Soweto Marathon taking place in November.

In the 5km race, two seconds separated the first two ladies, young Fezeka Mchunu snatched victory from the defending champion Natascha Hartmann with a time of 20:43 on the clock, Hartmann finishing her run in 20:45.

The Race Director, Brad Glasspoole said, “We have had complimentary feedback about the new route; the reality is we will never have a fast and flat route in Pietermaritzburg, but we have tried to make it as easy as possible for the ladies.”

“Congratulations to all the athletes that turned out today. The enthusiasm shown at the race with so many bright and colourful people making an effort to dress up, fabulous to see! We had a very good turnout despite the blustery berg wind and dry and warm conditions. Thank you Pietermaritzburg for supporting us and helping us make out event so successful,” said Rob Philipson, MD of SPAR KZN.