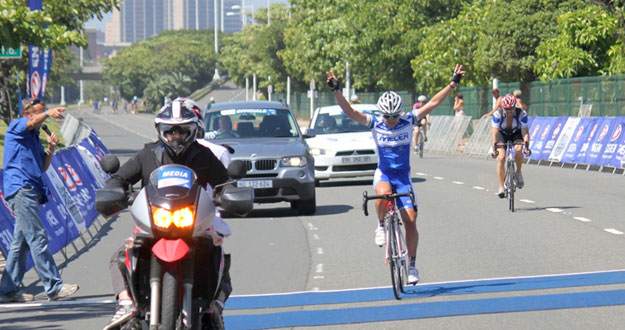 Anriette Schoeman (Mecer Africa Silks) showed true form by winning the Engen Dynamic Cycle Challenges 2012 Series this weekend. This was a back to back win for Schoeman as she also won the first leg of the series in Wellington.

The ladies had their own separate start and it was a beautiful sight with a huge contingent of ladies starting the 93km race which took them through the streets of Durban past several Engen service stations.

Awesome traffic control by 250 traffic officers and even more road marshals saw the riders safely through the city. Isabel Moolman was the first rider to lift the pace, stretching the bunch with the result that a few ladies lost contact with the bunch.

Schoeman upped the pace at the foot of a 4km climb, 14km into the race. Cashandra Slingerland (Mecer Ferrochrome) and Charlotte van der Merwe (MTN Qhubeka) also moved to the front of the bunch and further increased the pace.

At this stage only the Mr. Price Ladies could manage to stay with the leading group of who were opening a gap on the bunch. Another surge by Schoeman caused Moolman to lose contact with Schoeman, Slingerland and Van der Merwe. With 73km to go it was clear that the break was away as the gap steadily became bigger as the front three worked closely together.