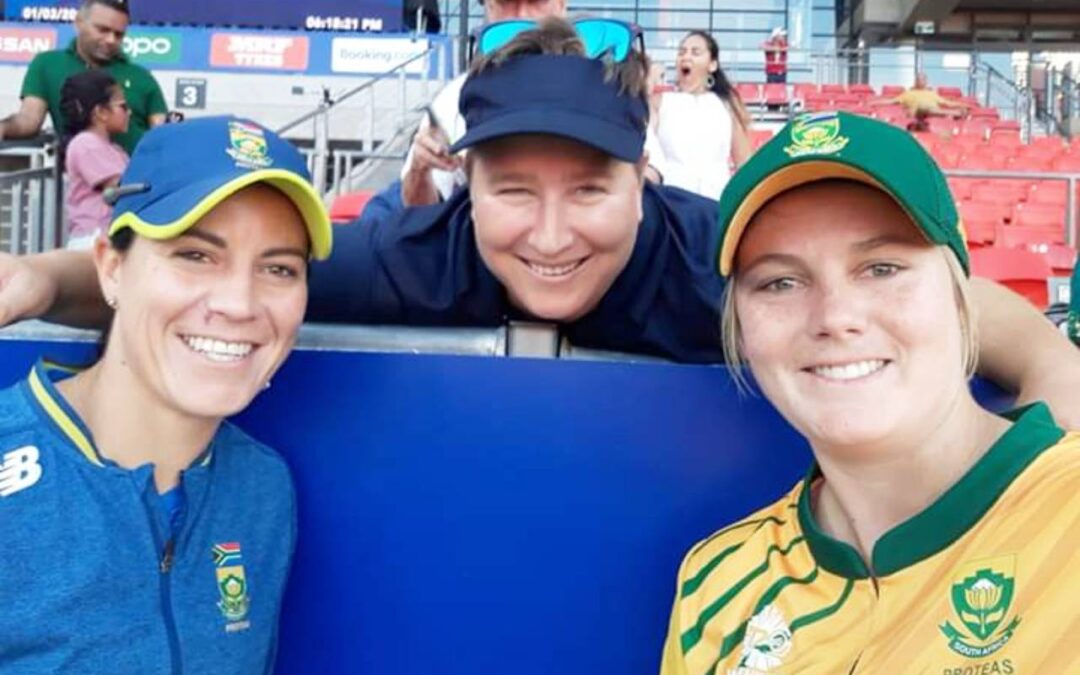 For 26 years Shannon Landman-Kriel has dedicated her life to women’s cricket in South Africa and hopes to continue to champion the development of the sport, thus ensuring the ball and the bat reach more prospective players.

Landman-Kriel has been an advocate for women’s cricket since starting out at the age of 17 when she joined her High School’s boys’ team in order to take part in the game, turning on its head the misconception that the sport was only for boys.

1994 came with South Africa’s new dawn of democracy and to Shannon’s delight, the year also came with the first women’s cricket team. The following year, the wheels of change in the country saw a sprout of cricket clubs all over.

The 2018 gsport Supporter of the Year went on to play against some of the world’s best female cricket players during the early 2000’s and waited over 20 years to score her first century, finally coming in the 2018/2019 club season.

With her many hats in the game, she is currently serving as a member of the pipeline committee at Central Gauteng Lions Cricket as well as the Club Council, while also managing women’s cricket at the Wanderers Club. Landman-Kriel is also part of the main organisers of the Wanderers LadiesT10.

This invaluable experience and influence called for a chat with Celine Abrahams. Celine had the coveted task of picking her brain and of course, discussions about her dreams for women’s cricket in South Africa.

Shannon, it’s a pleasure speaking to you. Please tell us about when your love for cricket began?

I grew up in the era of Hansie Cronje, so I guess my love for the game started way back then.

What was your family’s reaction when you told them that you wanted to compete with the boys in cricket?

I was always a tomboy so my mother was not surprised that I wanted to play cricket, she knew how much I loved hockey so she felt it was probably less “rough” and she promptly went out and bought me my first cricket bat.

Tell us more about your journey and the role you played in bringing women’s cricket back to the country way back in the historic year of 1994.

It started when I was 17 which is some years ago (1994) when I was at school in Johannesburg at Queens High School.

There was no ‘cool’ sport offered for girls in the last term and I wasn’t particularly fond of tennis so a friend and I asked a teacher if we could play cricket with the boys.

We were granted permission but that didn’t last long as a boy in a rival school was injured by my friend (we saw him years later and he still had the dent in his forehead).

“Women’s cricket had not been played since the 70’s anywhere in South Africa, so I am proud to know that I was one of two girls to have brought it back.” – Former cricketer, Shannon Landman-Kriel

So in 1994, the first girl’s cricket team was formed and with the help of United Cricket Board (now named the Cricket South Africa) and Sir Conrad Hunte (West Indian player who was developing the game for the UCB with Ali Bacher) the league was formed.

Women’s cricket had not been played since the 70’s anywhere in South Africa, so I am proud to know that I was one of two girls to have brought it back.

And in 1995 the first provincial tournament was held for u/19 and senior women… and so that is how it all began.

Club cricket started all over South Africa the next year and since then women’s cricket has been around.

What were some of the challenges that you faced back then that still stand today?

Our challenge as women or girls back then and still in many male dominated circles is that we are seen to be weaker than our male counterparts or we don’t play an attractive or exciting brand of cricket, which is really not the case.

Many ladies’ clubs or provincial sides don’t have home fields or facilities that allow them to train consistently in the correct environment.

We need more female coaches coaching at a high level. There are so many male coaches from grassroots levels to the National set up for both men and women. It is about time that women coaches coach the men as well.

How much improvement has been made?

Back in the 90’s and early 2000’s the provincial and national players had to fund their own way to tournaments. National players had to raise between 30 to 40 thousand rand to wear the Proteas blazer on overseas tours. Now there are contracted players which allows the women to make a career out of playing cricket. We have female umpires at the highest level as well as coaches that can continue to have a career in cricket.

What do you think still needs to be done to uplift women’s cricket from grassroots to the national level?

What often happens at club and provincial level is teams play against the same opposition which in the long run doesn’t expose them to stronger competition or players that have a higher skill set.

“I would also like to see Cricket South Africa appoint women to purely run and drive women’s cricket forward, this worked very well in England and Australia.” Landman-Kriel yearns for the day where women manage the national women’s cricket team.

I would also like to see Cricket South Africa appoint women to purely run and drive women’s cricket forward, this worked very well in England and Australia. Every union is trying to grow women’s cricket, but it gets lost in the system. It isn’t always the case, but sponsors and funds are driven by the men’s set up, so their needs do often come first.

Which current South African cricketers has impressed you in their performances?

There are so many players from the 2019/2020 season, noticeably there was Laura Wolvaardt, but one of my stand outs was Suné Luus, when Dané (van Niekerk) got injured she took up the captaincy with such ease and tenacity. I feel like she was the unsung hero of the last season. Provincially, there has been some wonderful standouts like Tazmin Brits and Anneke Bosch from North West and Kirstie Daniel formally Thomson (ex-Proteas player) who has recently returned to playing cricket.

Any pearl(s) of wisdom from Shannon to our current players?

Never give up on your dream. If you train really hard, then one day your turn will come.

My prime example of this is Marizanne Kapp. I have watched her career with keen interest over the past fifteen years. She was initially picked as a non-travelling reserve for the Proteas and her determination and grit to become part of the national set-up on a permanent basis turned her into the best all-rounder in world cricket.

What are your biggest career highlights?

The other highlight was hosting the first Ladies T10 at the Wanderers club in 2018. Maddy Wolmarans-Botha and I worked for 11 months to put it together and when that first ball got bowled, I felt as if I had scored my first hundred.

Who are some of the best players that you played with and against during your time?

I was fortunate enough to play against the U21 England team in the early 2000’s who was at the time captained by Charlotte Edwards. I also had the privilege of spending time with Karen Smithies (first English captain to win the limited overs World Cup). I played with and against players like Linda Olivier, Kerri Laing, Daleen Terblanche, Kim Price, Denise Reid and Alta Kotze. I also played cricket with Francis Hall – Andrew Hall’s sister who represented the Proteas men’s team as well as Quinton de Kock’s sister, Dalean. I also played a season of club cricket with Melanie Jones (Australian cricketer) when she was here.

Who are some of the women in sport that inspire you?

Palesa “Deejay” Manaleng – she has such inner strength and exudes love and laughter in anything she does.

Of course, the Momentum Proteas inspire me every day to build the cricketing community so that they can one day have 89 000 people watching them at a stadium.

What are you currently involved in?

I am currently serving as a member of the pipeline committee at CGL as well as the Club Council. I manage women’s cricket at the Wanderers Club. I am also part of the main organisers of the Wanderers LadiesT10.

What are you still hoping to achieve in sport?

I would like to have every girl in SA have a place to go and play cricket.

When a young girl gets asked in South Africa who her cricket hero is or who she would like to play like, my wish is for her to say Laura, Ayabonga Khaka or Tumi Sekhukhune and not hear AB de Villiers or KG (Kagiso Rabada). There is nothing wrong with either male cricketers, but we need to expose our female national players to the young cricketers.

Have more inland tours where these young girls can come and watch or even play a T20 against the Proteas Women’s team after the Proteas men have played at either the Imperial Wanderers or SuperSport Park and not before, because the crowds are not in the stadiums early enough.

Photo 1 Caption: For 26 years Shannon Landman-Kriel has dedicated her life to women’s cricket in South Africa and hopes to continue to champion the development of the sport, thus ensuring the ball and the bat reach more prospective players. Photo: Supplied

Photo 2 Caption: Landman-Kriel has been an advocate for women’s cricket since starting out at the age of 17 when she joined her High School’s boys’ team in order to take part in the game, turning on its head the misconception that the sport was only for boys. Photo: Supplied