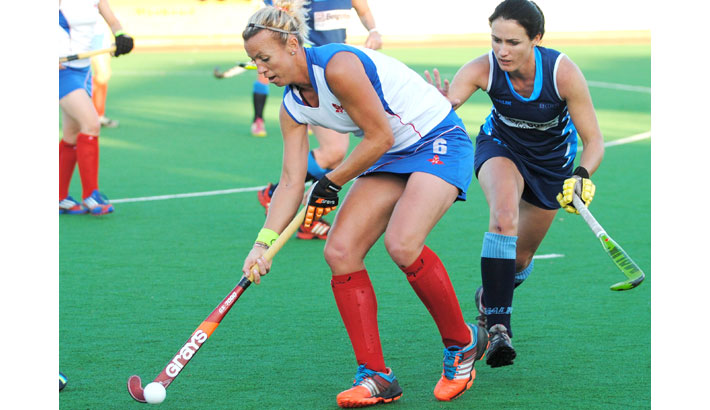 Northern Blues dug deep to win the SA Women’s Interprovincial Hockey Tournament for the first time with a 5-4 victory over Western Province at a packed Greenfields Turf stadium in Pietermaritzburg Saturday.

WP led 1-0 at half-time through a Farah Fredericks goal in the 13th minute but Blues came back to level 1-1 after Kim Hubach scored in the 49th before going on to win a sudden-death penalty shootout for an eventual 5-4 victory, Chanelle van Zyl delivered the shootout’s knockout blow for the Northerns girls.

Both sides had early crosses that flashed dangerously across the face of goal, just missing the strikers’ outstretched sticks and WP opened the scoring in the 13th minute with a well-worked penalty corner converted by Fredericks.

Blues had the opportunity to equalise in the 27th minute, this after a prolonged midfield battle, but the prolific striker Jacinta Jubb had her shot blocked by defender Jacqueline Scheepers. The final was not reaching the heights of some of the pool games, one of which was Blues’ 2-0 win over WP four days earlier.

Too many unforced errors, passes not connecting with receivers, perhaps a consequence of five days of hard matches, player fatigue and gold medal nerves creeping in. With three minutes to half-time Illse Davids’ reverse-stick shot was saved by Blues keeper Phume Mbande and the Pretorians were still very much in the game.

In the 46th minute concerted WP pressure saw Anna Malan come close to scoring but the Blues eventually scrambled the ball away, while Northerns were unfortunate not to score from a PC soon after but Kim Hubach made no mistake with the next, drawing the teams level 1-1 in the 49th minute.

A Tarryn Bright lob at goal had WP fans excited and with 10 left a sublime piece of skill by Izelle Verster saw team-mate Marlene Nortje come achingly close to putting Blues in front. As the clock ticked down it was survival of the fittest as to which side could put this final to be and the Verster magic set up Jubb but her shot on the turn went wide.

WP won consecutive PCs in the last two minutes and the second was cleared with 23 seconds left, the nail-biting final going into a penalty shootout.

After the regulation five shootout opportunities still hadn’t broken the deadlock the final went into three rounds of sudden-death and Van Zyl of Northern Blues delivered the knockout punch for the Northerns girls in their province’s 5-4 victory.

In the bronze medal match, defending champs Southern Gauteng were comfortable winners, coming away 6-1 victors after leading 2-1 at the break. Sammy Prost was rewarded for her hard running all week with a hat-trick while Southerns’ other goals went to the in-form Investec SA striker Lilian du Plessis – a stunning goal that was arguably the best of the tournament – Shelley Russell and Christine Roos, while North West striker Sulette scored the match’s opening goal.

Southerns coach Garreth Ewing was a happier man than after the disappointing semi-final loss the day before against WP in a match they had dominated. “We spoke about the semi-final’s missed chances and were more efficient in the goalscoring department against North West.

“Lilian du Plessis had a good IPT, she has been threatening on the ball, while my standout player has been captain Lisa Deetlefs, who has had to play out of position at times but adapted well, she had led the team very well and lived up to the high standards she sets herself,” said Ewing.

“As to the other sides, Northern Blues have been tactically very strong and will need to be well-prepped to beat Western Province.

In the fifth/sixth place playoff KZN Coastal Raiders were disappointing while underdogs Border were in inspirational form, the East London girls winning 3-2 after leading 2-1 at half-time.

Raiders captain Kelly Madsen got on the scoresheet in the 20th minute but a brace from Claire Hobbs and the final nail in the Durbanites’ coffin off the stick of Nicole Meinie did the trick for Border.

Raiders coach Jodax Beaumont summed it up: “The girls didn’t rock up, our basics were very poor, far too many unforced errors; we lacked the intensity of previous games.”

Border coach Bevan Bennett was beaming with pride at the performance of his team: “The girls were superb, we never felt like underdogs for a moment before and during the match.

Apart from praising every member of his team for their valued contribution, Bennett reserved special praise for captain and right midfielder Marcelle Manson, and centre midfielder and vice-captain Kirsten de Lange: “Marcelle is an incredible captain, she shoulders responsibility, shares her experience, is selfless, lifts the team on the tougher days and backs her team to the hilt.

“She is the best captain at IPT, while in her performance and support of Marcelle, Kirsten played the perfect role,” said Bennett.

Manson returned the compliments. “Bevan is so passionate, so committed, he deserved to be looked at as a possible national coach. We are progressing; we were promoted from the B Section, last year we came sixth and this year fifth.

“We have guts and determination and to keep on par with the top four we need to work at our skill and the pace of the game, and this is where it’s important that our local league improves, is strengthened, as it is vital we continue to be an A Section province.”

Free State were all over KZN Inland in the B Section final for promotion to the 2015 A Section in place of Eastern Province, who went down to Southern Gauteng Witsies in Saturday’s last-place finishes (seventh and eighth) in the top tier, but a 5-0 lead with 30 minutes left was whittled down to 5-3 by final whistle as the spirited host province fought back. “We’re back in the A Section and that’s what counts,” said Free State coach Braam van Wyk.

The SA Hockey Association released a squad at the conclusion of the SA Women’s Interprovincial Tournament chosen by convenor of selectors Mickey Gordon and his panel, from players who were at IPT (See squad below).