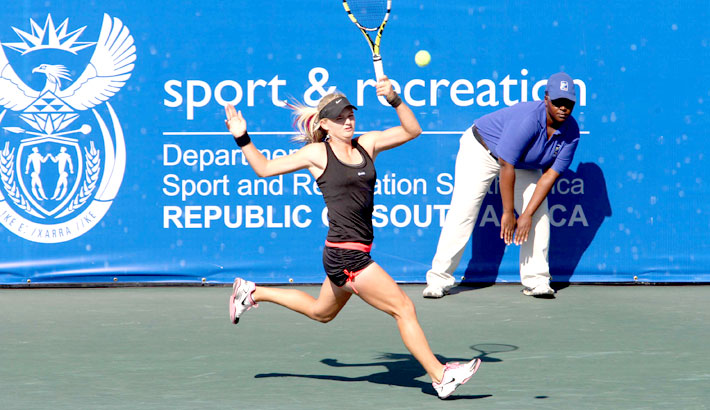 Presently ranked 237 on the world tennis rankings, Simmonds who turns 22 in August, is feeling upbeat and confident ahead of this week’s tournament, where she features as the tournament favorite.

“It’s great to be back in South Africa,” said Simmonds. “These Futures tournaments were great timing for me. To be home for three weeks is a real bonus, as I have only enjoyed a few days at home this whole year.”

Simmonds will be top seed for the second of three Futures tournaments which starts on Monday, and would have been favorite for last week’s Futures 1 but due to her playing in the qualifying of Roland Garros, the International Tennis Federation withdrew Simmonds from the singles of the first Sun City event.

However Simmonds did partner with fellow Fed Cup squad member Michelle Sammons and won the doubles.

Simmonds said that her ranking had slipped out of the top 200 due to not being able to defend her points at the Soweto Open this year that was cancelled by Tennis South Africa (TSA) due to lack of sponsorship.

“I reached the finals in Soweto last year and moved up to 156 on the rankings, but when the tournament was cancelled, I realized that all those points I made would fall off.

“It’s been hard trying to defend those points, but my aim is to capitalize on the next few weeks and months, and to be back in the top 200 by year end.”

The rankings are of importance to Simmonds as the higher she is ranked the bigger the tournaments she can enter.

“If I am in the world’s top 200 I will be able to get into the WTA and Grand Slam events. This is important for my future career as the prize money and points you earn at that level helps you get to the highest level.”

So far this year, Simmonds has travelled extensively on the tour starting off with the Australia swing in January then travelling South America for two months, Senegal, USA, South Korea and Europe.

Simmonds said that it’s not all “glitz and glamour” on the pro circuit. “When you are trying to make it, the sacrifices and demands are great on the player. You travel alone, stay in weird places where the food and cultures are very different.”

However Simmonds does have some important support in her boyfriend Ruan Roelofse, the South African Davis Cup player.

“Ruan and I have a great relationship and good understanding of our individual needs. Ruan is very supportive, and when we can we play in tournament weeks where the men’s and women’s event are played concurrently, at the same venue like these Sun City events.”

Simmonds is quietly confident of her chances at Sun City. “Playing the Futures will give me lots of matches, be more prepared and build confidence for the rest of the year.”

Earl Grainger, South African Fed Cup coach and also in mentor of Simmonds will also be at Sun City to watch his charge and the other Fed Cup squad players entered. Grainger said it was important for him to be able to watch Simmonds play matches.

“In an ideal world I would love to be able to travel with Chanel. But with a lack of sponsorship and financial resources it’s not possible. So to have Chanel home for three weeks works well for both of us.”

Bringing back the Super-Squad system would be hugely beneficial admitted Simmonds. “The Super-Squads of the past produced players like Amanda Coetzer, and I think it is singularly the most important aim and objective for TSA to re-introduce this system.

“There are a ton of talented players that would back me on this one. We just have not got the resources required to crack the big time. We need guidance and financial help, and this is normally the responsibility of national federations, so let’s hope TSA can bring the system back,” said Simmonds.

The pluck SA star said that she is happy with the way she is striking the ball, but feels she has a lot to work on to get to the level she is aiming. “I have been hitting the ball flat of late which isn’t good.

“I normally hit with a lot of spin and place the balls well so I have played a lot of clay events to be able to get back to playing with spin and angle.”

Playing Fed Cup for South Africa rates amongst the highlights in Simmonds career. “I really feel honored to play for my country. At tournaments no-one wants you to win but in Fed Cup they all want you to win. Tennis is such an individual sport so playing in a team and for your country is great.”

Another career highlight was when Simmonds qualified for last year’s US Open, only to draw fellow South African Chani Scheepers in Round 1, who only had good things to say about Simmonds and her future, after beating Simmonds in three tough sets.