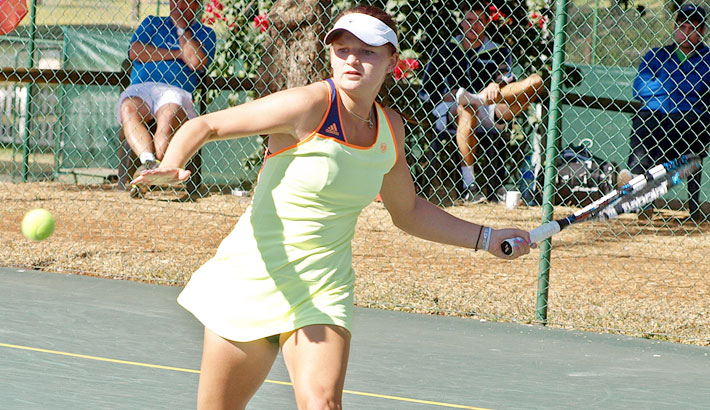 Playing her best tennis all week, Simmonds took control of the match in the fifth game of the first set when she broke serve to lead 3-2. le Roux put so much effort into the first four games, she looked like a tired and weary marathon runner on the changeover after the break.

In fact, le Roux broke Simmonds serve in the first game of the match, and looked like a player on a mission.

Simmonds promptly broke serve back the second game and then both players held serve until the sixth game where Simmonds broke to lead 4-2. Simmonds closed out the first set 6-2.

“I was very consistent, kept the ball going yet played with good pace which tired Madrie” said Simmonds. “I was also playing the high ball which forced Madrie to put in extra effort on her shots.”

Simmonds got the early break (second game) in the second and raced to a 3-0 lead.

Two further breaks by Simmonds in the sixth and eighth games gave Simmonds the set 6-2, the match and her second Futures title in South Africa (first was the Potchefstroom Futures in 2012).

Simmonds made it a doubles title when she teamed up with fellow Fed Cup squad member, Michelle Sammons to win the doubles title. The top seeds beat fourth seeds, Ilze Hattingh and Madrie le Roux (the former African junior champions) 6-3 6-3 in the final.

Photo 2 caption: Chanel Simmonds of South Africa was crowned the Sun City Futures 3 Champion on Friday. The third-seeded Michelle Sammons had beaten 2-Natasha Fourouclas 2-6 7-5 6-4 in an all-South African final in the first Futures tournament on 31 May, before the unseeded Ilze Hattingh upset French second-seed Clothilde de Bernardi 6-1 6-3 for the her maiden Futures title, in the second tournament’s final, on Saturday, 7 June, 2014. Photo: BLD Communications