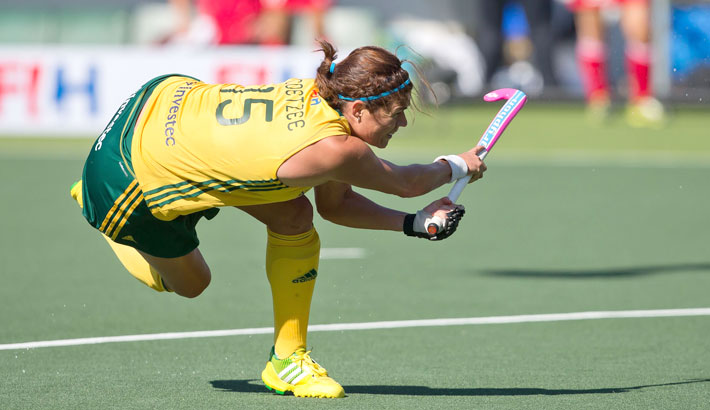 A 2-0 win over Japan gave the Investec South Africa women’s hockey team a ninth place finish at the World Cup in The Hague, Netherlands on Friday.

And it was a fitting end to the 19-year career of one of sport’s most remarkable figures, world record goalscorer Pietie Coetzee, who notched up her 282nd goal in her 287th Test match to give SA the lead in the 59th minute.

Coetzee’s penalty corner success, which came via a trademark drag-flick, was followed in the 69th minute when on-song striker Dirkie Chamberlain scored from the penalty spot after fellow frontrunner Kathleen Taylor was upended in the strike zone.

As they have in the majority of their matches here, world number 11 SA dominated against the world’s ninth-ranked team and the victory sets them up for successful July tournaments at the Investec Cup in London and Commonwealth Games in Glasgow.

Japan and SA were next-door-neighbours in the tournament hotel but that’s where the neighbourliness ended, with outstanding captain Marsha’s Cox’s charges overwhelmingly in control of the 70-minute match.

SA Had the Upper Hand

SA had double the number of incursions into the strike zone, one every three minutes, and crucially – unlike the matches they should have won but didn’t – four out of five shots at goal were on target, leaving Japan goalkeeper Yuka Yoshikawa with plenty to do.

The stopper made a number of fine saves, while at the other end of the pitch her counterpart Anelle Deventer mixed lengthy periods of inactivity with two crucial saves at close-range from the miserly four shots on goal the improved SA defence allowed their opponents.

Where SA were again lacking was at penalty corners, where just one in nine was successful, while the Japanese could only manage to get one such goalscoring chance from the set-piece play.

Injury Prevents Pacy Damons from Taking to the Field

Pacy striker Sulette Damons, who has given defences the most torrid of times in the three matches of the six she managed to play here, would have relished the freedom with which her team-mates played, but rest was the wisest move bearing in mind the important tournaments to come next month.

For Japan, apart from goalkeeper Yoshikawa, captain Miyuki Nakagawa and influential midfielder Mayumi Ono had good games, but there was not enough cohesion and all-round efficiency to bother the South Africans all that much.

The day started as none before it, when Investec South Africa women’s hockey team superstar and world record goalscorer Pietie Coetzee tweeted her retirement announcement on the bus to the Kyocera Stadium.

Fittingly, Coetzee (35) scored the opening goal in SA’s 2-0 win over world number nine Japan, and a goal in the last Test match of a career that has spanned nearly 20 years was the perfect way for Investec South Africa women’s hockey team superstar and world record holder Pietie Coetzee to bow out of the game.

The 35-year-old South African hockey icon has ended with an astonishing 282 goals in 287 Test matches.

Probably the most amazing statistic in Coetzee’s glittering career is that her 282 goals in 287 Test matches was achieved despite retiring for five years at the age of 27 when at the peak of her powers.

Coetzee has always played the game for enjoyment and has said that she was burnt out to a degree from the goalscoring pressure and expectations.

Coetzee broke Russian Natella Krasnikova’s world record 220 of goals with a first-half hat-trick that fittingly consisted of every method of scoring in hockey – a field goal, a penalty stroke and a penalty corner – against the USA at the Champions Challenge tournament in Dublin, Ireland in 2011.

The modest Coetzee was never one to be impressed by records, especially her goal tally, always emphasising that it was the team that counted.

Playing in the unfamiliar position of right half in this tournament, as a late replacement for the desperately unlucky double Olympian Lenise Marais, Coetzee has as a result had less goalscoring chances, but two successful strikes from her six World Cup matches would not have been a bad return for most goalscorers.

Coetzee is an iconic figure in women’s sport in South Africa, is the player that thousands of schoolgirl hockey players in the country would like to be, and runs coaching clinics back home as a professional coach, a business she hopes to build on in the time to come.

A product of Oranje Meisieskool in Bloemfontein, Coetzee made her debut as a 16-year-old Grade 11 schoolgirl at a tournament in the United States in 1996, played in three Olympic Games – Sydney, Australia in 2000, Athens, Greece in 2004 and in London 2012, as well as two World Cups, at Delhi in India in 2010 and finally, The Hague in The Netherlands in 2014.

Surely the world will never again see a sportsperson come out of a five-year-retirement with the same personal success as where she left off.

Photo 1 caption: World record goalscorer and hockey superstar Pietie Coetzee in classic pose, scoring her 282nd and final goal in her 287th appearance for South Africa, putting SA’s first points on the board on their way to a 2-0 win against Japan at the Hockey World Cup 2014, in The Hague, Netherlands, on Friday 13 June, 2014. Photo: Stanislas Brochier