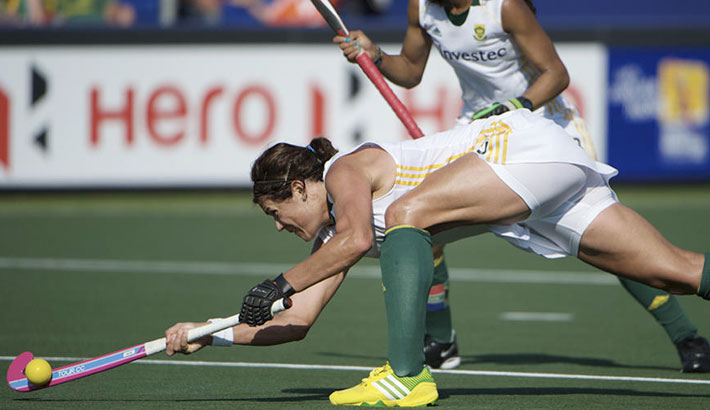 World number seven China beat the world’s 11th-ranked Investec South Africa women’s hockey team 4-3 in a heart-stopping World Cup Group B match in the Hague Sunday, after the score was 2-0 to the Asians at half-time.

On balance SA could have won the match, but it was not to be.

In the fifth minute the Chinese forwards found a way through and their second penalty corner saw keeper Anelle van Deventer make a fine reflex save but the ball somehow dribbled over the goalline from Mengrong Wu and it was 1-0 after six minutes.

Nicolene Terblanche got in for in a shot at the other end before Dirkie Chamberlain’s effort forced SA’s first PC but Pietie Coetzee’s conventional beat flashed past the post. In the 11th another chance came SA’s way but Chamberlain’s great ball from the right evaded sticks when a goal seemed almost certain.

Coetzee then made a superb tackle as did left half Quanita Bobbs to keep the tricky Chinese attackers from making goalshots. The pace continued unabated and a Damons deflection looped over the crossbar.

Disaster struck SA in the 125th when a defensive lapse let in Meiyu Liang and her pass to Wu was duly converted (2-0).

Lisa Deetlefs’ PC slapshot was blocked by a Chinese defender and then it was the fast-breaking Chinese to win two consecutive PCs, the first stopped on the line by captain Marsha Cox, the second saved by the keeper.

A great counter resulted in SA earning another PC and Coetzee’s drag-flick was palmed away by keeper Dongxiao Li. SA made several more strike-zone entries until three consecutive PCs went their way following excellent build-up, but the Chinese survived.

With two minutes left Damons’ extreme pace outflanked the China defence but her superb flat cross at full stretch from the right wing found no SA attackers on hand to deflect home.

Turning around 2-0 down, SA had a mountain to climb in keeping their chance of going into third place in Group B alive, with one round still to play.

Sanani Mangisa had replaced Van Deventer in goal and SA started well, making several strike zone entries and getting in a couple of shots, and finally there was joy in the 42nd minute for SA when Tarryn Bright’s pinpoint pass found Kelly Madsen who made no mistake (2-1).

SA continued the pressure but it was China who broke down the left to set up Wang Na for a superb strike and the Asians had restored their two-goal cushion after 53 minutes. (3-1).

With 11 minutes left the stats reflected that SA had dominated the game and six PCs to four was just one in the African champions’ favour.

Coston hit the post from field play with nine left and got her goal when she tapped-in in the 62nd minute following Kathleen Taylor’s shot for the score to go to 3-2.

An on-fire SA then forced a PC in the 66th minute (four minutes left) and world record goalscorer Coetzee made it 3-3 for her 281st goal in her 285th Test match.

But the joy was short-lived as Mengyu Wang made the score 4-3 with a pinpoint PC strike in the 68th for the 4-3 final score to China.

SA appealed for a PC with 45 seconds left but to no avail.

Now SA need to beat log leaders the USA in their final Group B match at 2.30pm Tuesday and hope that bottom-placed England overcome Germany’s challenge, for the South Africans to finish fourth in the Group and have a shot at an unprecedented seventh place in the classification matches.

Main Photo Caption: Pietie Coetzee scores Investec South Africa’s third goal to briefly draw level with China in their fourth FIH Rabobank Hockey World Cup tie in the Hague on Sunday. It was heart-break for the South Africans, who came back from 3-1 to agonisingly lose the match in the final minutes, when China scored their fourth to secure their third place on Group B’s log, with 1 final fixture to play. Photo: FIH