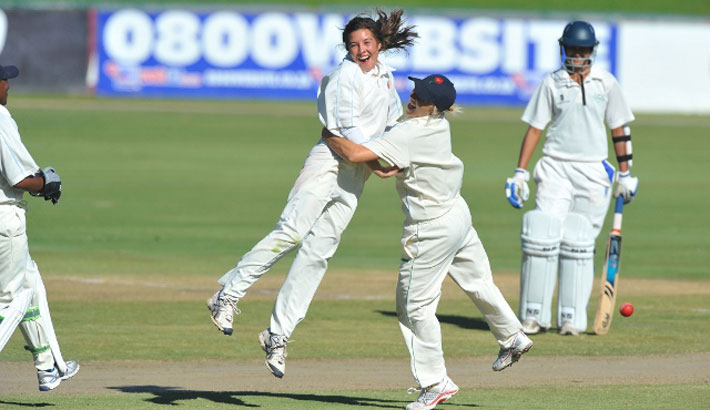 It was a high-scoring week as teams looked to end the year on a high in the last round of matches for 2013 in the Cricket South Africa (CSA) Women’s Provincial League. Six centuries were scored, including the top score of the League so far, an unbeaten 150 runs by 17-year old, Suné Luus from Northerns, in their match against Limpopo.

Northerns posted 279/2 in their 50 overs after electing to bat first. K Tjiane (54) provided good support to help her side reach the competitive score. In their reply, Limpopo could not contend with a fired-up Luus, who went on to take four wickets for just one run in her seven-over spell. C le Roux also took a notable 3/8 to skittle the hosts out for just 21 runs. Northerns won by 258 runs.

Northerns had a good week, beating Easterns by nine wickets in their second match.

Chloe Tryon made the second highest score so far when KwaZulu-Natal (KZN) scored a six-wicket victory over North West (NW) in spite of Lizelle Lee’s 144. NW batted first, scoring 230/6 thanks to Lee and T Brits (49). Tryon led KZN to victory, hitting 148 not out for the win.

NW’s T Brits ensured her side secured at least one of their matches when she returned unbeaten for 101 in her side’s match against KwaZulu-Natal Inland (KZNI) in Potchefstroom. The latter made a competitive 238/4 thanks to M Steenkamp (69), T Cronje (45), C Cannon (44*) and G Ngcobo (26*).

The hosts secured victory in 36 overs with Lee (44) and A van Schoor (35) providing useful runs to get their side to victory.

Alison Hodgkinson scored a swift 138 off 131 balls to lead Boland to a 235-run thrashing over South Western Districts (SWD). Yolandi Potgieter fell nine runs short of a century, while I Pienaar added 41 to the board to get Boland to a daunting 322/3. SWD could not reciprocate in kind as Boland’s Alicia Smith took four for 13 to restrict them to 87.

In their other match, SWD suffered a 10-wicket defeat to WP thanks to a six-for, taken by Moseline Daniels in Oudtshoorn. The hosts were bundled out for 64 in 22.2 overs. Robin Appels led the Western Province (WP) reply, top-scoring with an unbeaten 42 runs to get her side to victory in just under nine overs.

In other matches, Susan Benade scored 89 from 106 balls to lead Griqualand West to a 60-run victory over Free State; Boland beat Eastern Province (EP) by four wickets despite Dané van Niekerk’s top scoring 75; and EP suffered back-to-back losses after Shandré Fritz (56) and Appels (5/13) led WP to a solid 145-run win in their clash the following day.