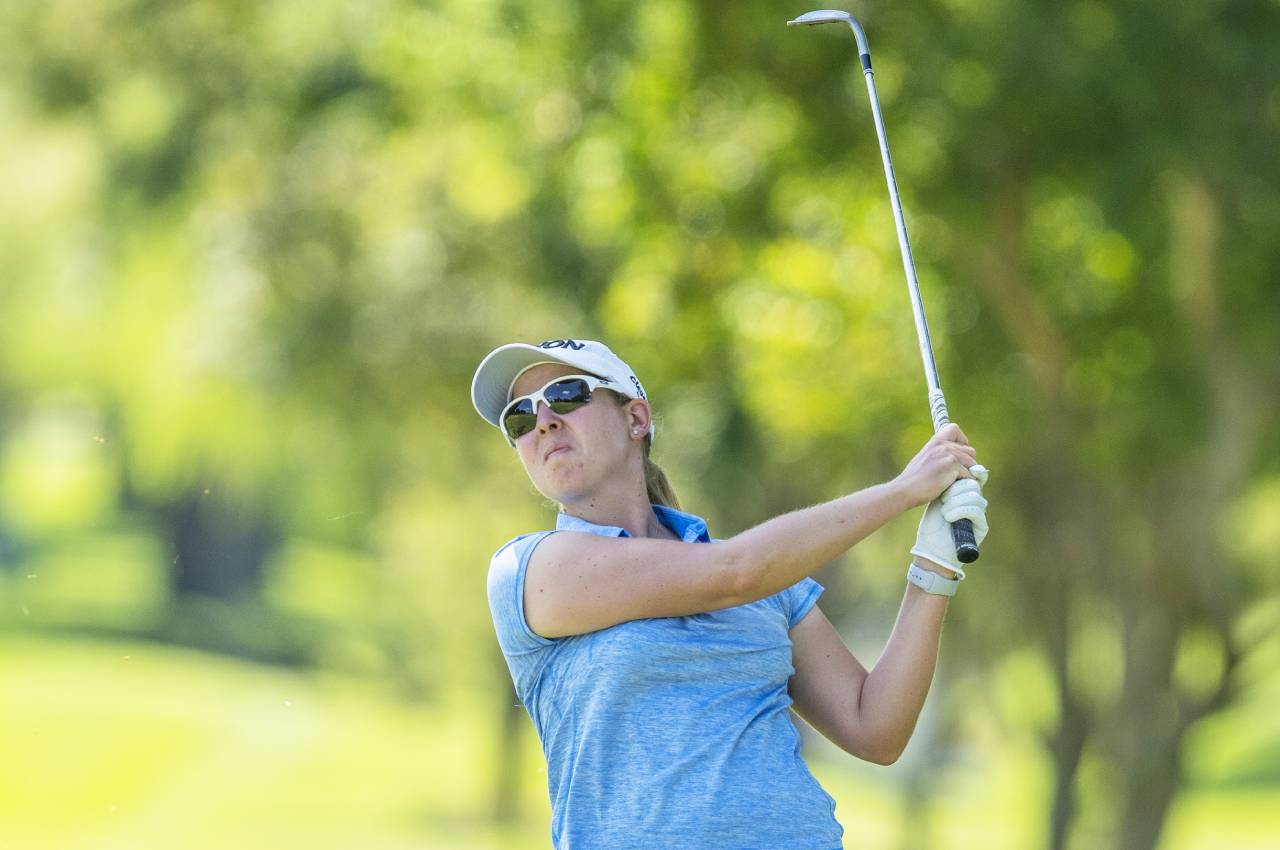 Sizzling 63 Sees Buhai Surge to the Top in Jabra

Olympics-bound Ashleigh Buhai equalled her lowest career round at Glendower Golf Club with a stunning 63, which saw her surge into a four-shot lead in the opening round of the R600 000 Jabra Ladies Open on Wednesday, 4 March 2020.

It was a spectacular start to the penultimate event of the 2020 Sunshine Ladies Tour season for Buhai, who overhauled Stacy Bregman for the top spot.

Bregman had earlier ramped up the fans with a flawless five-under 67, while 21-year-old Kelsey Nicholas stunned with a four-under 68 to finish a further shot back in third.

Mimmi Bergman from Sweden and Nicole Garcia carded rounds of 69 to share fourth, but local favourite Casandra Hall missed out on the three-way tie for fifth after a late bogey on the par four 16th saw her sign for 70.

“I believe it’s the lowest score since the changes to the course.” – South African golfer, Ashleigh Buhai.

Nobuhle Dlamini – back in action after a two week stint on the Ladies European Tour in Australia – dropped two shots early in the round, but the eSwatini golfer rallied with a trio of birdies to grab a seat on the distinctly international bus on one-under.

After an opening pair of birdies, the 28-year-old Johannesburg golfer followed a third gain on the seventh with an eagle on the par five eighth. She atoned for a lone bogey on the ninth with five birdies on the bounce from the par four 12th, which propelled her to the summit.

“I hit my drives and long irons really well.” – Buhai on her performance at Glendower Golf Club.

Just a little over a year since Buhai picked up her 10th title on the local circuit with a wire-to-wire performance in the Canon Sunshine Ladies Tour Open at Irene Country Club, South Africa’s leading golfer was delighted to set a blistering pace in her first start of the season.

“I’ve had a couple of other 63s before – on the East and West courses at my home club (Royal Johannesburg and Kensington Golf Club), at Durban Country Club and at Greenbay on the LPGA Tour – so it’s tough to compare, but it felt great to put a 63 on the card at Glendower, ” Buhai said.

“I believe it’s the lowest score since the changes to the course, but we had placing, so it won’t be an official course record. After all the rain on Sunday and Monday, the course played long and it was challenging in the wind. I played really well in Australia so my game was in good shape and I did some work with my coach Doug Wood last week. I hit my drives and long irons really well and I could wedge it close because the greens are still soft and receptive.

“I holed a nice 20-footer on the first and nearly holed my approach on the second, so it was a really great start. The next couple of holes is a tough stretch, but I kept it going and took advantage on seven and eight. I hit a bad tee shot on nine and took my punishment.

“I hit it close on 10 and 11 and missed the putts, but on 12 holed the birdie putt and that sparked the run. I hit a great bunker shot from 30 metres to eight foot on 13, a good 9-iron on 14 and holed a downhill putt and I got a little lucky on 15 after pulling my tee shot. Just knocked it on and holed a 25-footer for birdie. I Nice birdies, but that’s what happens when things are going your way.

“On 16, I made a really good birdie. I was in the left rough and I hit a hybrid about 20 foot left of the pin where I had to hit it too, and holed the putt. The last two holes was a little scrappy, but I scrambled well and I was proud of myself for saving two great pars. Really pleased with this start.”

The round was by no means stress-free, but her more relaxed attitude took the edge off.

“I’ve worked hard to stay more relaxed during the round and it is definitely helping me to score. I knew there is an expectation for me to do well, but I try not to put pressure on myself.”

Bregman has also been working hard on improvements to her game in the off-season and began to see the fruit of her labour in the Joburg Ladies Open last week.

“I played really well at Soweto Country Club, but I got a few unlucky bounces and I couldn’t quite get the measure of the greens,” Bregman said. “I felt confident, though, with the game I was bringing to Glendower. I hit a lot of fairways and greens today and I putted really well.

“Unfortunately I lipped out for birdie on the par five eighth, but I’m happy with birdies on two. The greens are absolutely awesome; you just have to allow enough break and trust your green reading. This course is such a good test of golf and probably one of the best courses in the country. To shoot five-under in a bogey-free round; I’m pretty chuffed with that.”

Nicholas, playing in her second season on the Sunshine Ladies Tour, was equally delighted with her performance. “I had four birdies on the front and I made a great birdie on 17. It was so unexpected. I was 15 metres away, but my caddie and I agreed on the line quickly and I just committed to the putt.

“It was in the whole way. I’ve never thrived at Glendower. My caddie kept saying its home course advantage and I kept saying Glendower and I don’t get along; I’m just over the moon with a 68,” said the Royal Johannesburg and Kensington golfer.

First Round Scores:
(All competitors RSA unless otherwise stated and amateurs are indicated AMA)

Photo 1 Caption – South Africa’s top ranked Ashleigh Buhai opened up a four-shot lead with a nine-under-par 63 in the first round of the R600 000 Jabra Ladies Classic on the Sunshine Ladies Tour at Glendower Golf Club on Wednesday, 4 March 2020. Photo: Sunshine Ladies Tour.