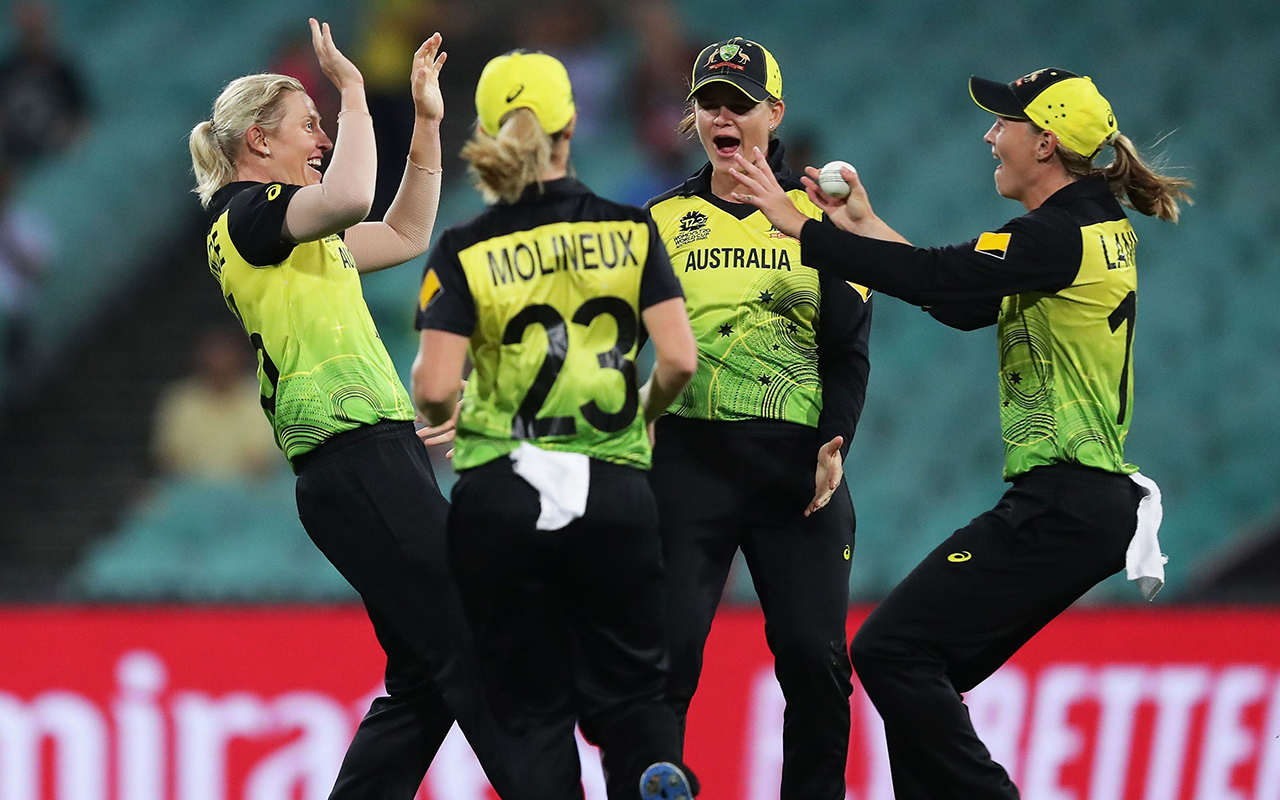 Momentum Proteas Out of the T20 World Cup

South Africa’s hopes of reaching the final of the Women’s Twenty20 (T20) World Cup were crushed on Thursday, when they lost by five runs (DLS) to the defending champions, Australia, in a rain-affected match at the Sydney Cricket Ground.

Persistent rain washed out the first semi-final between England and India, with India going through because they had finished top of their group.

“We are very emotional – it is very hard when you keep missing out at the last minute!” –Momentum Proteas skipper,  Dané van Niekerk

For a time it appeared that the second semi-final might also be washed out, but the rain finally cleared long enough to allow for a full 20-over match. South Africa won the toss and sent Australia in to bat.

Australia got off to a flying start and appeared to be taking the game away until Ayabonga Khaka broke the opening partnership, with captain Dané van Niekerk taking a very good catch to dismiss Alyssa Healy for 18.

Australia were well on their way to a massive score when the South African bowling attack put the brakes on, taking three wickets in three overs. Youngster Nadine de Klerk, standing in for the experienced but ill Marizanne Kapp, bowled Beth Mooney for 28 in the ninth over.

Disciplined Effort in the Field

In the next over, Jess Jonassen was caught by Shabnim Ismail of Nonkululeko Mblaba for one, and then De Klerk struck again, when she had Ashleigh Gardner caught behind by Trisha Chetty without scoring.

The Proteas kept the Australians in check, making it difficult for them to score and De Klerk struck again in the 17th over, when she bowled Rachel Haynes for 17.

As Australia finished their innings on 134 for five, the rain came down again. For a time it appeared that the game might have to be called off, but eventually, South Africa were able to go in to bat, needing to score a reduced 98 runs off 13 overs.

The early wickets of Lizelle Lee, Van Niekerk and former captain Mignon du Preez put the Proteas on the back foot, but Suné Luus and Laura Wolvaardt, hero of South Africa’s win over Pakistan, brought them back into the match, despite the disciplined bowling by Australia.

Luus fell in the 12th over, when she was caught by Mooney off Megan Schutt for 21 off 22 balls, and South Africa needed 19 runs off the last over.

Chloe Tryon, who is known to be a big hitter, went out off the first ball of the over, caught by captain Meg Lanning off Jonassen for one. Wolvaardt hit the next ball for four, to keep South Africa in with a sniff. A brilliant stop by Mooney meant the following ball went for just two, and Wolvaardt could only scramble one off the fourth ball of the over.

De Klerk hit the fifth ball for four, but it was just not enough – South Africa needed eight runs off the final ball.

By this time, the rain was coming down again and so were the South African tears. De Klerk swept the final delivery to deep backward square leg for one, and Australia won the match by five runs (according to the Duckworth–Lewis–Stern method).

“Credit to Australia – they played very well,” said skipper Van Niekerk after the match’s result. “I was so pleased with Nadine de Klerk’s performance – three for 19 – I couldn’t have asked for more.

“This is a very talented team, and most of the players will still be around for the next World Cup at home in South Africa – the best place to play cricket,” she said.

Photo 2 caption: Nadine de Klerk celebrates with team mates after taking the wicket of Ashleigh Gardner in her innings of 3 for 19 (4 overs) the best bowling figures by a South African in a World Cup semifinal, and the fourth-best Women’s World Cup semifinals of all time. Photo: ICC