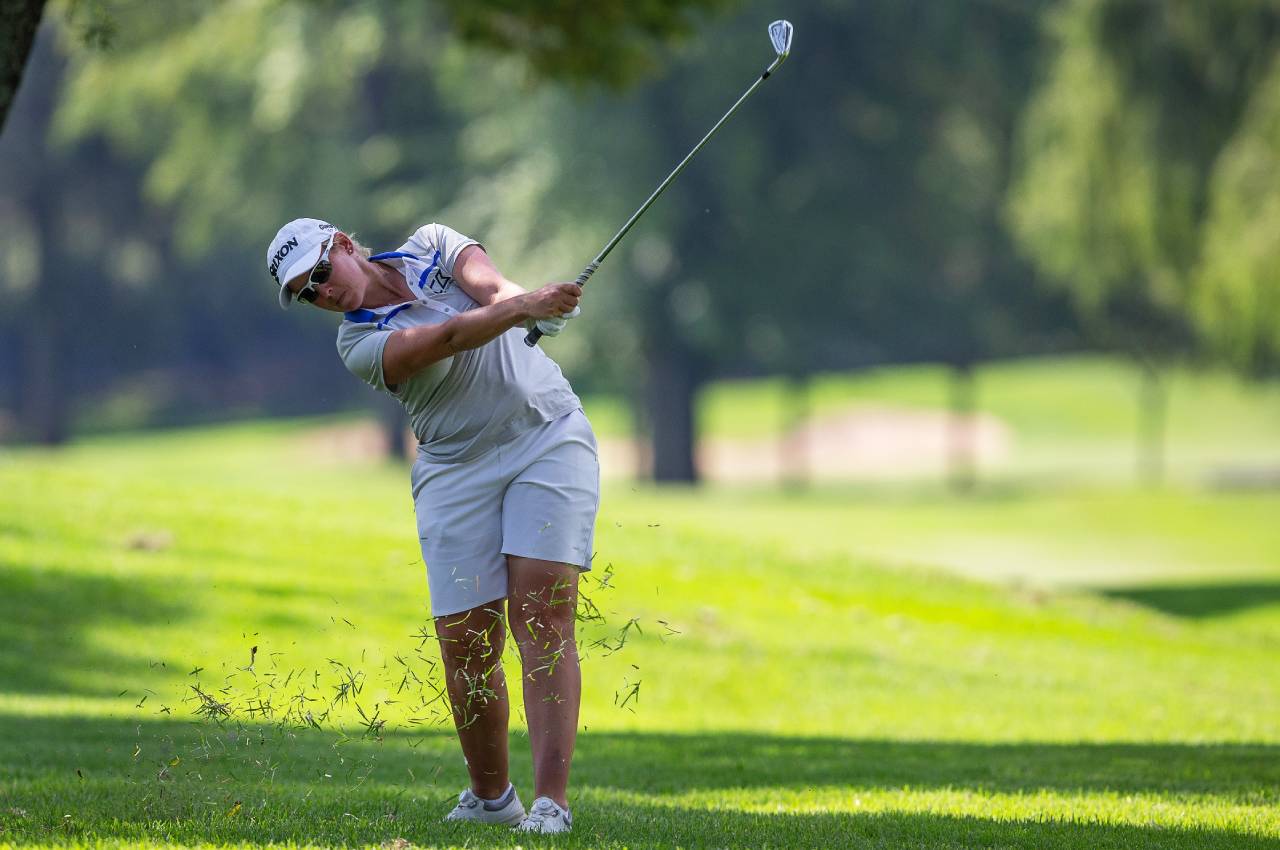 Bregman and Hall Give Chase at Jabra Ladies Classic

Ashleigh Buhai signed for a three-under 69 to retain her lead on Thursday, 5 March 2020, but Stacy Bregman and local fan favourite Casandra Hall are hot on her heels with 18 holes to play in the R600 000 Jabra Ladies Classic at Glendower Golf Club.

Buhai could not quite hit the heights of a blistering 63 on day one, but another flawless trip around the championship layout kept her at the summit. She will start the final round on 12-under-par 132, four shots clear of Bregman, who returned a bogey-free 68.

Hall – the Sunshine Ladies Tour’s most recent Ladies European Tour graduate – hauled herself into the chasing pack with a joint best of the day 66 to finish four shots adrift on eight-under. Scotland’s Jane Turner, who visited the winner’s circle just two weeks ago at San Lameer, reeled in a trio of birdies over the last six holes for a 69 to move to fourth on four-under.

Kelsey Nicholas, who rallied after a nervous bogey-bogey start to keep pace with playing partners Buhai and Bregman, signed for 73 to finish alone in fifth on three-under, while last week’s Joburg Ladies Open winner Monique Smit is tied for sixth on two-under alongside 2019 Investec Order of Merit winner Nobuhle Dlamini from eSwatini, India’s Sharmila Nicollet and Rachel Rossel from Switzerland, who shared the low-round honours with Hall.

“I’ll have to keep my foot on the gas in the final round.” – South African golfer, Ashleigh Buhai.

Buhai had a great start to the season with a fine top 13 finish in Australia before she was forced to return home when the LPGA Tour cancelled events in Thailand and Singapore due to health concerns about the Covid-19 virus.

She was pleased with her form over the first two days and looking forward to the final round battle.

“If it was offered, I would have taken 12-under before I teed off. I had a number in mind; I thought if I shot three rounds of four-under, I’d have a good chance to win,” the 30-year-old Buhai said.

“I’m already at 12-under, but I’ll have to keep my foot on the gas in the final round. Stacy played really well and I saw that Cas also had a great second round. Stace and I grew up playing this course and its Casandra’s home course, so the local course knowledge is definitely coming into play.

“It helps that I know where the ball is going and stayed patient, because I didn’t have to chase. The pins were a little more tucked today and I didn’t hit it as close, so you play to the big spaces and work it into the flag. If you don’t, at least you still have a putt.”

“It’s been a while since I struck it this good and it’s coming at the right time of the season.” – South African golfer, Stacy Bregman.

Bregman was chuffed with the result of her careful course management.

“I think nine-under is a great score. Glendower is a tough test; it’s a true test golf. You have to hit fairways and you have to put yourself on the right side of the flag to score well and I’ve done that well for the last two days,” said the Country Club Johannesburg golfer.

“It’s been a while since I struck it this good and it’s coming at the right time of the season. A win this week gets you into the Jabra Ladies Open, which is the qualifier for the Evian Championship. Next week, we have the Investec SA Women’s Open, co-sanctioned with the Ladies European Tour (LET). I want to perform well at Westlake and take that form to our next LET event in Saudi.

“My wedge-play has been really good and I’m holing a lot more putts. The greens here are really good and fast and if you read it good and hold you lines, you can get it going. This course has its challenges, but it’s also fair, because there is always a side to miss it. I worked really hard in the off-season with my new coach and it’s so good to see it all come to fruition here in the Jabra Ladies Classic. I’ll need to shoot four- to five-under to beat Ash, because she is just playing fantastic golf at the moment, but I’m really happy with the direction my game is moving.”

Hall attributed her sizzling 66 to a strong iron-game.

“I saw my coach Robbie Stewart after I got back from the LET Q-School in Spain and we worked on my game up,” she said. “I hit a few bad drives, but I missed it in the rights spots. I didn’t sink many amazing birdie putts, but I hit my irons unbelievably well, I was throwing darts at the pins all day.

“After all the rain the course, and the greens, are a lot softer than last week. It’s a big change and that has really helped me to attack the flags. But I also love the course. It’s my home course and it sets up nicely for me, especially the faster greens, which I love.”

“I drove the ball incredibly well and I hit every fairway. My wedge-play was good, too and I only missed two greens all day. I needed a low round to make the cut, and now I just have to do it all over again tomorrow so I can play myself into the field for the Investec SA Women’s Open.”

Second Round Scores:
(All competitors RSA unless otherwise stated and amateurs are indicated AMA)