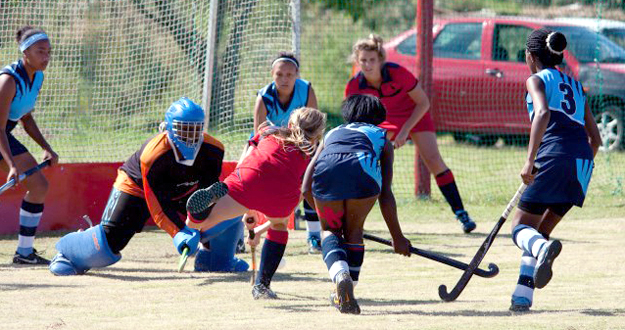 The defending champions, Creston College took on the 2011 champions Kokstad College in a hard-fought game where star player Donna Small secured their place, when she netted the only goal in the regional finals with a handful of minutes remaining on the clock.

Kokstad dominated the game but were unable to turn the possession into goals. Small, who scored a hat-trick earlier in the day, fired in a pass from the top of the circle that was stopped by the Kokstad goalie, Amephi Gqoboka but Creston’s captain did the basics right, following up the shot and slapping in the ball giving her team a 1-nil advantage.

Tournament director Les Galloway stated, “It was a superb day of hockey. All ten teams enjoyed themselves immensely. Well done to all the teams that participated, you all played fantastically. And to Creston College, congratulations and we look forward to seeing you at the finals.”

Ten teams from around the Ugu and Sisonke regions took to the fields in scorching hot conditions where they competed in two pools, each playing 20 minute games going one way. After the pool games, the teams played cross pool games.

Second in their pool, Port Shepstone High School was involved in two rolling penalties shoot outs that decided their fate. The first against Kokstad in the first semi-final saw the game end with a goalless draw. After the five allocated penalties, the teams were level on 3 all, thus going into a sudden death. Sheppie weren’t able to convert their next opportunity with Kokstad pouncing on theirs, securing their place in the finals.

The second rolling penalties for Port Shepstone were at the end of the third and fourth play-off against Suid-Natal. Suid-Natal got their nose ahead and finished their day in third spot.

Voted as Most Promising Umpire for the region, Creston College’s Dύnne Marx will get the opportunity to shine with the whistle as she joins her team at the finals at Thomas College and St Marys’ in July.

Managing Director for SPAR KZN, Rob Philipson commented, “We set out to make this tournament a vibrant, festive yet competitive event and I believe three years into it, we have achieved this vision. The schools look forward to the regionals playoffs with the hope of them potentially going through to the finals!”

The tournament has a Facebook page – SPAR Aquelle School Girls’ Hockey Tournament, and a Twitter account @SPARGirlsHockey. Spectators and players are encouraged to visit the page and check out all the action from the regionals.