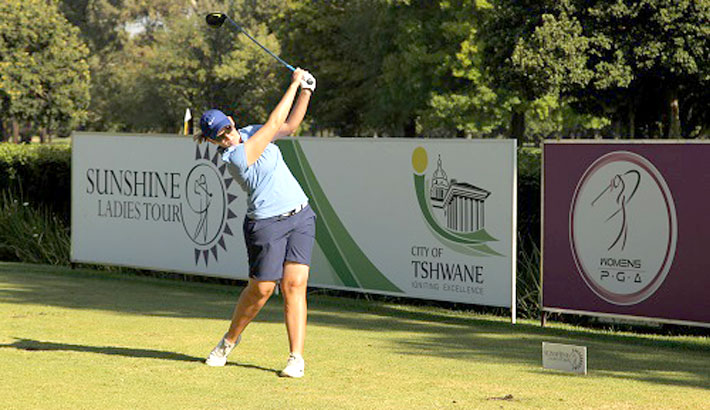 Ashleigh Simon lit up the back nine at Zwartkop Country Club to open up a one shot lead on Monique Smit in the second round of the Ladies Tshwane Open on Wednesday.

The four-time Sunshine Ladies Tour champion lagged three shots behind Smit at the turn, but served up a birdie-fest to complete the inward loop in 29 strokes.

A six under 66 rocketed Simon into pole position on seven-under-par 135, but if 26-year-old wants to pad her stash of trophies, she will have to fend off in-form Smit. The Southern Cape golfer enjoyed two podium finishes in 2014 and a flawless 68 left her hot on Simon’s heels.

“Monique has been playing great golf in the last two events and she is definitely a threat,” Simon said. “Although my ball striking has been superb since the Ladies Joburg Open, but my putting was poor, but I found something on the weekend. I putted really well; just need to keep rolling them in now.”

Simon started the day in joint second on two under with Smit, Liezl Klotz and amateur Kaleigh Telfer.

Overnight pacesetter Nobuhle Dlamini faltered with double bogeys at two and four and Smit pounced with birdies at one and three to take the lead, but Simon’s putter remained cold and she turned one under after a bogey at the par-four sixth.

The the first birdie putt dropped at 10 and another at 11. Just like that, her putting woes were over.

“I lipped out for birdie at 12, but I holed another birdie putt at 13 and I knew I was back,” she gushed.

“I realised that I was pushing my right shoulder forward, so I worked on keeping my shoulder under my chin on the follow through. It didn’t really come together on the front nine, but once I got those first couple of putts in the hole, the confidence was back.”

Smit kept her edge with a birdie at 12m, but Simon overhauled her with a hat-trick of birdies over the closing holes.

“I made a great par-save at 14 and lipped-out for birdie at 15, but I caught up with Monique with a birdie at par five,” Simon said.

“We played off the tips, so I hit driver and laid up with a three-wood. I hit a lob-wedge very close and made the putt. At 17, I hit eight-iron to 12 feet and holed the putt, but I thought I might be in trouble at 18 when I caught the fairway bunker off the tee.  I had a pretty decent lie, though, and smashed a three-wood to 30 meters short of the green. I chipped to four feet and boxed the putt.

“It’s a great feeling to produce the kind of scores I know I’m capable of. I’m definitely going to push the boat out in the final round, because I will miss a few tournaments when I leave for Australia next weekend.

“Decent finishes this week and next week in the Cape Town Ladies Open will leave me in a strong position on the Chase to the Investec Cup for Ladies Points Standings to make the season-finale.”

The final round could well turn into a two-horse race between Simon and Smit, as England’s Rebecca Hudson and Telfer finished well back in a tie for third on 142.

Hudson – who claimed maiden breakthrough in the Chase to the Investec Cup for Ladies at Houghton Golf Club last week – carded a 68 while South Africa’s top ranked Telfer returned a 73.

Second Round Scores at the Ladies Tshwane Open played at the Zwartkop Country Club on Wednesday, 3 February, 2016:

Photo 1 caption: Ashleigh Simon shot a six-under-par 66 to go one clear or the field on Day 2 of the Ladies Tshwane Open at Zwartkop Country Club on Wednesday, 3 February, 2016 in Pretoria. Photo: Petri Oeschger/Sunshine Tour/Gallo Images

Photo 2 caption: Overnight pacesetter Nobuhle Dlamini faltered with double bogeys at two and four after blazing a trail to end round 1 by one shot on Tuesday. Photo: Petri Oeschger/Sunshine Tour/Gallo Images

Photo 3 caption: Placed second alongside Simon after round 1, Monique Smit challenged the club-house leader for most of the second round, carding a five-under 67 go into Thursday’s final round one shot behind her.  Photo: Petri Oeschger/Sunshine Tour/Gallo Images