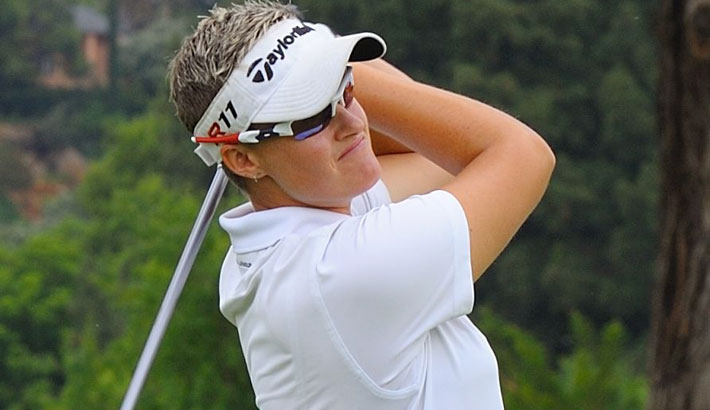 South Africa’s Monique Smit made a flying start to the Dimension Data Ladies Pro-Am and stormed to a one stroke lead over two-time Ladies European Tour winner Ashleigh Simon in the first round of the R150,000 Sunshine Ladies Tour event on Saturday.

The 23-year-old from George was in scintillating form at her home course, and marshalled 10 birdies and a solitary bogey for a nine-under-par 63 at Oubaai Golf Club near George.

Simon, however, was equally impressive and her superb approach play at the 5253-meter Ernie Els-designed layout served up six birdies and an eagle to answer Smit with a flawless 64.

Although Simon enjoyed a fair bit of crowd support, the members’ support undoubtedly belonged to Smit, a member at Oubaai and the region’s number one amateur until she turned pro in 2011.

“It was unbelievable to have all the support out there,” Smit gushed. “You are so isolated when you play abroad, and it was really fantastic that the locals and the members came out in such great numbers to support myself and the other players.”

Smit also enjoyed the format, which showed at the end of the round when she and her amateur partner tied Lee-Anne Pace and amateur Ladina King on 60 points.

“My partner, Popo Molefe, was also on fire and we dovetailed really well,” she said. “It was a lot of fun, playing in this format, and I we will go all out on Sunday to beat Lee-Anne and Ladina.”

Having reached the turn with a trio of birdies, Smit led the field at four under. She reeled in three more birdies by knocking in a six-footer at the 14th, and two perfectly timed 25-footers at the 15th and 16th.

“Today, I just saw the line and I could visualise the putts dropping,” she said.

“It’s rare to have your putts behave exactly as you see them roll, so I took advantage. Tee to green I was solid, too, except at the 18th, where I hit a five-iron that ended up just right of the green. I chipped it to about 12 foot, and again, just followed the line I saw to the hole for birdie.”

Her nearest challenger also enjoyed a great day with the putter. Simon turned in 33 with birdies at the second, fourth and seventh, and narrowly missed a four-footer at the 10th to draw level with Smit. She hit her second into the greenside bunker at the par-five 12th, but hit the long trap shot to 15 foot and holed the putt for birdie number four.

“I hit a lob-wedge to four feet at the next and holed the putt for birdie and at the par-three, hit a Rescue Four to 15 foot to set up another birdie,” Simon said.

Simon needed a strong finish and she delivered with a 25-footer for eagle at the par-five. “The course was there for the taking, because it wasn’t playing very long, and I knew a 64 would put me in contention,” she said.

“I am definitely happy with the round, because my game still needs some work. The putter was hot and I hardly missed any short ones, except the four-footer at 10 and a lip-out for birdie at 17.

“But Outeniqua is going to be a horse of a different colour, though. It’s bound to be tougher, but I’m looking forward to the challenge.”

England’s Rachel Drummond is the lone foreigner in the bus at one under alongside South Africans Iliska Verwey, Tijana Kraljevic, Nicole Garcia and Francesca Cuturi.