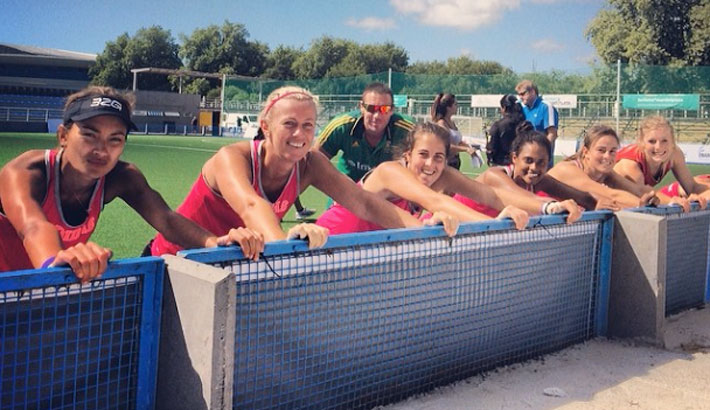 With eight-times World Player of the Year Luciana Aymar delivering a master-class in close control and intuitive running, world number two Argentina came back from a goal down to lead 3-1 at half-time, before running out 6-1 winners against the Investec South Africa women’s hockey team.

The encounter was the first of five Tests at Mar del Plata in Argentina on Saturday night (early Sunday morning, SA time), coming as coach Giles Bonnet prepares his squad for the upcoming Commonwealth Games in Glasgow from 24 July to 3 August, where his team has ambitions of repeating a much-coveted medal placing.

SA took the lead in the 14th minute when livewire runner Bernie Coston had a hand in setting up her team’s first penalty corner. Lisa Deetlefs timed her disguised shot/pass to the right-hand post to perfection and Candice Manuel, coming in at an angle, deflected home.

But Argentina, the reigning World Cup champions and London 2012 Olympic Games silver medallists, came back strongly with fine field goals from Carla Rebecchi, Daniela Sruoga and Delfina Merino, leaving SA with much to do after the changeover.

The umpiring did not help South Africa’s cause, but the Argentinians were the better side and did score some very good goals. SA had their chances, too but it wasn’t their night.

Argentina’s goals after the changeover came from a powerful Noel Barrionuevo penalty corner, then a wonder goal by Delfina Merino – and Aymar deserved getting on the scoresheet with the final strike of the night.

SA had some very good moments but Argentina had the edge in finesse when it mattered, and South African keeper Phume Mbande made a number of outstanding saves from full-blooded shots on goal.

Main photo caption: SA Investec’s Lisa Deetlefs made the most of SA’s first penalty corner against Argentina on Saturday, when her pass was neatly deflected by Candice Manuel to open scoring in the first of five Tests against the world no. 2 home side, at Mar del Plata. Argentina swiftly rejoined to lead 3-1 at half-time, an advantage converted to a 6-1 victory at full time. In this file photo, the Investec SA ladies are put through their warm-up drills ahead of the opening Test. Photo: The SA Women’s Hockey Team on Instagram