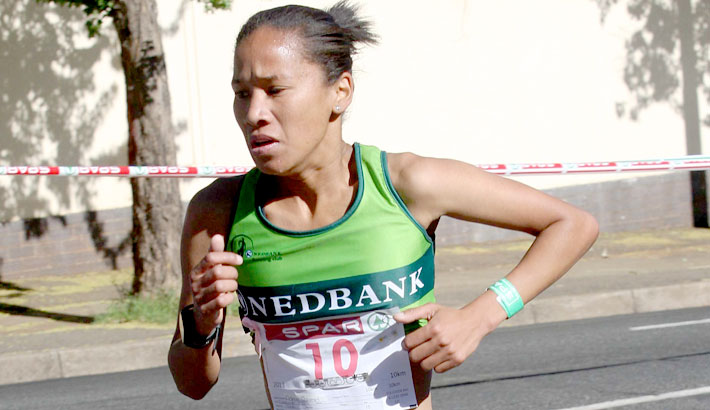 Nolene Conrad stunned the elite women’s field to secure her maiden national 10km title in 33:37 at the SA 10km Championships in Bloemfontein on Saturday, improving her personal best by 27 seconds.

Running in her new Boxer club colours, Conrad decimated her opposition to finish well ahead of Christine Kalmer, who was second in 34:20.

Defending champion Lebo Phalula took third place in 34:54, stepping on the podium for the fourth year in succession.

Conrad, a popular winner on social media, received many well wishes, including this one from SA women’s running icon, Elana Meyer:

Well done to @nolacon for being the SA champ for 10k's on the road, with a new PB! Good luck with next block of training for Debut marathon

Main photo caption: Nolene Conrad stunned the elite women’s field to secure her maiden national 10km title in 33:37 at the SA 10km Championships in Bloemfontein, improving her personal best by 27 seconds, on Saturday, 22 February, 2014. In this file photo, Conrad is pictured in Nedbank colours at the 2013 running of the Johannesburg leg of the SPAR 10km Challenge. Photo: Reg Caldecott