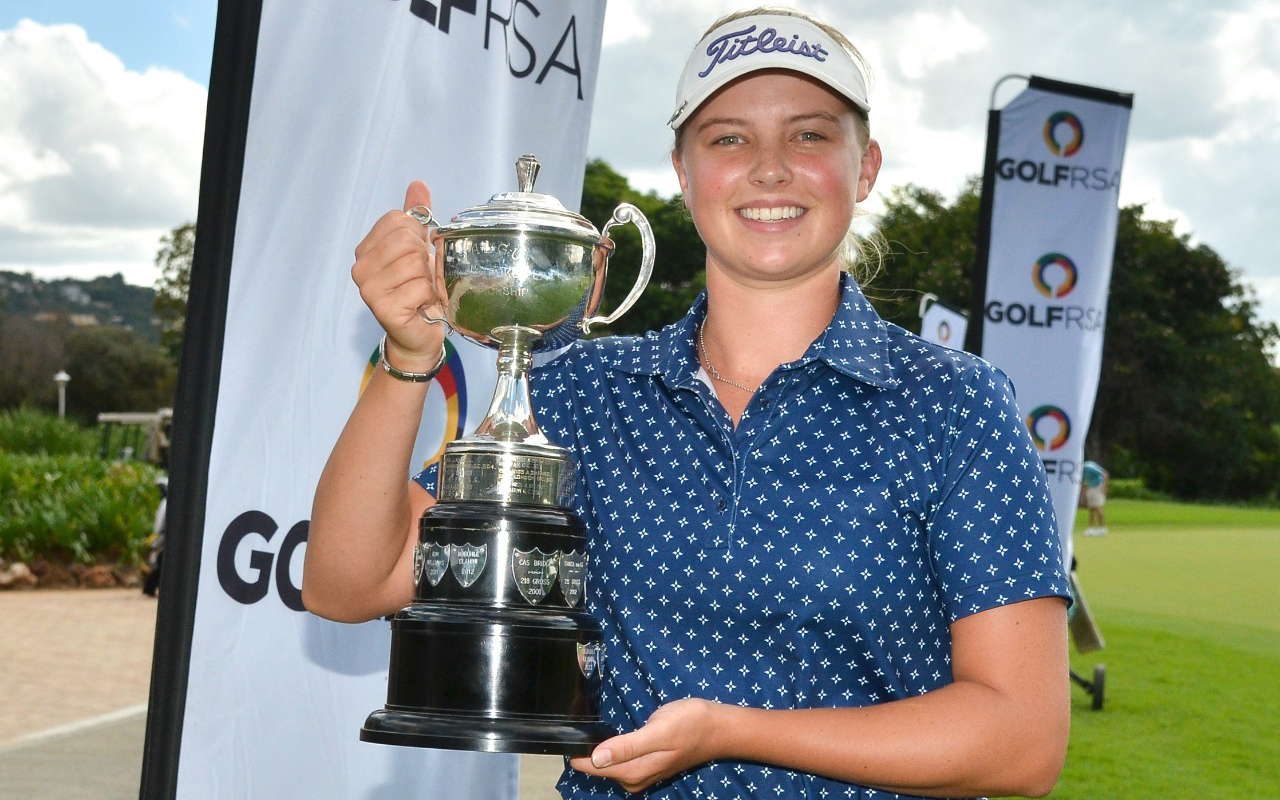 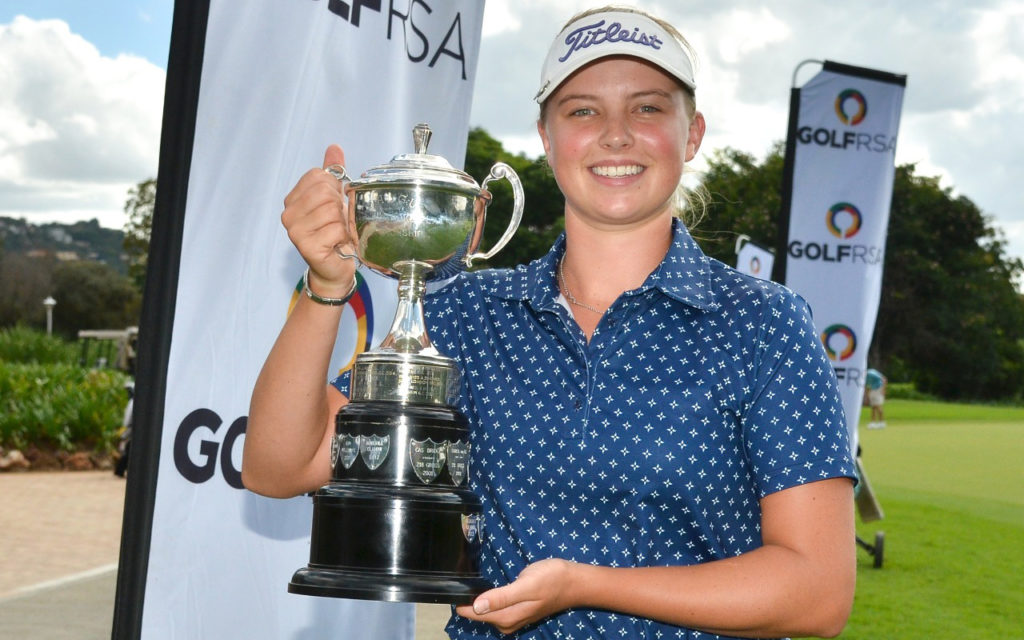 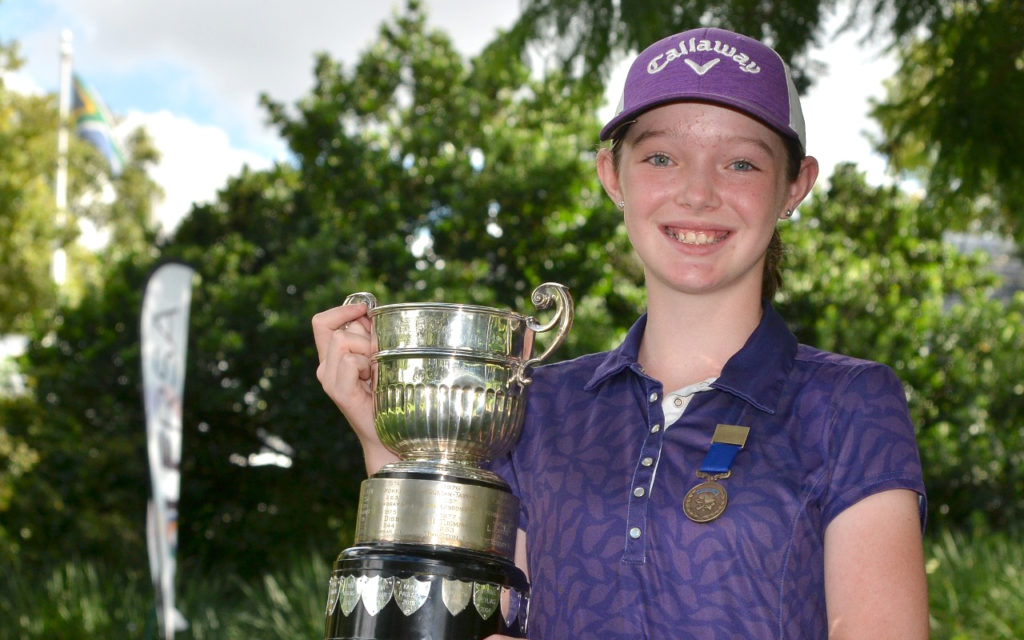 Swellendam’s Megan Streicher rode a red-hot putter to shoot the day’s low round of 67 on the West Course and rally from four shots back overnight to win the South African Women’s Stroke Play title at Royal Johannesburg & Kensington Golf Club on Tuesday, 16 February 2021.

Macnab had a chance to force a play-off with an eagle opportunity at the final hole of the West Course and gave it a valiant effort, but her putt died two feet from the hole. She had to settle for second after a closing 72.

GolfRSA No 4-ranked Nadia van der Westhuizen, who eagled the par-5 15th to join the race for glory, also registered a level par round to finish in third on two-under.

After successive rounds of 72 on the West and East Courses, Streicher put some time in on the driving range, but in the end, it was the flat-stick and her dad Barry on the bag that got all the credit for her first nationalsuccess.

“I didn’t strike the ball as well as I did over the first two rounds, but my putter was hot from the start.” – GolfRSA Elite Squad member, Megan Streicher

She got off the mark with back-to-back birdies and recovered from a bogey on the third with another gain on the fourth. A trio of birdies from the ninth moved her well clear of the pursuing pack, led by Macnab and Van der Westhuizen.

“I didn’t strike the ball as well as I did over the first two rounds, but my putter was hot from the start,” said Streicher, who is currently the country’s top-ranked junior.

“I made a lot of long birdie putts, and I sunk some lengthy putts to save par that kept my momentum going. I must give credit to my dad. He gave me some great lines on my putts and good advice and he kept me calm and focused throughout the round.”

Streicher now turns her attention to the match play component of the SA Amateur Championships, where she will tee off as the top seed in Wednesday’s first round on the West Course.

“I’ve been working extremely hard with my coach Murray Smit at De Zalze in Stellenbosch since golf reopened after lockdown,” she explained.

“I competed in the GolfRSA Boland Race to 2021 and started seeing some improvement.”

Two years ago a fresh-faced Streicher made the semi-final round in her debut in the Womens Golf South Africa flagship event, but last year she was eliminated in the first round. A solid third place finish in the season-opening Nomads Gauteng North Girls Championship in January shot Streicher to the summit of the junior rankings and set her up for a confident start in this year’s SA Amateur Championships.

“Last year was the first time I played here Royal Johannesburg and Kensington and I was so unprepared for these championship courses,” she said.

“This win really gives me a lot of confidence going into the match play. I’ll definitely be looking to go one further this week on two courses that I really love now.”

Her first match is against Lize−Mari Prinsloo from Mossel Bay, who carded 75 in the final round to clinch the final spot in the 32-strong field that will line in the Championship Division.

Meanwhile the Smits from KwaZulu-Natal is making this year’s event a family affair.

“We love playing and competing together, and it’s such a privilege to share this experience with my daughters.” – Former SA Mid-Amateur champion, Liezl Smit

Former SA Mid-Amateur champion Liezl Smit, who made her debut in the flagship events a full 30 years ago, will share the match play stage with daughters Anika and Marlie.

Smit and younger daughter Anika tied for 19th, while Marlie (joint 24th) goes up against overnight leader Samantha Whateley, who tied for sixth.

“We love playing and competing together, and it’s such a privilege to share this experience with my daughters,” said the pharmacist from Vryheid.

“If one of us falls out, we’ll support whoever is left. I love being able to do this with my daughters and to support their growth and development in the game. And I am still fiercely competitive myself.”

The Eagle Canyon junior will start the Flight Division in the No 1 spot, and faces Paola Sakota from ERPM Golf Club in the first round. Van der Vyver carded rounds of 95, 79 and 83 to edge out Casey Twidale on a winning score of 257. Umhlali’s Senayah Moodliar and Lea van der Merwe from Zwartkops shared third on 265.