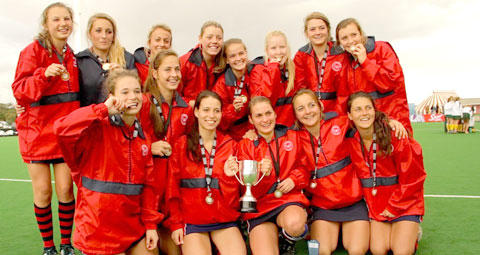 Led well by the Player of the Tournament, Natasha Rootenberg, Somerset College won the girls’ final of the Cape Town International Under-18 Schools’/Clubs Hockey Festival at Hartleyvale late Sunday afternoon, underlined their class with an emphatic 7-0 win over a spirited DF Malan after leading 3-0 at half-time.

Somerset’s seven goals came from a brace apiece by tournament leading goalscorers Megan Engelbrecht (tournament tally of 10) and Kaira Day (nine goals), as well as one goal each to Carly Rose, Savannah Burns and Tayla Senekal.

The semi-finals in the morning produced excitement and skill worthy of the final, and the girls of Somerset were made to work very hard by the determined Paarl Gim lasses to turn a 0-0 half-time score into a 2-0, victory thanks to field goals from Day and Hayley Walker.

The second girls’ semi-final was of equal value as DF Malan and Bloemhof slugged it out toe-to-toe in a clean yet highly competitive match, played with great passion and in a positive manner, the difference being Simone Strydom’s penalty corner winner in the 49th minute.