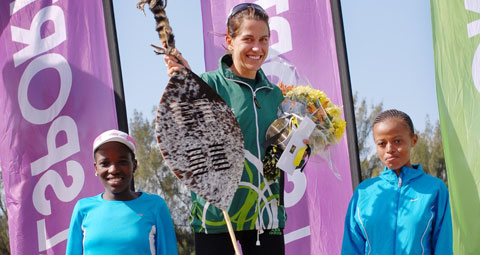 The streets of Durban were buzzing with activity on Sunday, 22 July 2012 when 4900 runners and walkers gathered at the Kings Park Athletic Stadium to participate in the much loved Totalsports Ladies Race in celebration of the upcoming Women’s Month.

Defending champion Rene Kalmer proved to be fighting fit on the day, sprinting to victory in an impressive time of 34 minutes and 21 seconds.

According to Kalmer windy conditions experienced on the day resulted in a tough race. “Today’s race was difficult. The wind was really strong at the start, while the route itself featured quite a lot of turns. It is always nice taking part in Durban though, and I always enjoy the race as it is about the ladies,” said Kalmer after her victory.

“There was a really nice vibe at the start of the race and this continued on route. The support on route was just as nice. After today’s race I am really confident about the Olympics. I must admit what started out as excitement has now turned to a little stress,” she laughs.

Rene Kalmer departs for London on Tuesday, 24 July 2012 where she will represent South Africa at the Olympic Games in the marathon on Sunday, 05 August 2012.

The Totalsports Ladies Race heads to Johannesburg and Stellenbosch where it will continue its Women’s Day celebration on Thursday, 09 August 2012.