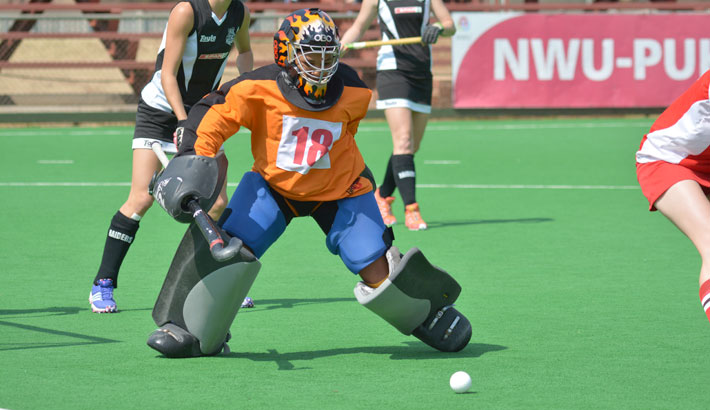 Southern Gauteng and Western Province Line Up for Hockey Honours

Lining up for the final in the elite A Section of the SA Women’s Interprovincial Hockey Tournament (IPT) at North-West University in Potchefstroom Saturday afternoon will be the country’s hockey heavyweights, Southern Gauteng and Western Province.

Southern Gauteng, arguably the most impressive side so far, accounted for defending champions Northern Blues 5-1 while WP edged Free State 2-1.

Nine of the Southerns players as well as head coach Rob van Ginkel will be gunning for their third prestigious title of the year, having already won the Varsity Cup and University Sport SA titles in University of Johannesburg colours.

The first semi-final belonged to Southerns throughout. Into the second minute Lisa Hawker made an incisive run along the right-hand baseline before drawing the defence, flicking across to captain Bernie Coston who tapped the ball in from close (1-0).

In the fifth, there was more Southerns joy when Catherine McNulty’s pressure allowed Shelley Russell to tap the ball into the backboard (2-0).

At the other end Southerns goalkeeper Sanani Mangisa was assured in dealing with any danger that came her way.

The Johannesburg girls went 3-0 ahead in the 25th, just five minutes from half-time, when Kristen Paton broke through tackles in the nine-yard area.

A minute from half-time Blues had a rare opportunity – from the semi-final’s first penalty corner – but the chance came to naught.

After the changeover Southerns maintained the pressure and made it 4-0 in the 42nd minute from their third PC, the ball injected to the second of two castles at the top of the strike zone, and Carmen Smith cracked the ball home.

The goal of the match came six minutes later (48th) when the fleet-footed Sylvia Horstmann intercepted on the halfway line, raced down the right channel and crossed to Toni Marks, whose shot towards goal was glanced in by Coston (5-0).

With seven minutes left (53rd) Northerns pulled one back when captain Nicolene Terblanche created the opportunity for Dirkie Chamberlain to finish clinically (5-1). But it was last year’s bronze medallists Southerns who had the last say in what was an outstanding victory against the defending champs.

The second semi-final saw WP twice denied in the opening seven minutes by Free State keeper Beatrix Westdyk as the girls from Bloemfontein went in search of their first final in 28 years.

Free State have never won the IPT title while multiple winners WP had a host of players who have been in semi-finals and finals before.

In the 12th, Nicole de Vries shot wide of the far post following WP’s second PC and the first quarter ended with the score 0-0.

Two minutes into the second quarter the young Free State side were dealt a massive blow when a collision resulted in the experienced Mignon van Tonder having to be stretchered off.

With WP striker Taryn Glasby a constant headache down the right flank, Free State were consistently under pressure but the score remained 0-0 at half-time.

The semi-final broke wide open one minute into the second half (31st minute) when Izelle Lategan got the deflection off Cornelle Botha’s hit into the strike zone. WP struck back almost immediately (33rd minute) with a beautifully taken deflection goal by Megan Robertson off a PC (1-1).

The action flew from end to end in this frenetic third quarter but the score remained 1-1 as the teams went into the last 15 minutes.

Both sides created chances but with seven minutes left (53rd) Free State’s brave bid for the final was dealt a major blow when a cross from the right by Taryn Glasby was steered over the goalline by Heather McEwan for what was the 2-1 scoreline at full-time.

In the first round of playoffs for fifth to eighth places, Spar KZN Raiders played a superb first half in accounting for Border 7-0, all the goals coming before the changeover.

In the other playoff North West beat a determined South Gauteng Wits 3-1 after leading 1-0 at half-time, the goals coming from Lenthea Kamffer, Celia Evans and Steph Baxter, while the Wits goal was scored by Luche Klaasen from the penalty spot.

Saturday’s A Section classification matches see Border against SG Wits for seventh and eighth places at 09h30 followed by the showdown for fifth and sixth places between Spar KZN Raiders and North West at 11h30. The playoff for third and fourth places between Northern Blues and Free State is at 13h30 while the Southerns/WP final is at 15h30.

The second-tier B Section, a nine-team tournament is played in a round-robin format with no semi-finals or final. It’s a close race for first place between Namibia and WP Peninsula.

Results at the SA Women’s Hockey IPT in Potchefstroom, on Friday, 28 August, 2015: