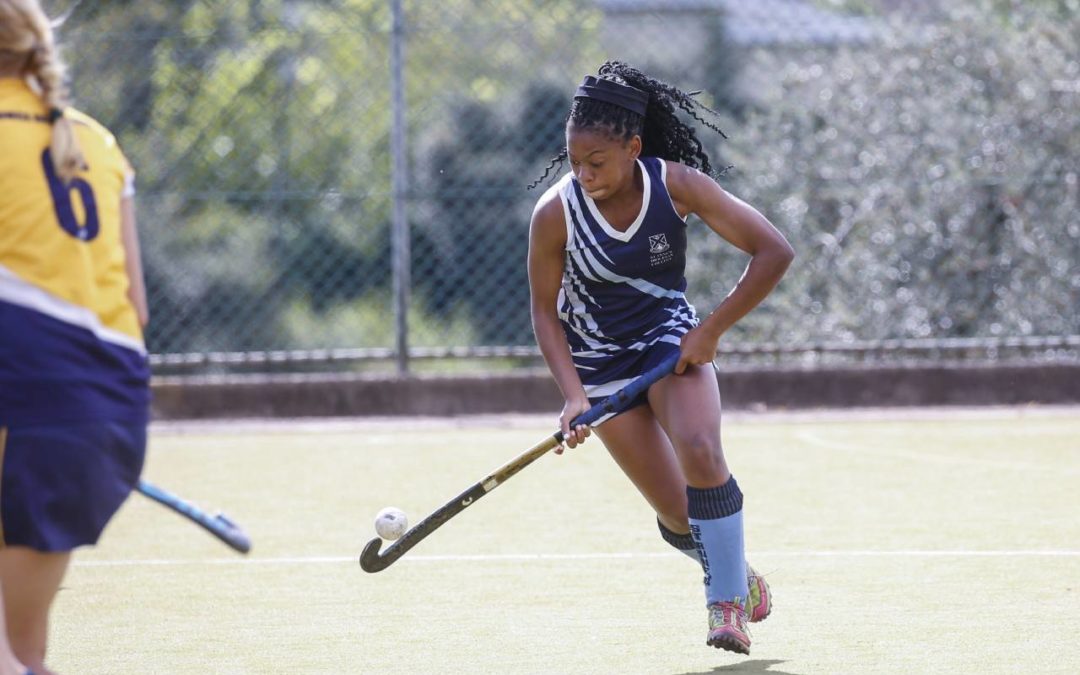 On Saturday 14 March 2020, two more teams earned places at the Grand Finals of the SPAR KZN Schoolgirls’ Hockey Challenge. First to secure their place was host school, St Anne’s College who were victorious in the Pietermaritzburg Northern Regional followed by Epworth School in the Pietermaritzburg Central Regional.
In a repeat of their round robin clash, St Anne’s met Howick High School in a 7-nil victory for the Pietermaritzburg North title. The two teams faced each other in their first game of their regionals. Howick High then knuckled down and dusted off their loss, going up against Voortrekker High School and Grace College.
Howick ran out of steam after playing a pearler against one-time winner, The Wykeham Collegiate in the last game of the round robin. Howick defended like pros letting in an early Wykeham goal, midway through the round robin game, they had an opportunity down the other side which they made sure they knocked in to equalize. The remainder of the game they held strong, not allowing Wykeham any space giving them a chance to have a run in the final against St Anne’s.
St Anne’s opened their account with a spin and slot in from Lusanda Mtshali, who netted the first with less than 2 minutes on the clock. Racking up the goals after Mtshali started the ball rolling, Gabbi Benkenstein scored two, Storm Veenstra added one to her teams tally and Georgie Romer-Lee knocked in a magnificent hat-trick of goals.
In the Central Regional, Epworth kept a clean sheet in their six games. The second team to make it to the regional final was decided on goal difference. Both Pietermaritzburg Girls’ High and St John’s D.S.G. had near-mirror image results. With wins for both against Russel High School, Alexandra High School and Carter High School. Both went down to Epworth 1 nil and drew nil nil in the game against each other. The goal difference was the decider with Girls’ High netting a total of 21 goals and St John’s 20.
In the second Epworth Girls’ High game, Epworth owned the territory with 90% of play taking place in the Girls’ High half. Epworth preserved with their attacks throughout the twenty minutes but the last line of defence, keeper Manelisi Gwala was defiant. Deflecting missiled flicks from short corners, warding away rockets with magnificent soccer skills, she held strong.
In a last gasp attack, Epworth’s Fia de Bruyn hugged the post as she deflected the ball from a determined pass from the right. On the whistle, Epworth managed to win the game and the regional title for the third time. The defending champs reactions were electric amid a brewing electric storm above.
Two umpires were acknowledged for their determined efforts with the whistle throughout the day, Solulwe Bless from the Central Regional and Lorimer O’Bree from Howick High for North Regional.
RESULTS:
Pietermaritzburg Northern Regional
1 St Anne’s College, 2 Howick High School, 3 The Wykeham Collegiate, 4 Voortrekker High School, 5 Grace College
Pietermaritzburg Central Regional
1 Epworth School, 2 Pietermaritzburg Girls’ High, 3 St John’s D.S.G., 4 Carter High School, 5 Alexandra High School, 6 Russel High School, 7 Maritzburg Christian School
Photo 1 Caption: St Anne’s College’s striker Lusanda Mtshali confidently picks up the ball during the Pietermaritzburg North Regionals of the SPAR KZN Schoolgirls’ Hockey Challenge that took place St Anne’s College in Hilton on Saturday 14 March. St Anne’s won 7-0 against Howick High School in the finals. Photo: Rogan Ward
Photo 2 Caption: Epworth School’s vice captain Yasmin De Meyer takes a hard shot at goals with Pietermaritzburg Girls’ High School’s Danielle Hamilton (left) Siphumelele Shandu (right) in defence during the Pietermaritzburg Central Regionals of the SPAR KZN Schoolgirls’ Hockey Challenge that took place St Anne’s College in Hilton on Saturday 14 March.  Photo: Rogan Ward
With editing by gsport