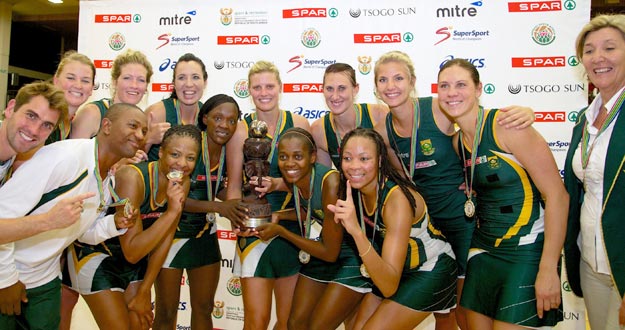 In an incredible spectacle of international netball, the SPAR Proteas cracked third ranked England in the final match of the tri-nations being played in Port Elizabeth.

In an almost goal for goal game, the Proteas fought their way into the lead, to end the game 39-37.

Going into tonight’s game to give it all they had, the Proteas came out fighting. With the loud and encouraging support of the South African crowd, the determined team in green and gold did their country proud.

Both teams started strong, with solid combinations in defence and attack. England’s starting line-up included the feisty Serena Guthrie on centre, supported by the ruthless Stacey Francis on goal defence. However, as much as the South African side wasn’t rattled and held their ground, they were let down by some loose passes, and a lack of confidence under the posts, and trailed 8-10 to England at the end of the first quarter.

Simnikiwe Mdaka replaced Lindie Lombard on wing attack in the second quarter, to bring in some more speed, and Kotze made no further changes to her team for the rest of the game.

By contrast, England coach Ana Mayes made several as the game progressed, and the intensity increased.

Mdaka made a visible difference to the Proteas drive into their goal circle, and the defence combination of Karla Mostert and Adele Niemand was unbreakable.

Niemand had a phenomenal game, and was later named ‘Vital’ Player of the Match. After a number of intercepts, South Africa managed to narrow the gap to end half time only one goal behind at 19-18.

It was the second half of the game that showed the true fight of the South African team.

Despite allowing England to get ahead by a four-goal lead within the first two minutes, the Proteas showed resilience and control. The England side made a few unforced errors, and the South African side managed to capitalise on them to push themselves into the lead for the first time in the game.

The whistle blew with South Africa ahead by 31 goals to England’s 30.

It was in the fourth quarter that the England side looked rattled for the first time in the series. The Proteas ran ahead with a four goal lead as Kadeen Corbin missed a few shots, forcing Mayes to replace her with Rachel Dunn.

Some back-and-forth play and the goal difference squeezed tighter, then finally the clock stopped and the Proteas had defeated netball powerhouse 39-37, to win the series.

“I am a very proud coach tonight,” said Proteas coach Elize Kotze after the game. “We worked as a unit for the first time tonight, and these players have showed that they are ready to step up to the next level.”

“It was a true test of character, and they have proved themselves as role models for young girls in the country.”

The Tri-Nations will be followed by the Diamond Challenge, also taking place at the Nelson Mandela Metropolitan University Indoor Sport Centre in Port Elizabeth. The first match will be played on Sunday 27th October 2011.