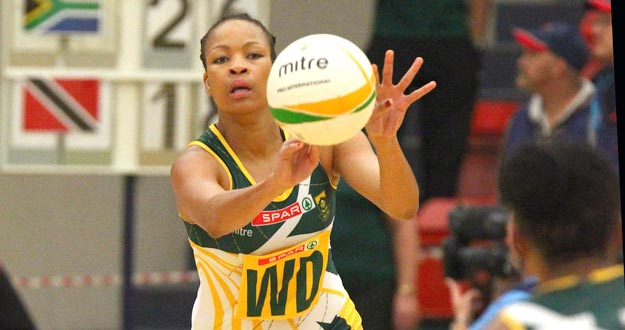 The SPAR Proteas managed to overcome setbacks in a rough and tumble match to beat Trinidad and Tobago 47-30 in the opening encounter of the netball tri-nations tournament, at the Nelson Mandela Metropolitan University Indoor Sport Centre in Port Elizabeth on Tuesday evening.

Off to a very slow start, the Proteas struggled to get into a rhythm, which could be contributed to the heavily physical style of play from the Caribbean team. However, they were able to find some good spaces between the Trinidad and Tobago team, who preferred to play a more static and direct game.

South Africa’s defence were on top form, as the combination of Karla Mostert and Adele Niemand created a number of increased opportunities due to some great intercepts. The Proteas led at the end of the first quarter by 11 goals to 7.

Play in the second quarter started to pick up some speed, but the rhythm was lost again as Chrisna Bootha had to leave the court due to injury from contact by her opponent goal keeper Alicia Liverpool.

South Africa then scored a few consecutive goals to widen the goal difference, before Melissa Myburgh, Bootha’s substitute, was thrown to the ground and had to be taken off by stretcher, forcing coach Elize Kotze to try out her last resort shooting combinations.

The young Lindie Lombard took up role as shooter, whilst Bongiwe Msomi moved to wing attack and Simnikiwe Mdaka came back on as centre. The half time whistle blew with the Proteas leading 25-15.

With big boots to fill, Lindie Lombard stepped up to the plate, holding her own in the goal circle, which ultimately scored her the prize of ‘player of the match’. “Lindie maintained her ground, with her feet firmly in the circle” said Kotze after the match.

Relying on the support of goal attack Maryka Holtzhausen, who had some brilliant long shots; the attack combinations started to gain confidence, passing balls smoothly down the line. The second half of the game gained intensity as the clock ticked and the Trinidad and Tobago team picked up the pace, making a number of errors.

By the end of the final whistle the Proteas had outscored Trinidad and Tobago by 47 goals to 30.

“Losing both our shooters so early in the game threw us off,” said Elize Kotze after the match, “and I am a bit worried about our intensity, but we have seen which combinations will work for us to start with tomorrow, and that has been very helpful.”

The Proteas will take on England in Wednesday’s game, at 17h30. The match will be broadcast live on SuperSport Channel 229.