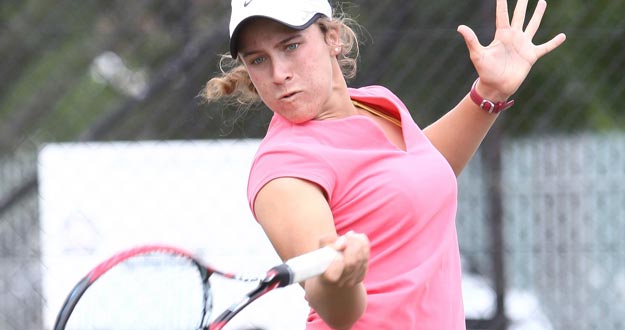 The tournament’s fourth-seeded Huibre-Mare Botes was the only seed to fall in the second round, when she was overpowered 6-3 6-1 by the USA’s Rachel Papavasilopoulos, while her sister Louise-Mare Botes maintained national and family pride to beat the Netherlands’ Barbara Huyskes 6-3 6-4.

For Poluta, a tough, gritty 16-year-old who is based at the Atlantic Tennis Academy in Table View, it was sweet revenge because she lost to Birkenstock when they first met in East London some 18 months ago.

Poluta started off poorly, dropping serve in her opening but she remained unbowed and fought back bravely to take the set 7-5.

She stormed ahead 5-3 in the second set but then dropped serve and Birkenstock, who hails from KZN, was able to level at 5-5.

In subsequent games, both held serve and in the resultant tie-break Poluta proved the stronger of the two, and she was on her way to Wednesday’s quarterfinal round.

In the doubles fixtures, seeded pairs 2-Vanja Klaric (Srb)/Rikeetha Pereira (Ind) and 1-Nicole Dzenga (Zim)/Marli van Heerden stayed on course to meet each other in the final.

In Monday’s action, the eighth-seeded Vanja Klaric survived a first-set scare to defeat Minette van Vreden 6-7(1) 6-0 6-1 in their opening round singles match.

Klaric, a Serbian national who has been based at the Riaan Venter Tennis Academy at the North-West University of Potchefstroom for just over nine months, relied heavily on solid ground strokes to regain the initiative after the Bolander Van Vreden threatened to take the game away from her by winning the opening set.

Van Vreden’s all-court game forced Klaric to settle for a basic game in which the intention was merely to keep the ball in play. The two know each other’s game well since they met in the quarterfinals last week when Klaric scored a 6-1 6-1 runaway win.

“With Minette you can’t score easily because she’s equally good on both sides of the court,” said Klaric. “I realised after losing the first set that the best plan was to simply get the ball back to her, and wait for her to make errors.

“My ground strokes and serve started working well from the second set onwards, and then I knew it was all a matter on consistency if I had to recover from the first-set loss.

“When she served I made up my mind to simply get my returns in and that’s the way I managed to stay in the game in the last two sets.

“Minette’s not an easy opponent and if you don’t get on top of your game quick enough she doesn’t give you a chance to fight back.”

On the neighbouring court, Maxine Bateman of KwaZulu-Natal caused the upset of the day by defeating third seeded Zimbabwean Nicole Dzenga 6-4 7-5 in a fiercely-fought contest.

Bateman’s victory meant she went one step better than last week when she was a first-round loser courtesy of Turkey’s Mina Karamercan. For Dzenga, the defeat was a continuation of a slump that saw her fail to progress beyond last week’s first round.