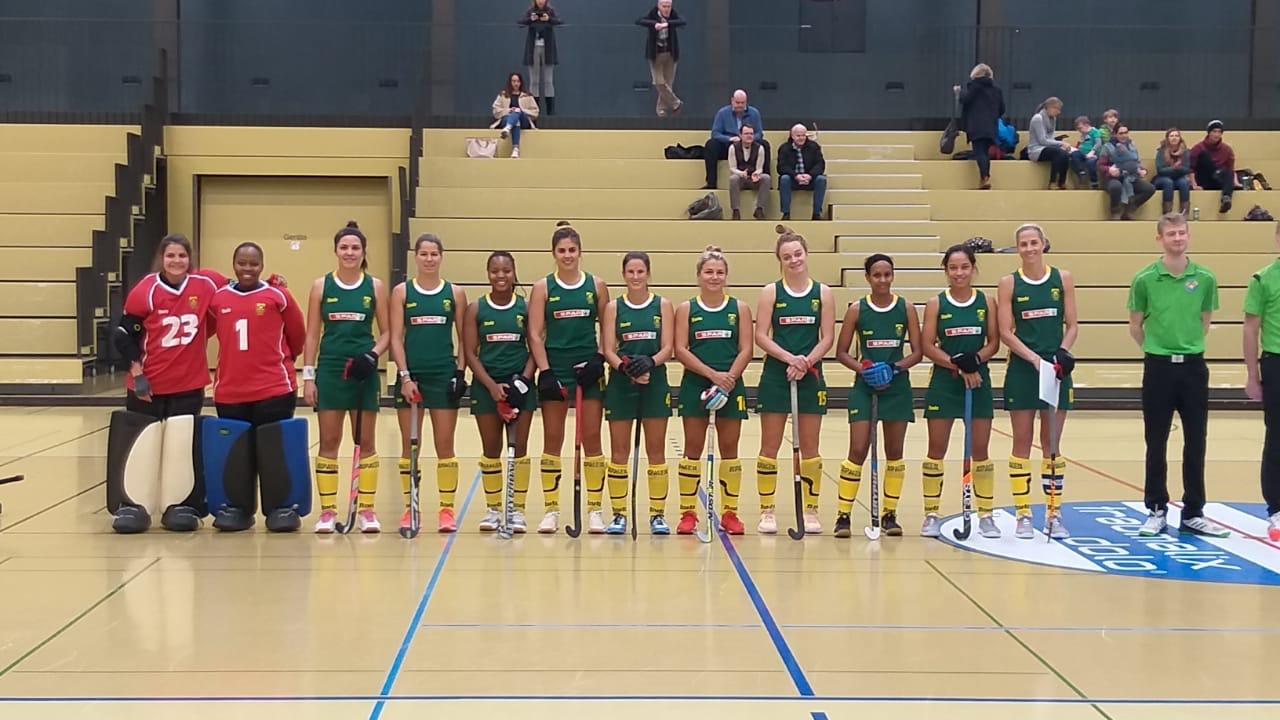 SPAR South Africa take control of the series against Switzerland

It was a tough day for SPAR South Africa both physically and emotionally, but as this team has proven time and time again, that is when they show their best side. Today was the day that the former South African player Brenda Bartlett was remembered after her long fight with cancer. For South African captain Cindy Hack, it was extra emotional as the two played together at the 2007 Indoor Hockey World Cup and were fond friends.

The South African ladies wore black ribbons on their socks to play in honour of the late Bartlett and found themselves under early attack. The Switzerland side featured a few changes from the opening test match and the renewed energy provided a massive test for the South Africans with Julia Intelmann converting the early pressure.

The hosts, who were stunned in the opening game, looked up for the game but SPAR South Africa were given an early lifeline when they won a stroke. Tegan Fourie dispatched it convincingly to restore parity in a fierce contest. With the clock ticking to half-time it was the visitors who took the opportunity and netted a fine go-ahead goal through 18-year-old sensation Edith Molikoe. The youngster had a fantastic first test and the goal was a just reward for her displays.

In the second half captain Cindy Hack extended the lead to 3-1 with her 3rd of the series, which drew obvious emotion from the inspiring leader. Switzerland set up an incredible finish win they scored in the 35th minute through Sofie Stomps. Although they threw everything at it, the hosts were unable to breach the South African defence and suffered a second surprise defeat.

As is the nature of indoor hockey there was not much time to wait for the third test, in fact just about 7 hours. The two teams had produced a fantastic and entertaining test match in the morning and although Switzerland rang the changes again, it was more of the same for the crowd in attendance.

It was South Africa who got the perfect start to the game with a superb Jessica O’Connor flick from the penalty corner. Although coach Lennie Botha was delighted with that early goal, that delight did not last long as Elena Trosch levelled in the 10th minute. Hasana El Allaly then sent the home crowd into raptures as the hosts gained the lead. It looked like it was a lead that would last until half-time, but after the hooter Jess Lardant scored from the penalty corner to completely tear up the respective coaches’ notes.

As has become customary in this series, the first goal of the second half was struck by legendary captain Cindy Hack, her fourth of the series, putting SPAR South Africa into the lead. A defensive masterclass looked like it had done enough to seal the series for South Africa, but a last second penalty corner was converted by Janice Thoma to share the game. A pulsating 3-3 draw that extended South Africa’s unbeaten test match run to 28 games and importantly meaning they cannot lose the series with two matches remaining. It’s nothing short of spectacular for the world’s 16th ranked side against the World number 7.