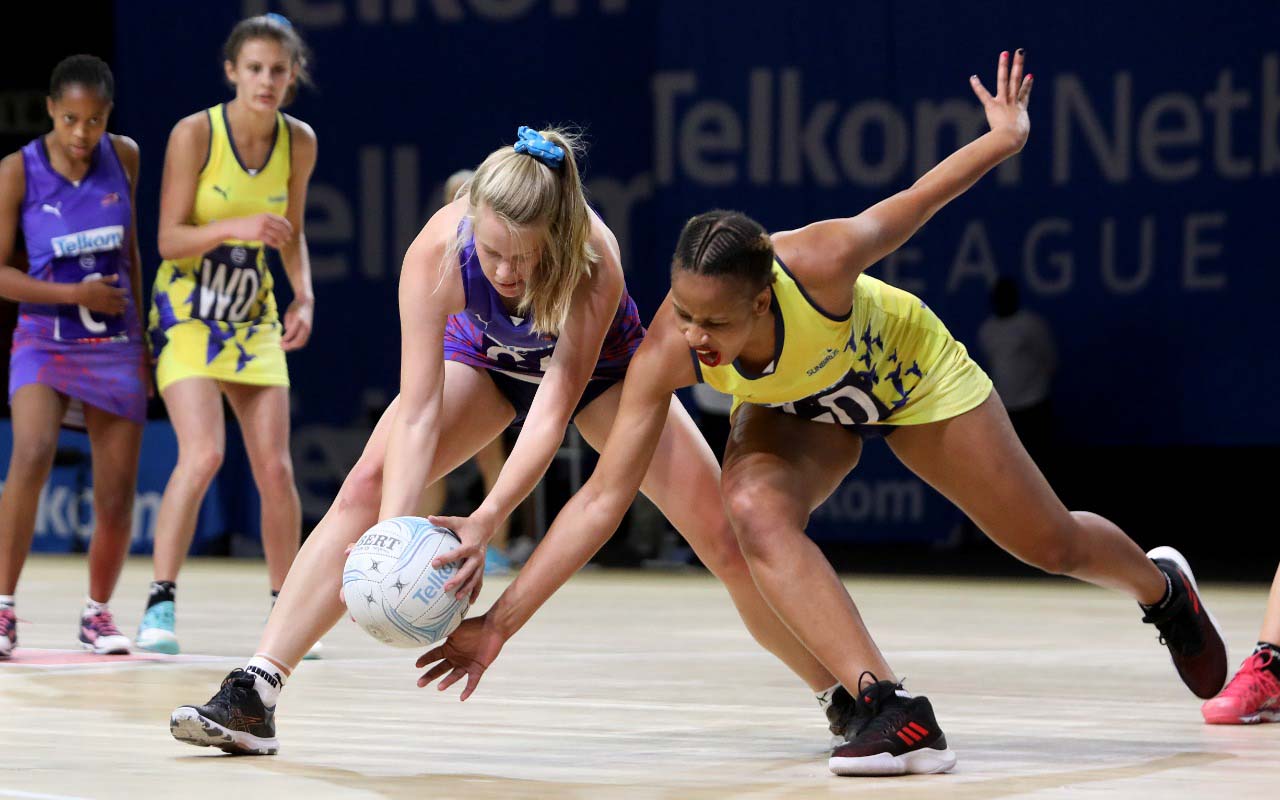 The Gauteng Jaguars sustained their first defeat since 2019 after being beaten 45-43 by Southern Stings in the Telkom Netball League in Rustenburg on Thursday, 14 October 2021.

Going into the match, both teams had met sixteen times with Jaguars winning twelve of those games and Stings claiming three wins.

Stings’ defensive trio of Nicola Smith, Mandolene Hermanus and Stephanie Brandt were effective in creating turnover balls and their efforts were smoothly rewarded by the shooters, Nichole Taljaard and Danelle Lochner who boasted a combined eighty seven percent shooting average.

Stings’ coach, Annelie Lucas, relied on the same starting seven to carry out the task for the first three quarters and only made one change in the final quarter.

“We are one of the teams that are able to give Jaguars a run and the way my ladies are playing, they deserve to be in the final, but they need to show us that they want to be there by playing on court,” said Lucas.

“We will focus on Crinums; I’ll have a close look at them because I never underestimate them. They are such a versatile team and there is always something up their sleeves,” she concluded.

Baobabs were leading in the first three quarters, but the tables changed in the last quarter when Goalkeeper and captain, Nthabiseng Mothutsi and Center, Shongile Hlungwana went off. Sunbirds took advantage of the missing links from their opponent’s side and increased their conversion rate to win the game by a narrow three goals.

Sunbirds’ captain, Maryke Coetzee says the team had to remind themselves that they are here to compete, “The first two quarters were really not nice and the spirit in the team wasn’t good at all.

“At half-time were we like, this is it and all of sudden there was just a switch in each and every player that took to court,” said Coetzee “They gave their everything, even though we were still trailing in the third quarter, but we managed to close the gap and in the fourth quarter, we just pulled through.”

Fireballs displayed a brave performance against Crinums, but their efforts didn’t yield any positive results after losing 43-40.

This was Fireballs’ eighth defeat in the group stages, but the Gauteng side have another opportunity to finish off on a high when they go up against Flames in the playoff match on Friday, 15 October 2021.

A tough encounter awaits the Crinums as they will be up against a boisterous Stings side who caused the biggest upset in the tournament so far after beating Jaguars.

An even contest between Tornados and Comets went in favour of Tornados following a slim 43-40 victory.

Comets missed out on a spot in the semi-finals, meanwhile Tornados have set up a last four clash with Mpumalanga Sunbirds who finished fourth after beating Limpopo Baobabs earlier this morning. The Comets will now battle it out in the 5th/6th playoff match against Diamonds.

Tornados’ coach Danlee Mathews believes her team have what it takes to do well against Baobabs, “The two previous loses this week hit the girls very hard and I think that was the best thing to happen to them because now they understand what they need to do as a team in order to perform.

“Tomorrow is going to be a tough game and the Sunbirds know mentally that they can beat us, but you’ll never know with the Tornados,” said Mathews “I’m one hundred percent sure that they will step up tomorrow and play the type of netball that I know they can play because they hungry to perform.”

Kingdom Stars have a mountain to climb as they will be up against Jaguars in the first division one semi-final.

Stars had a field day against Flames after beating them 54-34. The KZN team has improved tremendously compared to last year’s edition where they lost all their round robin games under coach, Boniswa Thabethe.

Photo 1 Caption: Zanneke Ras of Baobabs in contention for the ball with Tumelo Nkoe of the Sunbirds during the last round robin match of the Telkom Netball League. Photo: Supplied