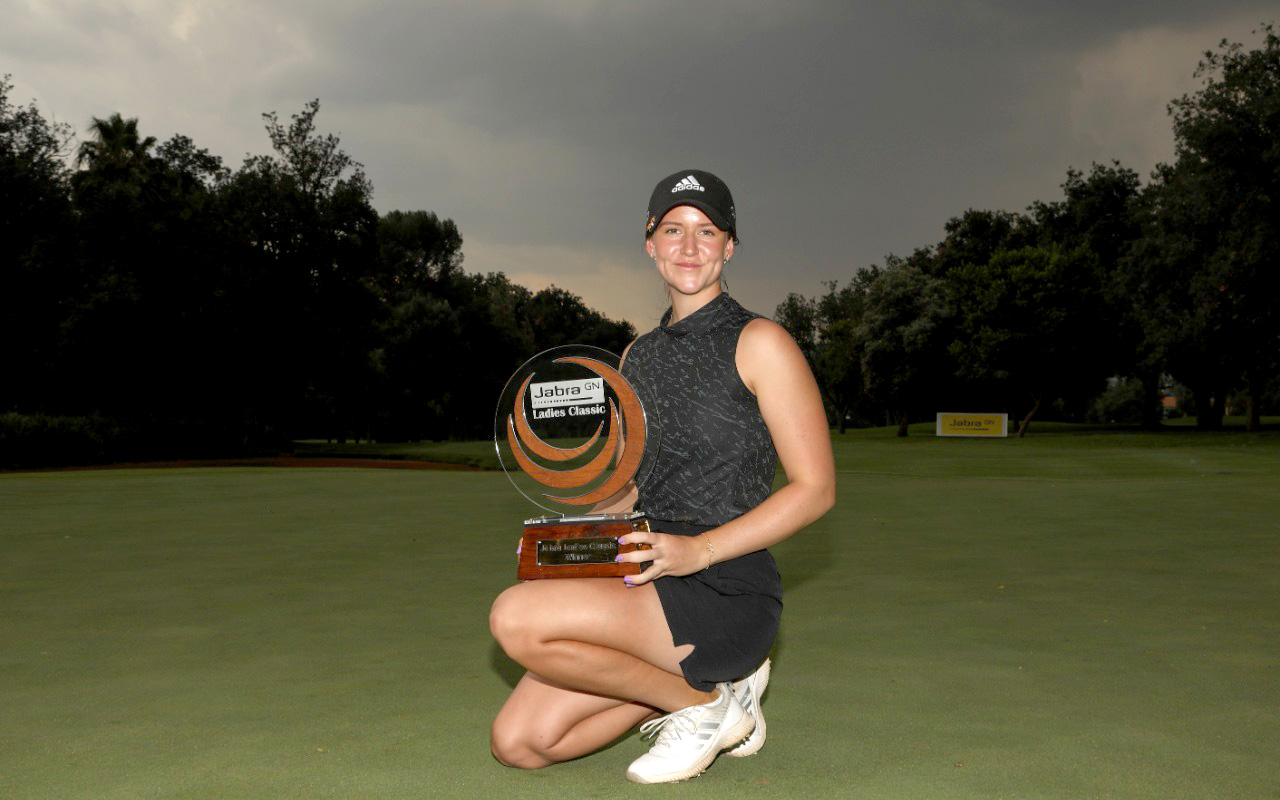 Linn Grant of Sweden turned it all on at Glendower Golf Club as she carded a superb seven-under-par 65 to pull clear for a two-stroke victory in the R1-million Jabra Ladies Classic on Friday, 25 February 2022.

Grant is certainly taking the Sunshine Ladies Tour tagline “Level Up” to heart, as this marked her second visit to the winner’s circle in her debut season, after she celebrated a maiden pro win in the Dimension Data Ladies Challenge at Fancourt a fortnight ago.

In the end, it was a bit of a race against time as the leaders cranked up the pace of play – as well as the quality – to beat in incoming highveld thunder storm. It took a buggy ride to their tees shots to play their approaches as quickly as possible.

Grant made two birdies in the final four holes in response to Paul Reto’s three birdies in three from the 13th to the 15th, and, when Reto bogeyed the 16th, the Swede took the gap and stretched out for the win

“We rushed on the 18th because we knew there was a storm coming in and we had been told we had 15 minutes or half an hour to make it in,” said Grant. “That was a little stressful.”

In fact, she felt things were stressful for most of the closing stretch as she did battle with Reto who had won so handily last week at Sun City. “I was very nervous, like for the last five holes,” said Grant. “I knew that we were tied for the lead for much of the time, and Paula holed a very long putt on 13, which tied it up again, so I was nervous, but it was fun too.”

It was a bogey-free effort for Grant, who turned in three-under 33 to move to six-under for the tournament, level with overnight leader Reto who turned in one-under 35.

Just before the turn, Grant had begun to apply the pressure with two of her birdies on that front nine coming on seven and eight. She put pedal to the metal after the turn with two successive birdies pulling her clear, while Reto made just pars after the turn.

Then came Reto’s run from 13 to 15, which drew her level after the 14th, and exchanged birdies on 15 kept them locked up at nine-under.

But once Reto made her bogey, Grant was able to close things out, denying the LPGA Tour player a double victory after her SuperSport Ladies Challenge success at Sun City last week.

Nobuhle Dlamini of Swaziland finished with a two-under-par 70 to be third on four-under, and Casandra Alexander endured a frustrating final round during which she birdied just one of the par-fives on her way to a three-under, and a share of third at three-under with reigning Investec South African Women’s Open champion Lee-Anne Pace.

For Grant, her South African campaign has been a vindication of hard work and of the decision to play here before launching herself on the Ladies European Tour.

“It’s been good, and I’ve seen that my game is headed in the right direction,” said 2021 Arizona State graduate. “One thing I’ve learned, especially from today, is that regardless of where you play, the competition against yourself kind of gets into your head a little bit and dealing with that well helps a lot.”

The Swede is taking a week off to explore the attractions in Cape Town before she returns to Fancourt to prepare for the two upcoming tournaments co-sanctioned with the Ladies European Tour – the €250 000 Joburg Ladies Open at Modderfontein Golf Club from 24 – 26 March, and the season-finale Investec South African Women’s Open in Cape Town.