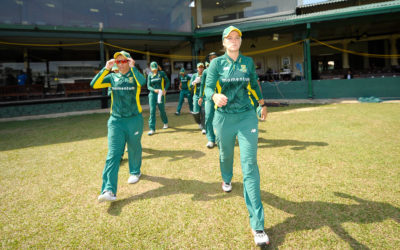 Just One More Thing after Momentum Proteas Finish the Job

The Momentum Proteas have excelled to earn entry to the ICC Women’s World Cup in June, but must first face the Qualifier tournament leaders India in the series final on Tuesday

West Indies beat the Proteas by two wickets in their opening Super Sixes match, dashing SA’s hopes of reaching the final, but Mignon du Preez and her charges are still eyeing a top four finish in the ICC Women’s World Cup 2013 in India.

One Last Chance for Momentum Proteas

Despite a brave effort, the Momentum Proteas went down to Australia in Cuttack on Sunday to record their second loss at the ICC Women’s Cricket World Cup 2013. The Proteas need to beat Pakistan on Tuesday to advance to the Super Sixes.

Weekend Wrap: Check out our summary of SA women’s sport published on gsport over the weekend!

Boland Stretched But Keep on Winning

Boland Cricket is enjoying a run of good form, but were made to sweat for the first time to consolidate their advantage at the top of the domestic women’s premier Super Sixes league when they visited KwaZulu-Natal at the Chatsworth Oval, in Durban on Saturday.

Nathanael Christiaans gives the ball plenty of flight during her 100th first-class match for Boland during the weekend, taking two wickets in her team’s demolition of Free State in Kraaifontein. Picture courtesy Liam McAvoy Boland made sure to confirm their top-of-the-log position in the second round of the premier Super Sixes competition against the Free […]