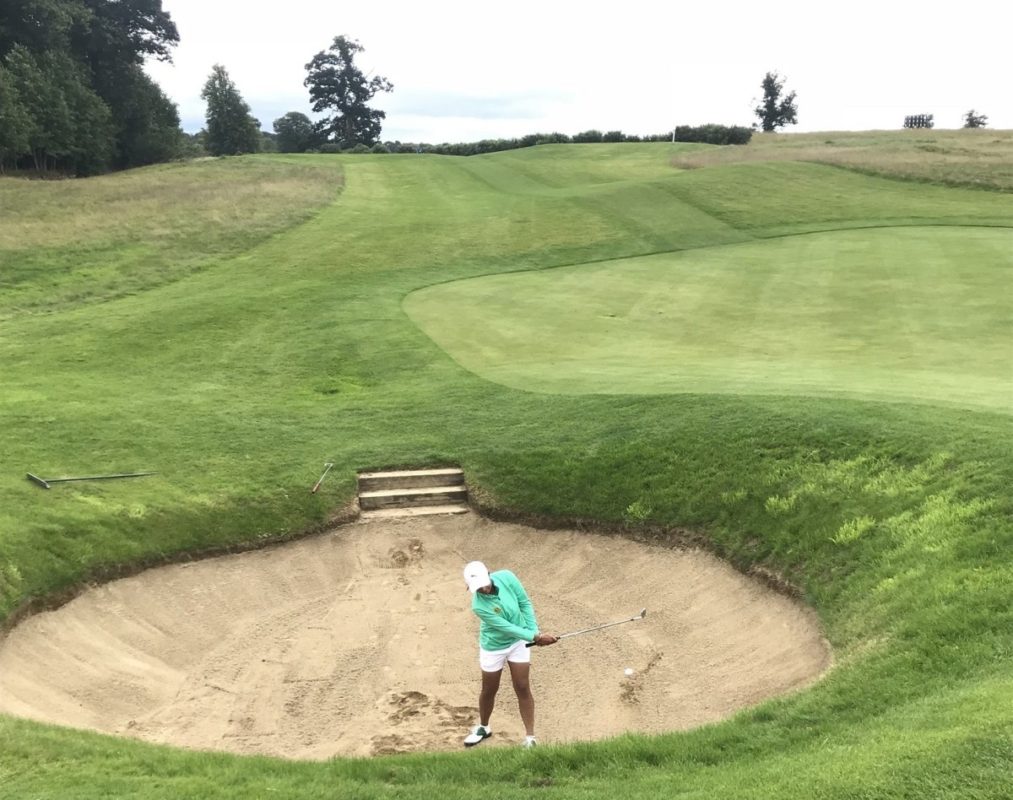 MAYNOOTH, Ireland (1 September 2018) – They promised to make the most of moving day at the World Amateur Team Championships, and thanks to a sublime effort from Caitlyn Macnab and Kaleigh Telfer, Team South Africa will start today’s final round of the Espirito Santo Trophy in joint 20th at Carton House in Ireland.

On a windy day at Carton House, the USA posted a third round 143 to extend its lead over defending champion Republic of Korea and six over Japan on a 54-hole score of 19-under 415.

Macnab carded even-par 72 and Telfer returned a 73 at the Montgomerie Course for a third round total of 145 that moved South Africa into a tie with England on five-over. Kajal Mistry posted a non-counting 77.

Now the trio have their sights set on a top 15 finish on Spring Day.

“We woke up to blue skies and sunshine, but it didn’t last long,” said Womens Golf South Africa President Sally Greasley. “The wind showed up early and grey clouds blocked out the sunshine, so there we were in five layers, including wet weather clothing to keep out that cold breeze.

“The girls played some fantastic golf, but once again the putters let them down. We left at least six birdies out on the course due to lip-outs and pace issues. The pins were in very difficult positions and one wonders where they will be put today. Anytime the ball lands in the wrong place on these raised greens, it disappears and too strong putts are severely punished, as well.

“A few wayward drives ended up in the traps and Caitlyn and Kajal both disappeared from view as they attempted to get out of a couple of deep bunkers that guard some of the greens. As the scores will show, the Montgomerie course took many prisoners. There were more scores over par than birdies achieved by all the groups playing the links course.

“We are very proud of the girls for reaching the top 20 and today is another day. They are certainly capable of producing great scores, so we are heading into the final round upbeat and determined to close the gap and make South Africa proud.”

GolfRSA National Coach Val Holland said the discipline in the camp has been incredible and she hopes the reward will come in the final round.

“The players have gone out with a daily plan and goal and they stuck with it, even though the results does not show this,” Holland said. “They have been really disciplined and stuck to everything we’ve given them through the national camps. They are going out in today’s final round on the O’Meara Course with the quiet determination to score low to finish in the top 15.”

PHOTO – Team South Africa’s Kajal Mistry playing out of one of the deep pot-bunkers on the Montgomerie Course in the third round of the 28th Espirito Santo Trophy at the 2018 World Amateur Team Championships in Ireland; credit GolfRSA.