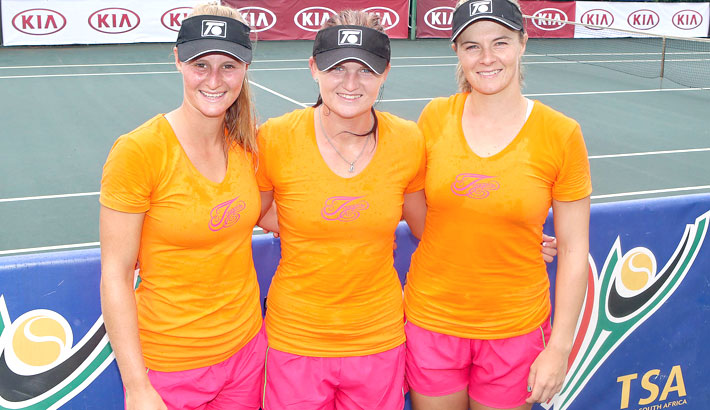 “Topspin would like to congratulate Chani Scheepers, Chanel Simmonds, Michelle Sammons and Ilze Hattingh on their selection, and wish them the best of luck for the upcoming competition in Estonia.”

The KIA SA Fed Cup team arrived in Estonia on Sunday for this week’s Euro/Africa Zone Group 2 competition, to be played from 4 to 7 February.

Topspin SA who represent the mother body in South Africa said they were pleased to be part of the 2015 KIA SA Fed Cup team. “It is an honour for us to supply tennis gear and clothing to the strongest Fed Cup team in many years” said Topspin SA representative, Philip Van Antwerpen.

Topspin also commended KIA Motors South Africa for their sponsorship towards the team, and said that the involvement and commitment of big and small companies is the only way to ensure that talented South African players receive the opportunities that they deserve.

Topspin was established in 1987 in Hurth, Germany, as a pure tennis company with a clear statement, “by real tennis players for real tennis players”. Topspin started with customising tennis rackets, and in 1990 launched their first line of tennis apparel.

Topspin’s highly rated strings are manufactured in Germany and have received many accolades. Their new ball on the market “unlimited Code” was awarded best ball by Tennis Magazine in August 2014, and their wide range of coaching and tennis equipment is sought after in more than 30 countries.