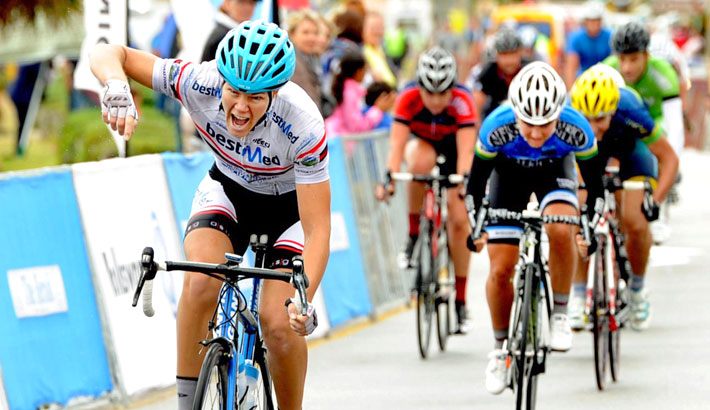 Team Bestmed-Multihull-ASG’s newest signing Maroesjka Matthee got their season off to a flying start with a win at the 30th edition of The Herald VW Cycle Tour in Port Elizabeth on Sunday.

Track star Matthee put her powerful turn of speed to good use as she outsprinted 13-time winner and PE-based favourite Anriette Schoeman in the finishing straight to take a rain-soaked win in the 106km Classic in 3:00:13.

Matthee, who won gold in all six events in the omnium at the African continental track championships two weeks ago, said she had felt confident going into the final sprint to the line.

“I felt there was a headwind, and then Anriette attacked early. So I just went on her wheel immediately.

“Probably with about 50 metres to go, I kicked and I could go over in first position.”

It was sweet justice for the 26-year-old Capetonian after losing to Schoeman by the same split-second margin in the Stellenbosch Cycle Tour at the end of November.

“Coming from a track background, I knew I could leave it as late as possible.”

Matthee, who also won the Cape Town leg of the Engen criterium series last season, said she was delighted with her result, considering that the conditions at the PE race had been so hazardous.

“It was very treacherous with the wind blowing, and the rain, and it was very cold.”

She said she had been surprised that the elite women had started with the veteran men (age 30-39).

“We had to follow the moves and then some of the guys got away on one of the steep climbs and I was pretty happy about that because all the ladies were together in the bunch with the remaining veteran guys.”

She said the women rolled together for most of the route, with very few attacks taking place.

“The rain was really hectic and visibility was quite bad – I was taking my glasses off and on, off and on.”

Content to sit in the bunch and conserve her energies, Matthee played it safe until the final scenic stretch along Marine Drive.

“On the climbs, I felt quite confident and didn’t push myself too hard. So, with 10 kilometres to go, I still felt strong and my legs were feeling very good.”

The powerful sprinter turned on the afterburners as the ladies hit the home straight to snatch the certainty of a hometown win from Schoeman’s grasp.

“I’ve been racing on track for the past six or seven years and last year I started doing a lot of bigger road races.

“With results like these, I’m pretty confident that I can be a good road rider if I continue to work on things like climbing.”

Photo 1 caption: Maroesjka Matthee pictured winning the Herald VW Cycle Tour in Port Elizabeth on Sunday. A new signing for team Bestmed-Multihull-ASG, Matthee won all six gold medals at the the omnium at the African continental track championships two weeks ago, and relied on her track successes to wait till the final moment before passing Anriette Schoeman for the 106km season-opening road race. Photo: Mike Holmes/The Herald