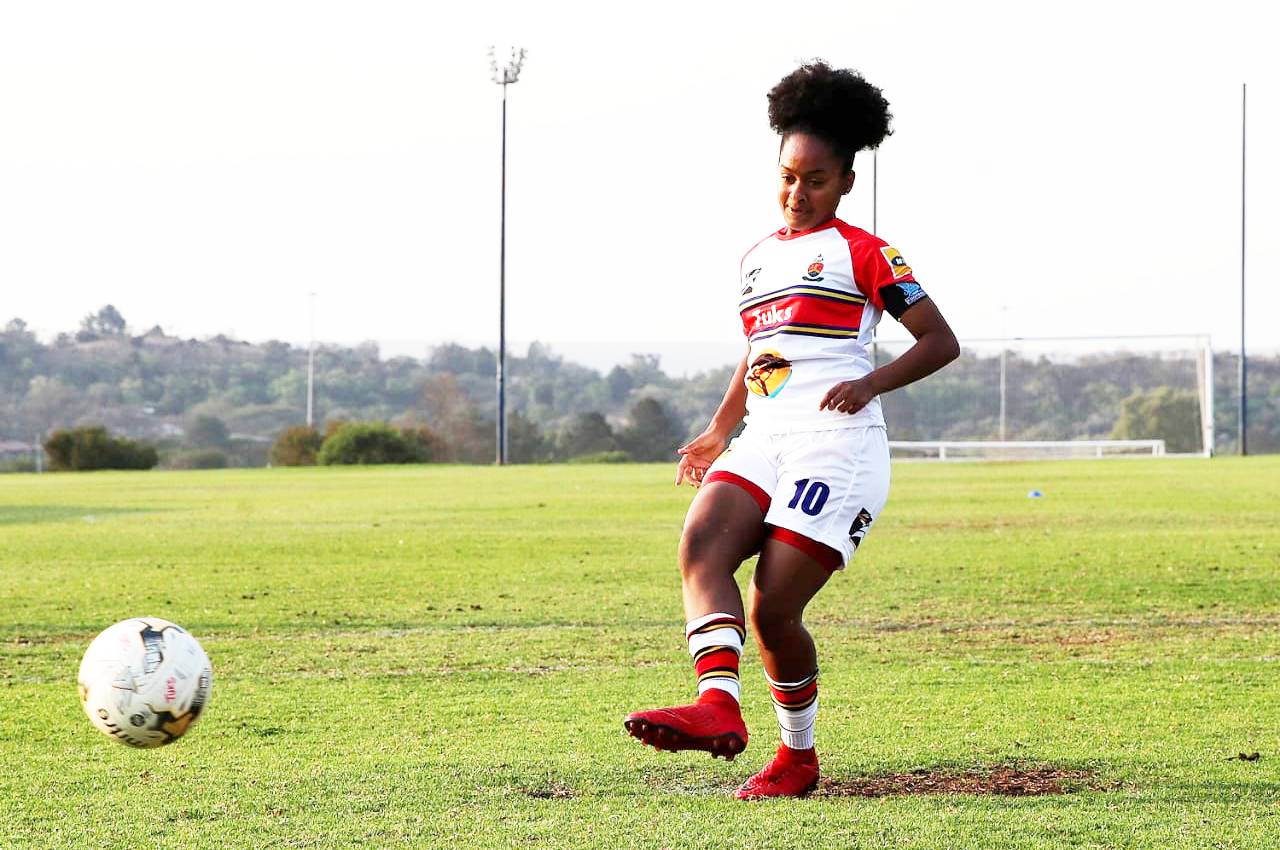 Talented Tuks Varsity Football captain, Thalea Smidt, is keeping a positive outlook while nursing a leg injury that has kept her out of action for eight months.

Smidt’s injury came at a time where she was beginning to enjoy her game and had started to make her mark in Varsity sports.

Although her injury halted her football career, it gave her extra motivation to complete her Post-Graduate Diploma in Digital Innovation, which she was awarded on 7 May 2020 in a virtual ceremony held by University of Pretoria.

Smidt’s latest qualification comes after she completed her BSc Honours (Plant Sciences) in 2018 also from UP and she plans to keep going, eventually eyeing a PhD.

Football is a short career and Smidt admits that her setback made her realise that it could be taken away from her in a blink of an eye. She encourages all athletes to study and ensure that they have another career path to fall back on.

Smidt has had her fair share of challenges and setbacks, but she is looking to use these life lessons to make her childhood dream of obtaining a professional contract and representing Banyana Banyana a reality.

Having played football from the age of 9, Smidt is determined to lead the way for young girls who dream of playing football one day by showing them that their dreams are a possibility.

Speaking with Celine Abrahams, Smidt chats about developing a love for football from a young age, the power of education, and fulfilling her football dreams.

Thalea, congratulations on your graduation. Please tell us about what you were studying at University of Pretoria.

Thank you so much!

I completed my BSc Honours (Plant Sciences) in 2018 also from UP, and last year I completed my Post Graduate Diploma in Digital Innovation, which was awarded virtually on 7 May 2020.

What has it been like having to juggle your studies and your football career?

It hasn’t been easy; in fact, it has been really challenging. However, these challenges I managed to overcome by setting my priorities straight, proper planning, discipline, hard work and constant dedication. It has always been difficult to be a student athlete; you want to do well on the field and on the other hand you do not want to neglect academics. For me I had many days where I had to sacrifice sleep, all in the name of trying to balance both my academics and football.

Last year, you suffered a serious leg injury in a match against TUT in Potchefstroom, meaning you could not play football. How did that impact your life?

I think it was a really difficult time for me. It came at a time where I was really enjoying my football and where at the time our team (Tuks) really looked promising. So, for me it was mentally and emotionally challenging because I had to deal with the fact that I can’t do much for myself (during my recovery period) and still trying to finish my PGDip in Digital Innovation.

“I just thanked God that I could walk out – yes with a broken and shifted bone fully damaged ligaments all around – but with the reassurance that I will be able to play again.” – Tuks Varsity Football captain, Thalea Smidt

I think the injury just made me realise so many things. Firstly, how grateful one has to be to be able to have two legs to walk because on my occasional check-ups at the hospital I encountered different types of people as I was going in and out by the orthopaedic surgeon. I just thanked God that I could walk out – yes with a broken and shifted bone fully damaged ligaments all around – but with the reassurance that I will be able to play again.

How have you been out of action?

Currently I am still out of action. I was given a minimum of being out for nine months and on May 20 it will be eight months in my recovery process. I have been doing well with my rehabilitation and my comeback seems to be around the corner.

What kept you motivated as you were still busy with your education?

If I could be honest with you, it was hard to find motivation because I literally couldn’t move much for about three months and it was difficult for me to get around much with my crutches. However, something that kept me motivated was watching YouTube videos of how elite athletes came back to participate after suffering serious injuries. I remember my phone was full of these videos and these videos usually kept me sane.

In terms of education, I told myself that I’m going to make sure that I finish this course, whatever it takes! I told myself that I was going to be a Digital Innovation graduate. I think with that it’s the power of speaking things into existence because I believe what you give power to has power over you. For me I didn’t allow anything to take my power that was going to hold me back. Therefore, I pushed myself as much as I could to make sure I completed this course.

From your experience and seeing that your career could be taken away in a blink of an eye, what advice would you share with other athletes on the importance of backing yourself with a degree?

I would tell them that football is a short career, because today you can be playing, tomorrow your life can change, and you could be told that you would not be able to play again.

“It is important to make sure that one gets a qualification to have something to fall back onto or even to have it on your right side whereas football can be on your left side. I hope I make sense…” – Smidt speaks on the importance of education

Therefore, it is important to make sure that one gets a qualification to have something to fall back onto or even to have it on your right side whereas football can be on your left side. I hope I make sense…

I will reiterate this – football is a short career and one needs to make sure to get a qualification to fall back onto!

Where does your passion for football come from?

As far as I can remember it was rooted from a young age around 5 years old. I grew up on the soccer field as my father and my brother were both soccer players.

When did you start your career?

I started playing football at the age of 9 amongst boys at Strandfontein AFC, and I think this is the club where I started learning all the basics of football. Further down the line I went to join Santos WFC, Spurs WFC, UWC, and now TUKS.

What was your family’s reaction when you decided that you wanted to play the game?

My family was motivating, I think they saw lots of potential in me from a young age and even today I still have them in my corner constantly motivating me.

Which female footballers do you look up to and why?

The likes of Refiloe Jane, Thembi Kgatlana, Leandra Smeda, and Linda Motlhalo are just a few that I can mention. I think they have started to lay a great foundation for South African footballers.

What are you hoping to change when it comes to the views on women playing in what has been labelled a male-dominated sport?

I think there is a stereotype that women who want to play football think they are men. Even today you get closed minded people saying that football is not for women and women should stay in the kitchen or at home. I want to change this and show many people that us as females have the capabilities to present football just the way men can present football and despite the stereotypical views around football, women can play football and still be feminine, or women can play and be just the way they want to without being judged.

I think if us as women can be given the platform as male footballers we could shock so many people even if it seems far-fetched but this is what I believe, and I believe in years to come these barriers and stereotypical views in women’s football will be broken!

From your experience, what advice would you give to young girls who want to become football players?

That they must work hard, be disciplined, respect the game, take themselves and take their dreams seriously. I would also encourage each of them to study after completing high school as we previously highlighted the importance of education. Continue working hard because you never know who might be watching you.

What are you hoping to achieve in your career in the next five years?

I am hoping to get a professional contract as it has always been my dream from a young age and hoping to be part of Banyana Banyana. Also hoping to have my Masters, and hopefully the goal my PhD and will have people calling me Dr. Thalea Smidt. Most of all I’m just hoping to live a happy life that inspires the next generation and to make the pathway much easier for them to greatness as compared to what it has been in the past years.