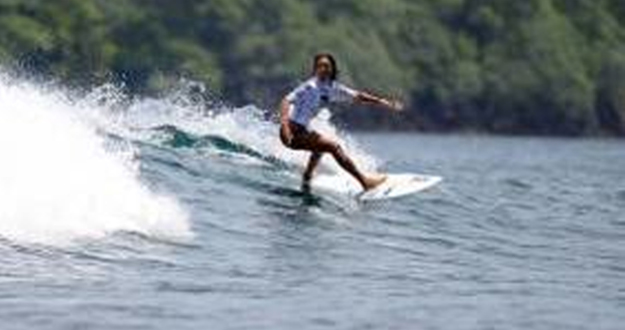 Challenging conditions including an extreme low tide and tiny waves forced organisers of the 2013 Reef ISA World Surfing Games to delay the start of Day 3’s action at Santa Catalina in Panama on Tuesday.

When the contest did get underway, Team SA’s Tanika Hoffman and Fay Zoetmulder struggled to find waves with any scoring potential and even resorted to riding left breaking waves at the predominantly right-breaking reef, before finished fourth and third respectively in their Round 2 heats.

This resulted in the pair dropping out of the qualifying stream and into the repercharge rounds in the double-elimination format.

In a low-scoring encounter that saw just 1.4 points separating first place from fourth, Hoffman and Australian Dimity Stoyle both had scored less than one point with three minutes remaining when the best set waves of the heat rolled in. Stoyle earned 7.17 on the first wave to leapfrog into the lead, leaving Hoffman needing 6.83 for second place.

The 20 year-old from Clifton came up just short on the next wave with a 6.0 that left her requiring 1.50 points. But the ocean went flat and Nataly Bernold (Switzerland) hung onto second place with Valeria Sole (Peru) joining Hoffman in the repercharge rounds.

Zoetmulder (Cape St Francis) also came agonizingly close to securing second place. After Australia’s Codie Klein had jumped out into an unassailable lead by posting scores of 5.83 and a near perfect 9.50 to combo her three opponents in the first six minutes, Zoetmulder fought her way back into second spot, but was overtaken by Maria Lucia Cosoleto (Argentina) in the last minute.

Both SA girls now face a gruelling schedule of seven heats in the next four days to reach the Women’s Grand Final and earn a medal. Anything other than first or second place in those heats will see them eliminated from the event.

Team SA remains one of 14 countries who still have all six of their competitors still in contention after three days. That is expected to change significantly today when 18 Men’s repercharge heats will be run.

Wednesday’s action comprised Men’s repercharge Rounds 1, 2 and 3 with four SA men safely through to Round 3 in the qualifying stream, and Team SA have a day off from competition today with the next report on Friday 10 May.

All the action can be followed live via webcast at www.isawsg.com. Each day’s webcast begins with the Morning Show at 2.40pm (SA time) followed by surfing action starting at 3pm.

The 2013 South African surfing team has been provided with kit by RVCA.